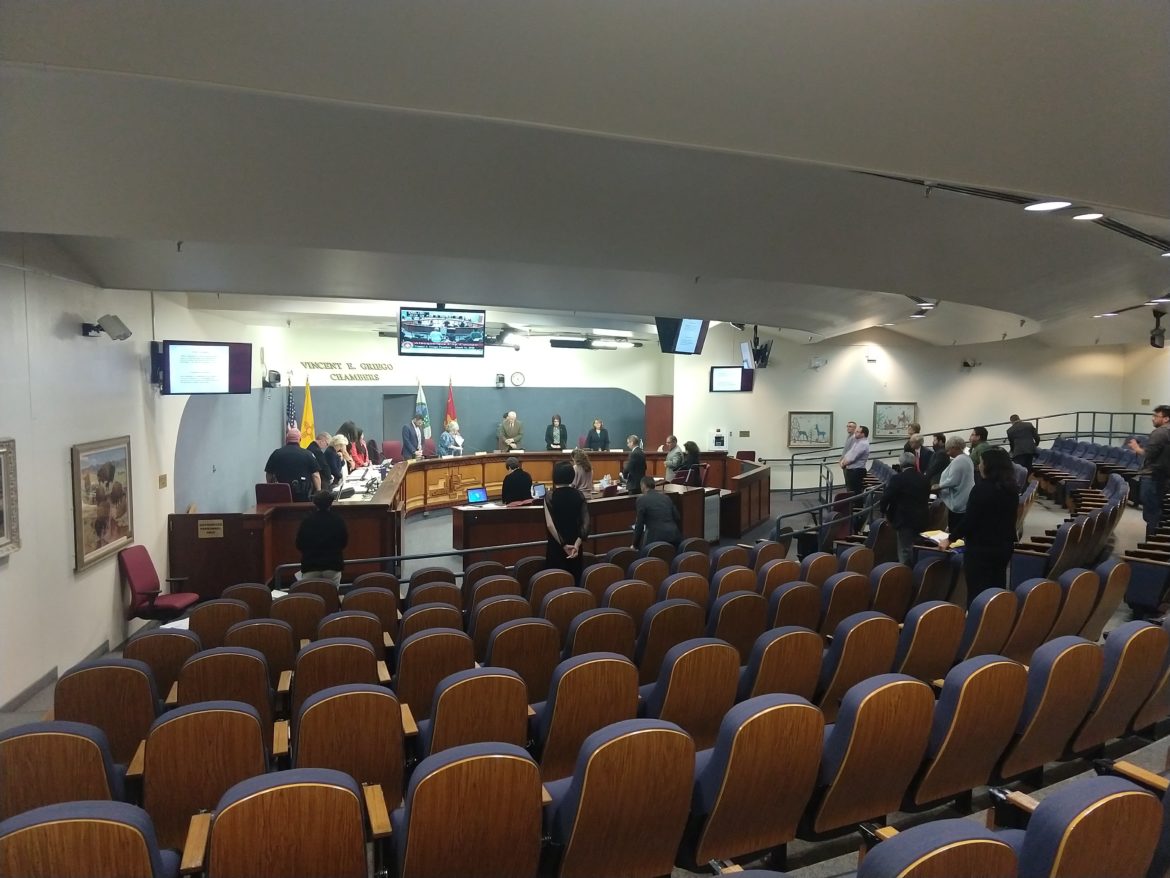 The Albuquerque City Council voted Monday night 6-3 to approve a measure that would allow the city’s mayor to declare a public health emergency and receive federal and state funds. The measure would also give authority to the mayor to limit large gatherings and limit the amount of supplies consumers purchase during a public health crisis.

The sponsor of the proposal, Council President Pat Davis, said he began working on the measure last month to update the city’s emergency provision law that has remained mostly the same since the late 1960s.

“It was clear that we needed an update,” Davis said.

During his opening statement on the legislation, Davis said the city law that allows a mayor to declare a state of emergency was developed during a time of war protests that often led to violence and riots.

But the measure was met by heavy scrutiny by Councilor Brook Bassan, who offered 10 amendments that she said were aimed at being less restrictive to citizens. Only three passed. Bassan referenced a famous quote from Benjamin Franklin regarding giving up rights in the name of safety and raised concerns that the proposal might go too far.

“We are considering surrendering our freedoms,” Bassan said.

The overarching theme from Bassan was that even if social distancing and limiting large gatherings is needed to stop the spread of a disease, it doesn’t need to be dictated by city leaders.

The more-than-two-hour discussion took place in front of only about two-dozen city staffers and three news reporters since the council issued special rules severely limiting who was allowed to attend the meeting.

Before it was passed, Councilor Diane Gibson moved to hold off on passing the proposal until the council could meet again with added hope that the public could add their input.

“It feels weird to have just us here,” Gibson said.

The council accepted written public comment, but with the limitation of who could attend, there was no live public comment period of the meeting.

Just before the meeting began Dereck Scott tried to get into the meeting to speak against the proposal but was not allowed in. Scott told reporters he believed the severity of COVID-19 was being overblown and that he was frustrated that he would not be able to address the council in person.

“This is beyond reproach to cut us out of a meeting,” Scott said.

Councilors’ views on Gibson’s push to postpone a vote on the measure was met with various levels of support. Some councilors argued that waiting until the next council meeting in April could be detrimental.

Days before the meeting, concerns over a previous version of Davis’ proposal were circulated on social media. The original version added public health emergencies to the already existing law that allows a mayor to stop the sale of guns in the event of an emergency. Davis said that law has been in place for almost 50 years. Just before the meeting, Davis offered up a different version that added a new provision just for health emergencies. In other words, Keller will not be able to halt the sale of guns if he declares a public health emergency because of COVID-19.

Both Davis and Keller’s office made announcements Monday in an attempt to clear up any confusion.

Prior to the meeting, Keller spokeswoman Jessie Damazyn said if the mayor declares an emergency it would be to get federal and state funds to combat COVID-19 and not to limit the sales of guns.

“The legislation being considered tonight does not ban gun sales, confiscate guns, prohibit liquor sales, nor does it implement a curfew or close streets, and the Mayor’s declaration will not either,” Damazyn said in a statement. “Anyone suggesting otherwise is wrong, period. Stoking fear and mistrust will only harm our efforts to fight this public health emergency as a unified community.”

Albuquerque Chief Administrative Officer Sarita Nair told counselors that even though Keller supported the measure, it did not come from his office.