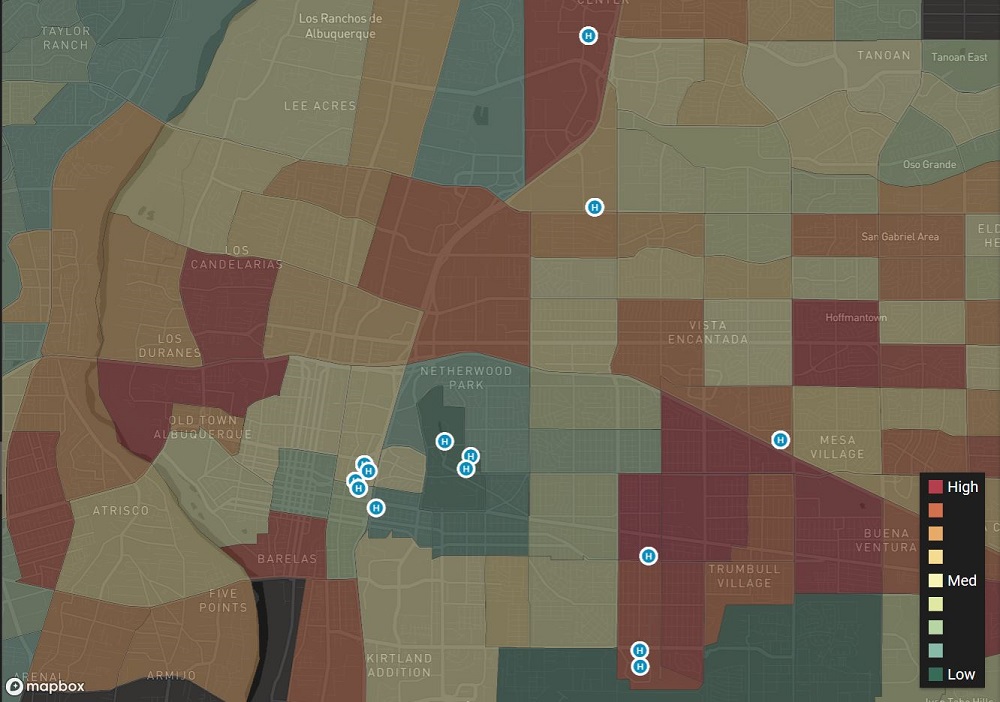 An Albuquerque-based data firm built an online tool for officials and members of the public to use to help fight the spread of COVID-19, the disease caused by a type of coronavirus.

The company, called RS21, helps clients leverage data to address problems and develop solutions. But Charles Rath, CEO and president of the firm, said his employees wanted to flex their skills to help New Mexican residents and officials respond to the COVID-19 pandemic.

The company developed an Urban Health Vulnerability Index, which maps cities like Albuquerque and Las Cruces to highlight areas that are most vulnerable to the disease, focusing on neighborhoods where large numbers of vulnerable populations exist.

“While we’re all going to be affected in some way by COVID-19, the people who are going to be affected the most are the high-risk populations. That’s the elderly, people with underlying chronic health conditions, like kidney disease, heart disease, or diabetes; as well as people who are uninsured, who might be less likely to seek testing for fear of medical costs,” Rath said. “We wanted to identify where there are high concentrations of vulnerable populations, so we could help public health officials, community groups, faith-based organizations, to think about where our outreach may need to occur.”

The tool uses data from the federal Centers for Disease Control and Prevention (CDC) and the U.S. Census Bureau to highlight which areas are at risk.

That information could prove useful to officials around the state who are now scrambling to ensure hospitals have enough equipment and have enough total capacity to handle an anticipated surge in demand for care.

RELATED: A medical worker describes terrifying lung failure from COVID-19 — even in his young patients

The site also tracks community resources, things like donation centers, meal distribution locations, hotlines, government information websites and other services that have been made available in response to the public health emergency.

“There’s been an outpouring of resources and support that people are putting out, but it’s all in different silos. We saw that as an issue a couple weeks ago, and started putting it all in one place for New Mexico,” he said. “If you’re looking to donate food or money, or you want to get tested, it’s all right there.”

The RS21 team first built out the tool for New Mexico’s three largest urban areas: Albuquerque, Las Cruces and Santa Fe. Rath would like to expand to more cities in New Mexico, but finding accurate datasets for those smaller cities and rural areas has proved challenging.

“The data tends to be richer in urban areas than in rural areas,” he said. “Our data science team is aggressively looking for additional datasets, because we know so much of New Mexico is in rural areas.”

But officials across the country — and especially in urban centers — seem hungry for this type of information, too. While RS21 initially developed the index for New Mexico’s largest cities, it wasn’t long after posting the tool on social media that the company began receiving calls from public officials in other parts of the country who were interested in seeing the tool expand to include their cities and states.

“We started getting contacted by public officials all over the country, from New Orleans to New York to Washington D.C.,” Rath said. “We stepped up to the demand, and started including all these additional cities. There’s 13 cities in the tool right now, and as demand increases, we may expand it to other cities across the U.S.”

“This isn’t work that’s being done for a client. RS21 employees are just passionate about our communities,” Rath added. “The main goal of this tool is to save lives, and help vulnerable populations. We didn’t do this as a marketing stunt, we did it because we care about humanity during this time of need. All we care about is that this tool ends up helping people and guide resources.”