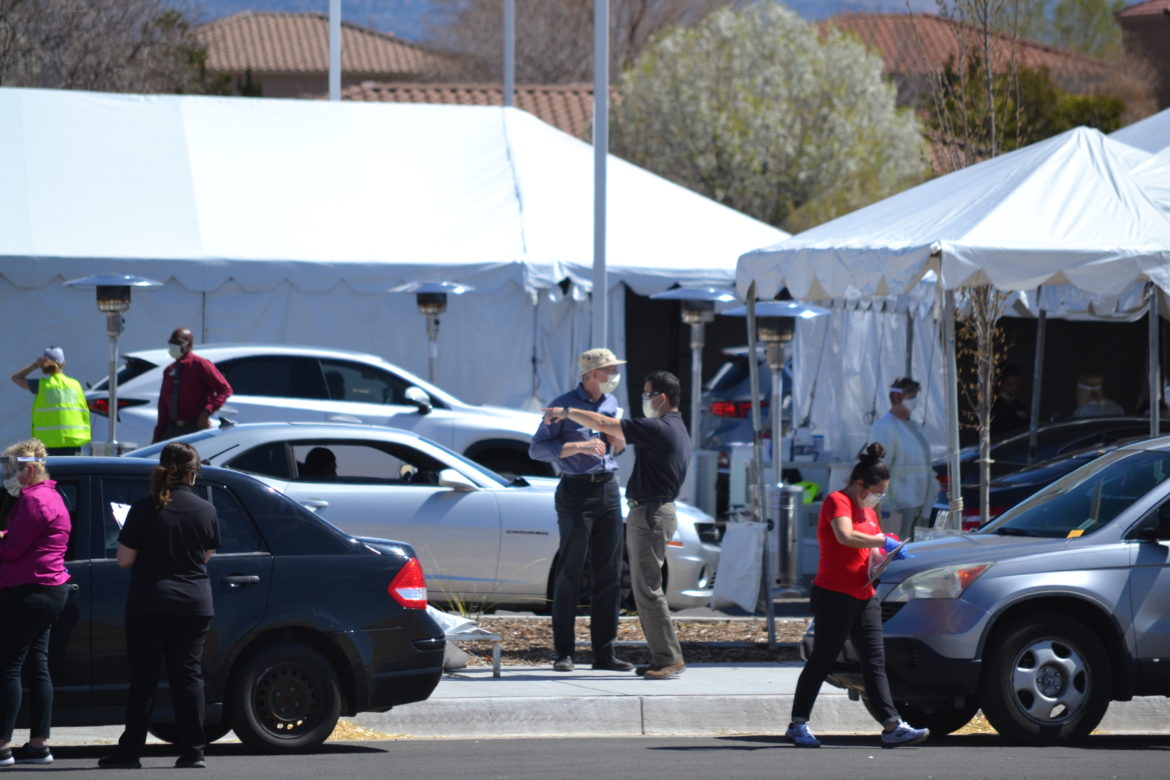 Gov. Michelle Lujan Grisham announced on Tuesday that she is extending the state’s public health order to stay at home until the end of April to continue social distancing.

New Mexico has not peaked yet for COVID-19, a disease caused by a coronavirus. Lujan Grisham and other state officials spoke Tuesday on a  press conference streamed on Facebook about the state’s need to continue social distancing to flatten the curve so COVID-19 positive patients will not overwhelm hospitals in the state. That would cause more deaths, she said.

So far, residents in New Mexico are not staying at home. According to data provided by Unicast, which uses anonymized cell phone location data to track, in aggregate, how much residents move, the state has received a “C-.” Residents in Taos County appear to be heeding the stay-at-home order the most, according to the Unicast map. But eleven New Mexico counties earned an “F” for the amount of traveling residents in those counties are still using.

Social distancing is the only way to slow the spread of COVID-19. Lujan Grisham repeatedly said she is aggressively pursuing personal protection equipment (PPE) supplies but that residents must do their part by staying home. If hospitals become overwhelmed with patients, people will die unnecessarily due to a lack of capacity, she said.

The public health order extension means that only businesses deemed essential can remain open for in-person operations. Public gatherings of any kind can include no more than five people. Casinos and horse racing facilities, excluding those on tribal land, remain closed. Hotels, motels, RV parks and other lodging facilities will continue to operate at no more than 50 percent of capacity. Grocery stores and other retailers will continue to limit the sale of health care supplies and other necessary goods to no more than three items.

The state Public Education Department said last week that students will continue distance learning through the end of the academic year.

Lujan Grisham said that many churches will conduct Easter service on April 12 either through televised programming or via the internet. One church is asking parishioners to drive to the parking lot but stay in their cars for the service in order to practice social distancing, she said.

Lujan Grisham said “strategies are being discussed,” about how to ensure people stay home. She said she has relaxed shipping regulations so more goods can arrive in less time so residents are less inclined to panic shop for food and supplies. Panic buying has caused stores to be depleted of many necessary items, particularly toilet paper.

She also acknowledged that in many rural parts of the state, residents must drive long distances to shop.

“We need to bring more services to individuals,” she said.

She said the state expects to “have issues” with broadband in some areas, making it impossible for students to use the internet for distance learning. She said alternative ideas are being discussed such as a telephonic call-in for those students.

She also said that before the end of the week, an economic team will have a call-in news conference and leaders from the business sector and economic development leadership around the state will be invited. During the conference officials will answer questions on federal and state loans and grants and unemployment insurance as well as other measures residents and businesses can use during the economic crisis.

Lujan Grisham said she would also like to create a place where residents can call in to get their questions answered, but she provided no timeline as to when or how that will take place.