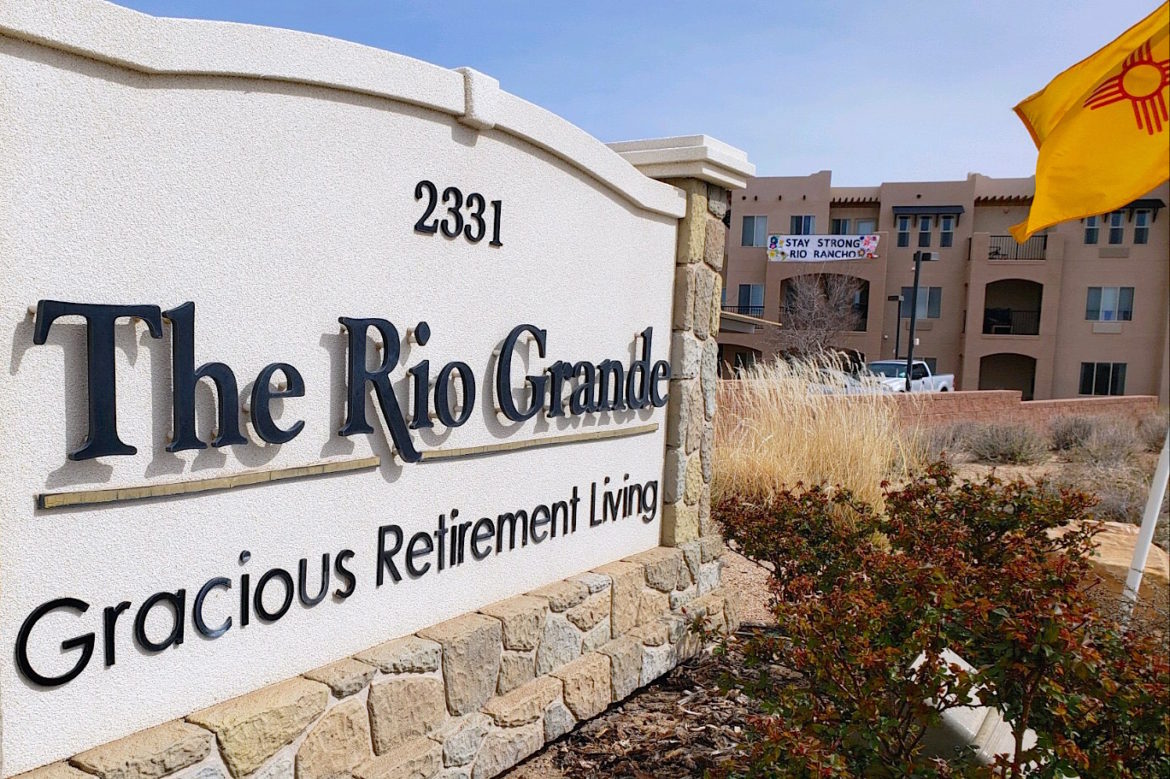 A Rio Rancho retirement and assisted living facility announced a lockdown Sunday after learning a resident had tested positive for COVID-19, New Mexico In Depth has confirmed. The resident is no longer on site, said a company spokesman, who  declined to provide further information about the individual.

The resident appears to be the first publicly confirmed case in a New Mexico senior living facility, but it is difficult to say with certainty. State officials have offered few details about who has contracted COVID-19 in New Mexico.

Senior living facilities are particularly vulnerable during the COVID-19 pandemic, according to The Centers for Disease Control and Prevention, which specifically names nursing homes as high risk facilities. Like nursing homes, senior living and retirement communities are home to groups of  “older adults often with underlying chronic medical conditions,” a high risk category for COVID-19.

After the test came back positive, the Rio Grande Gracious Retirement Living facility ordered residents to remain in their apartments, one tenant and a company spokesman confirmed Tuesday evening.

“We are locked down because we had one case in our community,” said resident Scott Houghteling, reached on his cell phone at his apartment. “We cannot go out of our apartments right now.”

Residents in the sprawling facility, which sits within a mile of Presbyterian Rust Medical Center, have balconies and are able to use those to get fresh air during the lockdown, Houghteling said Wednesday. Residents are not locked into their rooms, he said.

While the facility has banned outside visitors for more than a week and a half — visits from family and friends outside the community were stopped on March 20 as a precautionary measure — residents were able to congregate in common areas during that time. However, Houghteling said, residents were told the individual who tested positive for COVID-19 “did not socialize a lot within the community.”

The visitor ban has been reassuring, said Beverly D. Nabours, whose mother Dorothy is a resident at the facility. Nabours speaks with her mother daily by phone, she said.

The 120-resident facility, which has no on-site medical clinic, is an independent retirement community; residents live in their own apartments, with some assisted living services separately available if needed.

Residents are not being checked for fever, Houghteling said when asked. And residents and families are on their own when it comes to screening, testing and treatment, the company said.

Hawthorn Senior Living, the company that operates the Rio Rancho facility, has asked residents and family members to report symptoms to management and to work with their own personal physicians to arrange medical screening, testing and treatment, Adam Bryan, a company spokesman, wrote in an email.

“We do not provide medical services to our residents; some residents choose to contract with home health services who must also follow screening protocols that we have put in place for our employees,” Bryan said.

Those “screening protocols” involve employees saying they have no symptoms of COVID-19 before each shift, he said.

Bryan confirmed the company is “working directly with public health authorities” but the state health department declined to confirm any details about the case or the state’s response, citing a patient privacy law. State officials have been invoking increasingly expansive interpretations of that law in recent weeks when withholding information about the pandemic in New Mexico.

New Mexico Secretary of Health Kathyleen “Kathy” Kunkel announced Tuesday that COVID-19 testing criteria had been expanded to allow asymptomatic individuals at nursing homes, congregations, and those with close contacts or household members who have tested positive for the virus that causes COVID-19.

In recent weeks, N.M. Department of Health teams have visited all nursing homes and assisted living facilities statewide (269 state-licensed facilities, in all), Morgan said. It was not immediately clear whether independent living retirement communities that have optional assisted-living services, were among the facilities visited. A search of Department of Health survey reports for assisted living facilities Wednesday morning did not yield any records for The Rio Grande Gracious Retirement facility.

Residents were told the lockdown would last 14 days from Sunday, Houghteling said. Bryan, the spokesman for Hawthorn, declined to answer questions about the COVID-19-positive resident’s symptoms. The facility manager, David C. Harper, referred New Mexico In Depth to a company spokesman when reached by phone Tuesday.

The company began implementing COVID-19-preventive measures at The Rio Grande retirement facility on March 4, Bryan said in an email Tuesday evening. Precautions included increased but unspecified disinfection protocols. On March 20, Hawthorn Senior Living “restricted” all visitors at all of its North America retirement facilities, according to a March 28 update posted on the company’s website. Residents have not been allowed visitors “for about two weeks,” resident Houghteling said.

Since confirmation that a resident has COVID-19, the company on Sunday took more dramatic infection control steps, according to Bryan and Houghteling.

“[W]e have implemented our level 3 virus control measures,” Bryan wrote in his email.

Those measures include more extensive disinfection of the facility, a ban on outside visitors, strict controls on who can enter the facility kitchen, and a shelter-in-room order for residents.

“All staff [are] wearing masks and keeping us in our apartments,” Houghteling said. “They’re serving all our meals to the apartments and we put the residue in bags and they come pick it up. They are not cleaning the apartments. They drop sheets off at the front of the apartment – towels, sheets, toilet paper, everything like that.”

Hallways have been repeatedly cleaned during the lockdown, Houghteling said.

Mail, newspapers and medications are being delivered to residents’ apartments, Houghteling added. “They’re handing us meals at arm’s length, both of us are arm’s length.”

Outgoing mail is taken at meal deliveries, according to an undated facility memo to residents.

“I just know that every day is a new day,” Houghteling said. “No one has ever experienced anything like this, so we don’t know what to expect. We’re just doing what we’re told and hopefully we’ll get over it. But in the meantime, we just have to sit it out.”

Late last year, Nabours had considered moving her mother to a facility in Arizona instead of Albuquerque, she recalled. As COVID-19 cases began to be reported in the Phoenix area, she felt relief that she had opted for a New Mexico facility.

“I thought, mom’s going to be safer in Rio Rancho – it seems so remote compared to Phoenix,” she said. Nabours said she doesn’t regret her decision and is very impressed with the facility and its response.