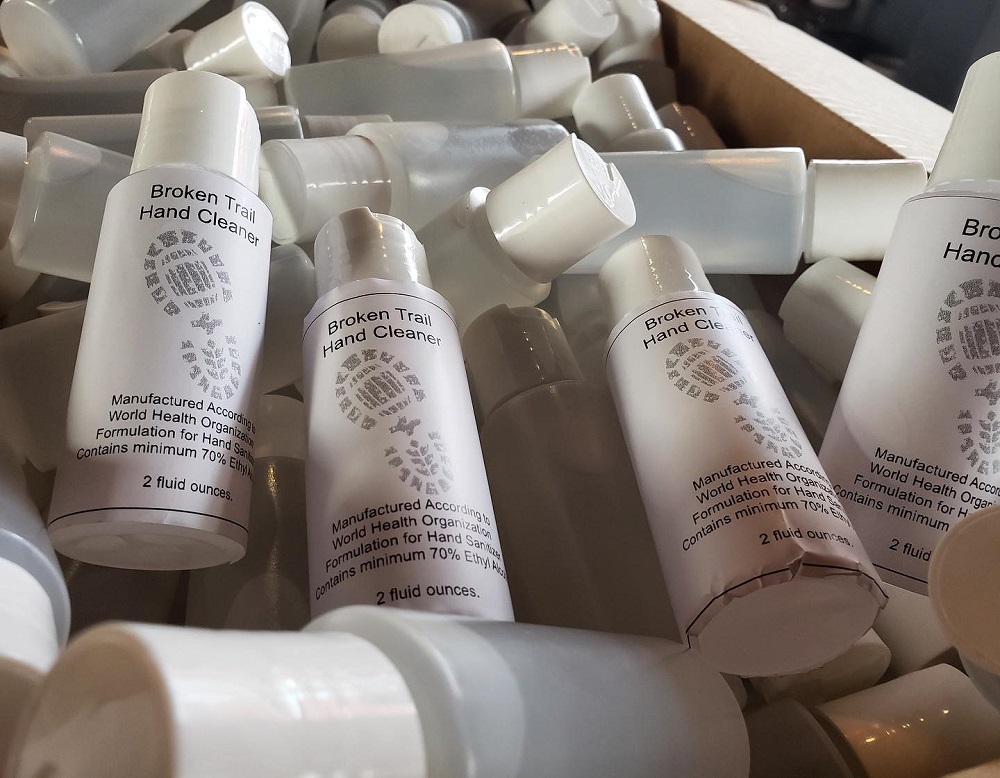 Matt Simonds is doing his part to help stem the COVID-19 outbreak in New Mexico, but the federal government isn’t making it easy for him.

“Everything started with about a thousand 2-ounce containers that we were giving away for free. Shortly thereafter, we were able to get the Fire Department and the Police Department here in Albuquerque almost 200 gallons,” Simonds said. “We created a partnership with Troubled Minds Distilling here in Albuquerque, which is part of Tractor Brewing Company. All told, we’ve been able to fulfill close to a thousand gallons just in the two weeks.”

And that’s just a small percent of what the distillery could be producing, Simonds said.

“We’ve got close to 12,000 gallons of sanitizer spoken for, that we just haven’t been able to produce yet,” he added.

The company is using its equipment to mix batches of hand sanitizer, but is sourcing its ethanol alcohol from other producers, rather than making it in-house.

“Even though we make our own ethanol, and we make whiskey and vodka and rum, for us to make it in the quantities we’re talking about, it would not make any economic sense,” Simonds said. “We’ve been trying to work with some of the major national ethanol producers to get ethanol, and of course they’re scrambling to keep up right now.”

Broken Trail is just one of the local distilleries across the state that have answered the call to make hand sanitizer. But contradicting and confusing emergency regulations from federal agencies is making it hard for distilleries to help keep up with the demand.

The problem? There are two contradicting regulations about making hand sanitizer, coming from two different agencies.

“As a distillery, we’re regulated by the [Alcohol and Tobacco] Tax and Trade bureau. They released a set of guidelines that were very sensible, that said we recognize distilleries can make this, and make this quickly,” Simonds said. But the FDA had released its own set of guidelines on hand sanitizer, and the two don’t align.

The issue has since been resolved, but the snag delayed further production of hand sanitizer.

“It was a really unfortunate case of bureaucracy getting in the way of what’s really an emergency situation,” Simonds said. “Some of the regulations with the FDA have shifted, so that it’s a little bit easier to get the ethanol we need, but there’s only so much out there.”

Rolling Still Distillery, located in Taos, is also producing and giving away hand sanitizer for essential workers and members of the public. The company is making its own alcohol, rather than trying to source it from other producers, said Dan Irion, who serves a head distiller.

“To make the hand sanitizer, it’s actually pretty easy,” Irion said, describing the process by which the company makes its alcohol. The still produces 190 proof alcohol, which is 95 percent alcohol by volume. “We then take that 190 proof to make our other spirits,” he said.

In order to make hand sanitizer, the company dilutes the 190 proof alcohol to 130 proof, which is 65 percent alcohol by volume.

“That follows the CDC guidelines of being at least 60 percent alcohol by volume. At that point, you have something that will kill coronavirus cells,” Irion said.

Rolling Still has been holding events once a week in Taos to distribute the hand sanitizer, which the company infuses with locally-sourced sage and osha root.

“Our lounge was mandated to close down, and we thought, we’re going to be in trouble financially, but so is everyone else,” Irion said. “We have all this product, we might as well do something good with it, so that’s why we’re giving it away right now.”

But Rolling Still ran into another problem that’s plaguing distilleries right now — a lack of packaging.

“This is the big problem. There are not enough of the dispenser bottles,” Irion said.

“We spent a good solid week on the phone with anybody and everybody that we could think of trying to get packaging,” he said.

Broken Trail was able to finally secure packaging when a friend of Simond’s at Dion’s Pizza in Albuquerque helped the distillery procure two semi trucks’ worth of gallon-sized jugs from a vendor. Dion’s also agreed to pay for half of the shipment.

“With all the stress and frustration with what’s going on, and you’ve got really cool, amazing stories like that, it was a bright spot amongst a really dark few weeks,” Simonds said.

Simonds said his distillery is now working directly with the state and the City of Albuquerque to distribute hand sanitizer to those who need it most.

“Right now we’re trying to focus on getting it to high-risk, frontline people,” he said. “What we’re trying to do right now is work directly with the city and with the state so that we can get sanitizer to them, in such a way that they can disperse it to the general public, in a manner that’s a little bit more controlled. They have connection points already in place for things like food and child care, that they would be able to handle that better than we could.”

Rolling Still, meanwhile, has been asking patrons to bring their own bottles to fill up during the distribution events. As of last week, Rolling Still had given away 15 gallons of hand sanitizer to the public.

“We also gave some to the [Taos County] Sheriff’s Department and also to the County [Administrative] Office as well,” Irion said. “This is an easy, no-brainer thing we can do right now. We’re all in this together.”