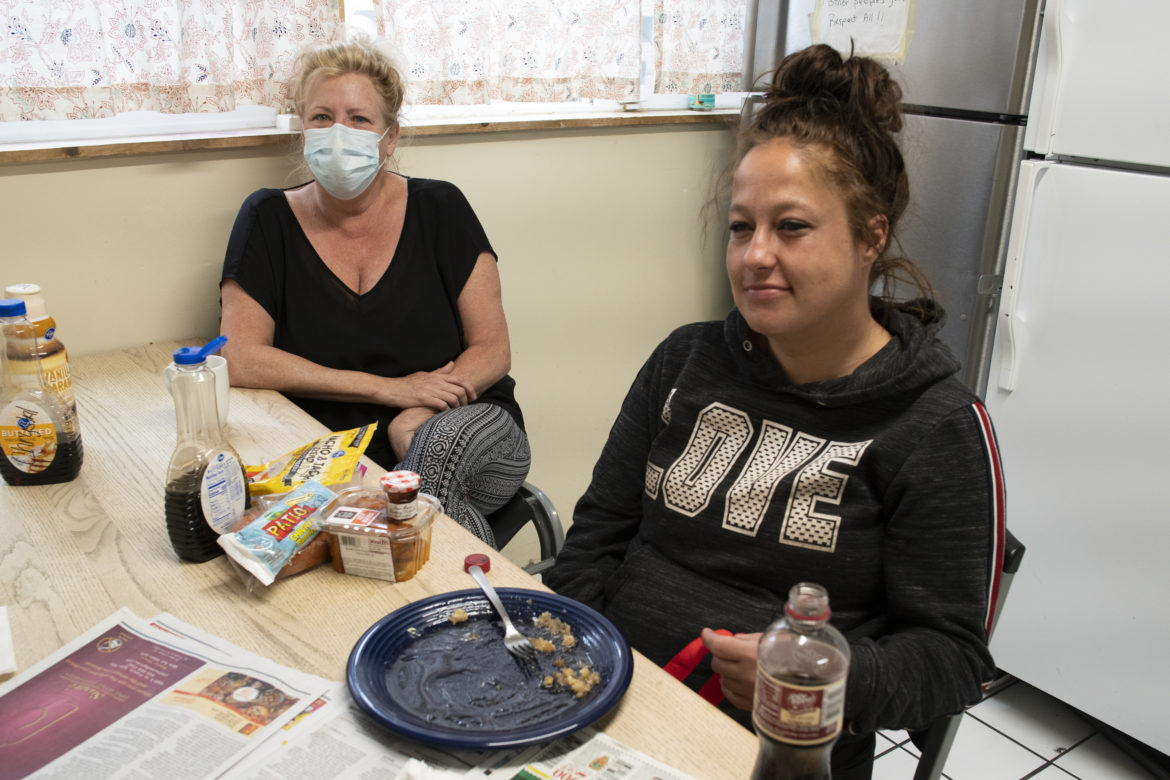 After getting a mask because she sneezed while getting her meds, Stephanie sits with Meagan in the dining room at Casa Familia Shelter on March 17. Less than two weeks later, all of the shelter's residents were moved to a motel for more separation than a mask can provide.

Kinsey Moores steeled her nerves and tried to appear unruffled as she worked intake at Albuquerque’s S.A.F.E House this week. Picking up a pair of gloves from a dwindling supply of donated PPE (personal protective equipment), she reached for a thermometer and asked the now-routine question asked of every person seeking help at the city’s largest domestic violence shelter.

“Have you experienced any kind of dry cough or fever?”

“I just have to keep a smile on my face and show that we’re here to help, we’re not going to turn anybody away,” said Moores, 22, who started her job last August after graduating from the Child and Family Studies program at the University of New Mexico. “One of the hardest things is just coming in to work with a mindset that everything is going to be OK, we’re going to get through this.”

Across New Mexico, domestic violence survivors and the shelters that serve them are confronting a new and uncertain landscape brought on by the coronavirus pandemic. Stay-at-home orders have effectively kept victims inside with their abusers, depriving them of a safe time and place to call for help.

It couldn’t have come at a more ominous time. Last week, domestic violence incidents in Bernalillo County reportedly jumped 78 percent — right in line with soaring unemployment, gun sales and other predictors of abuse.

Yet shelters across the state have become strangely quiet, the number of people fleeing abusive relationships slowing to a trickle. Only a few weeks ago, S.A.F.E. House’s spacious three-story building in Albuquerque barely had room for all the women and their children seeking refuge.

Today, a third of its 85 beds sit empty. Confined to the premises under New Mexico’s stay-at-home order, residents pass the time playing board games in the common area and watching their children in the playground.

“The burning question is, where are these people when we are generally at capacity?” asked Patricia Gonzales, the shelter’s executive director.

“I was joking that I feel like we’re living in the Twilight Zone and every day is a new episode,” said Celeste Trujillo, client services director at Community Against Violence (CAV). Before the coronavirus outbreak, staff at the area’s only domestic violence shelter typically answered between five and 20 calls from new clients per day. Now they receive “only one or two — if even,” she said.

It is hard to know for certain why the number of calls has declined so dramatically, but Trujillo believes it could be because survivors are now having to weigh the risk of violence from domestic partners against the risk of contracting COVID-19.

“The one new client that we did get into the shelter … we picked her up at the hospital, but she had expressed a huge amount of fear coming into the shelter because she didn’t know where all these people had been,” said Trujillo. “[She] was almost wanting to go back home because she felt that that would be safer.”

Shelters across the country are seeing decreasing clientele — a pattern that often follows large-scale disasters, according to Beth Meeks, who was a statewide shelter director in Louisiana during Hurricane Katrina and now works as program director at the National Network to End Domestic Violence.

During past disasters, according to Meeks, domestic violence survivors have hunkered down at home until an opportunity to flee presented itself, creating a lull in shelter activity followed by a wave of people seeking help.

But nothing in recent memory compares to the coronavirus pandemic, which experts say may last not weeks but months.

“In some places, domestic violence survivors who have been injured are not seeking medical attention because they don’t want to risk catching the virus, and they’re hearing that their local medical providers are overwhelmed,” Meeks said. “They’re basically forced to determine, how bad is it here versus how afraid am I of the virus?”

Some shelters in other states have shuttered their in-house services entirely until the outbreak subsides, Meeks said.

New Mexico officials say the state has no plans to close shelters, which are considered essential businesses under Gov. Michelle Lujan Grisham’s order. Her office, along with the Department of Health and the Children, Youth and Families Department (which oversees domestic violence shelters), are working with shelter directors to develop contingency plans for an expected surge in demand.

But those plans are complicated by new guidance from state health officials directing shelters to reduce their capacity, maintain social distancing and identify potential coronavirus infection among clients. Domestic violence groups in Taos and Albuquerque have begun housing shelter seekers in hotel rooms paid for by the state.

Some hotels are meanwhile refusing guests who have signs of illness, while others have closed altogether, shelter directors say.

And amid a shortage of masks, gloves and gowns, intake workers are forced to risk their own personal health in order to screen domestic violence survivors for COVID-19 symptoms. This situation has sparked discussion among shelter directors that workers themselves could need to be housed in hotels during the peak of the outbreak, in order to keep them from infecting their families should they become sick.

“We’re getting very specific directives to do things that we just can’t do at this point,” said Gwyn Kaitis, policy coordinator of the New Mexico Coalition Against Domestic Violence, a network representing the state’s approximately 30 shelters. “We’re supposed to screen people when they come in, and provide masks to people with symptoms. We can’t even get hand sanitizer.”

On March 19, CYFD placed an order for personal protective equipment to distribute to shelters, but Grainger, the state-contracted medical supply company, said it could not fulfill the order. According to CYFD spokesman Charlie Moore-Pabst, the federal government “commandeered” all the company’s protective gear inventory except for hand soap, as such items are now considered “pandemic items” and restricted to medical professionals and first responders. He added, however, that the department has managed to acquire supplies for at least two shelters.

“At this point we have given up hope on any PPE,” said Kaitis. “We’re just trying to figure out how to keep staff and clients as safe as possible.”

Despite the uncertainty, shelter staff have remained resolute. No employee has left her job, according to Kaitis and shelter directors in Albuquerque and elsewhere.

“I definitely plan on staying here,” said Kinsey Moores. “I made a commitment to the residents and myself when I was going to school for this field that I was going to help everyone no matter what, so that’s what I’m going to do.”