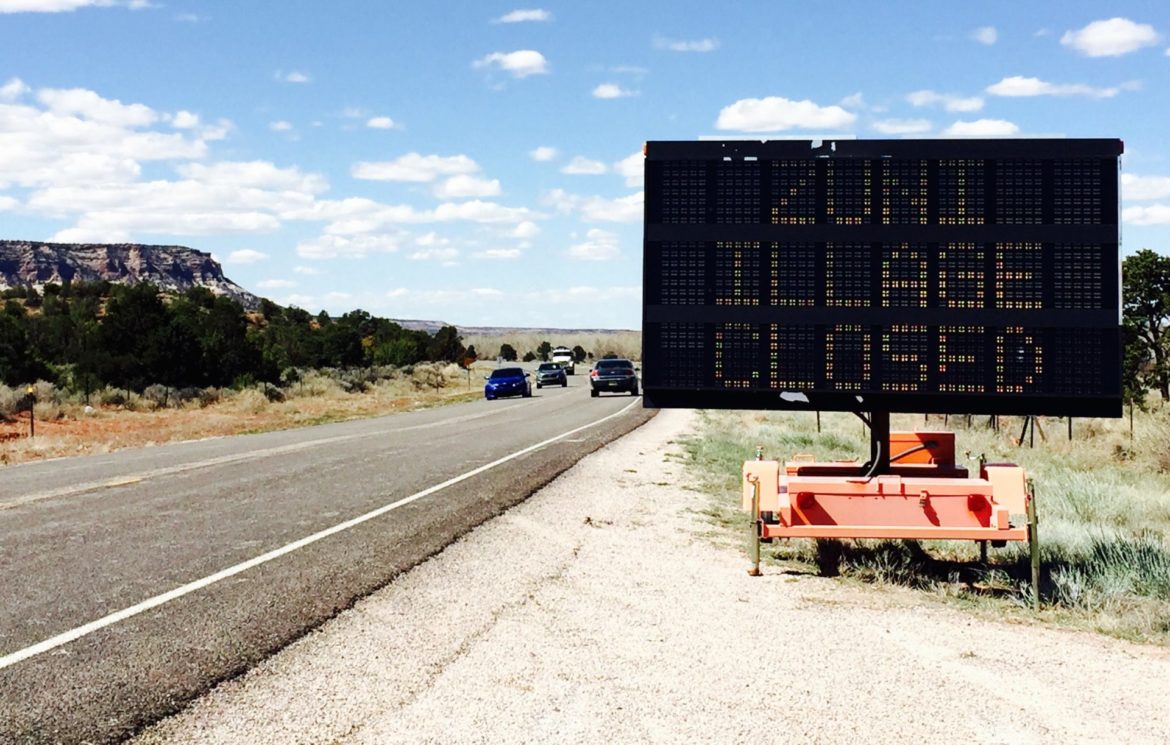 A sign a few miles west of Zuni Village announces the village is closed to travelers.

The governor’s office said Wednesday the state of New Mexico is helping Pueblo tribes erect roadblocks to keep non-tribal members off reservations, as outbreaks of COVID-19 have begun to spread through at least three of the communities —  and expectations are for the virus to impact others. New Mexico is home to 19 Pueblo tribes, with populations ranging from a couple hundred to 10,000 people.

The governor will “go to any length to keep these areas closed if that’s what needs to be done. The state is exploring all mechanisms,” Nora Meyers Sackett wrote in an email today. Meyers Sackett is Gov. Michelle Lujan Grisham’s press secretary.

Yesterday, the office of Lujan Grisham confirmed 31 cases in Zia Pueblo and 52 cases in San Felipe Pueblo, both in Sandoval County. And Zuni Pueblo Governor Val Panteah announced on Facebook 15 cases and one death in his community.

New Mexico In Depth spoke to several Pueblo governors and State Rep. Derrick Lente, D-Sandia Pueblo, on Monday after news of the outbreak at Zia emerged over the weekend. They all expressed a need for the state to help keep outsiders out of pueblo communities. They also spoke of  a need among their tribal first responders for personal protective gear, like face masks, gloves and medical gowns, and wondered how the state might help funnel the needed equipment to their communities. Many pueblo communities are in rural areas of the state, miles away from services with few grocery stories and medical providers, meaning their residents must drive long distances to stock up on food and supplies and for medical care, making staying at home difficult.

New Mexico In Depth sought answers from the governor’s office, about what the state is doing.

“State government is helping Pueblos close the access roads and erecting DOT road signs informing passersby that the roads are closed,” Meyers Sackett said. “DOT also issued a news alert informing people that they are not to hike on pueblo lands.”

New Mexico In Depth drove to Zia and Zuni pueblos today to see what signage or barriers were in place to keep outsiders away. Zia has barriers and a checkpoint established at the entrance to the Pueblo on Highway 550 in Sandoval County. Tribal officials at the roadblock said the checkpoint had up for a couple of weeks ago. Zuni Pueblo is in a much more remote area of New Mexico and has a highway running through the village. There are no barriers in place, or other traffic mechanisms to control through traffic that New Mexico In Depth could see. There is one highway sign a few miles outside of Zuni Village announcing that the village is closed to the “traveling public.”

The state is distributing personal protective gear across the state, via the national guard, Meyers Sackett said without specifically mentioning Pueblos. She said the Department of Health is actively testing at Pueblos, without mentioning specific tribes, and will be setting up additional “screening and specimen collection” on tribal lands.

And she said the state has open lines of communication with mayors and emergency managers in counties that overlap with Pueblo land to set up “supply distribution points” to reduce the need for tribal members to travel.

“DOH has devoted resources specifically to the state’s indigenous populations to ensure that state government is doing everything possible to assist them,” she said.

Trip Jennings contributed to this report.