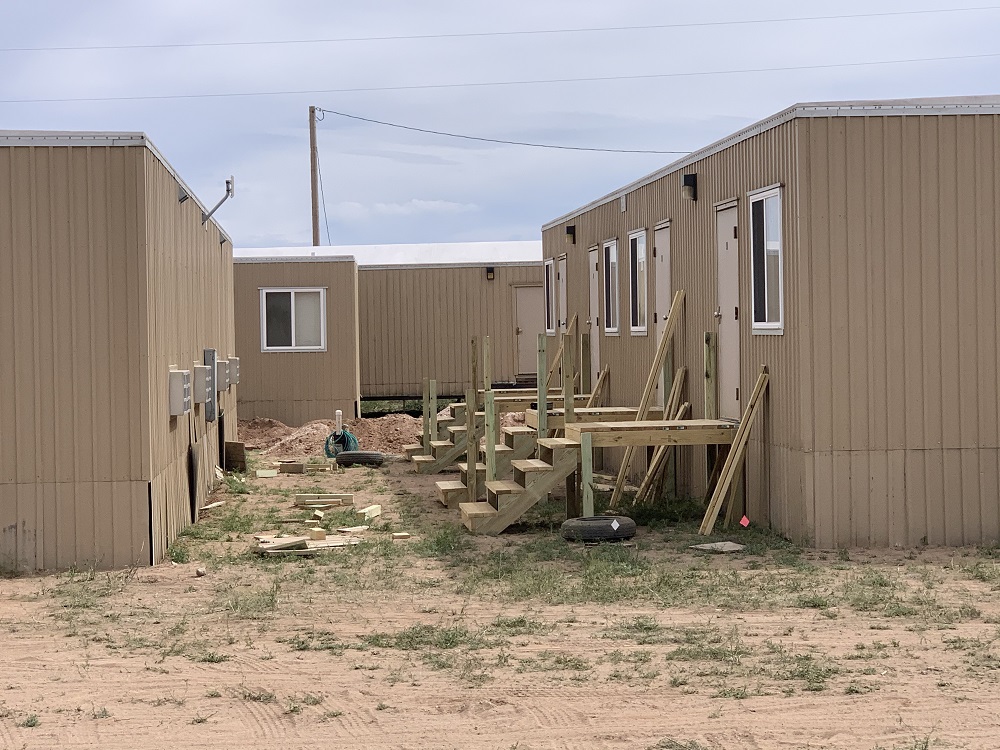 Residents in the tiny town of Columbus, New Mexico, along the U.S.-Mexico border, raised the alarm about a border wall construction contractor that seemed to be preparing to move in workers from outside the area. Locals are concerned that out-of-state workers may inadvertently spread COVID-19 to residents.

State officials are also concerned about out-of-state travelers entering New Mexico. Last month, Governor Michelle Lujan Grisham signed a stay-at-home order for residents and called for those who traveled to the state by air to self-quarantine for 14 days upon entering the state.

But the order does not apply to federal workers or contractors working on federal projects, which includes border wall construction, according to the U.S. Army Corps of Engineers.

The appearance of the housing project in Columbus, referred to as a “man camp” by some, sparked concerns among residents that Galveston, Texas based construction firm SLS Co, which was awarded a contract to construct nearly 50 miles of border wall near the Columbus Port of Entry, was preparing to move in more workers, possibly from out of state, to continue construction on the border wall in southwestern New Mexico’s bootheel.

“They set up these man camps, they’re like FEMA trailers. They’re in town, they set them up 100 yards from the municipal building in the village,” Ray Trejo told NM Political Report. Trejo is a resident of nearby Deming, and works as the southern New Mexico outreach coordinator for the conservation group New Mexico Wildlife Federation.

“The expectation is that they’re going to be hiring more people. There’s ten of these trailers. Apparently they’re wanting more people so they can fast track the border wall,” he said.

News of the trailers spread through the community quickly, prompting Mayor Esequiel Salas to ask SLS Co to delay moving workers into the trailers until after April 16, according to the Las Cruces Sun News. Salas told the paper that the housing project would house up to 60 local workers and possibly out-of-state workers.  The housing project is now being moved out of town, the paper reported April 9.

NM Political Report reached out to SLS Co for comment on the trailers, and asked about any protective measures or self-quarantine protocols that the company may have in place for out-of-state workers. SLS Co did not comment and instead referred questions to the U.S. Customs and Border Protection (CBP). CBP then directed the questions to the U.S. Army Corps of Engineers.

Jay Field, Public Affairs specialist for the South Pacific Border District of the U.S. Army Corps of Engineers, said in an email that the Corps is prioritizing the safety of its employees, contractors and community members.

Field pointed to wording in the governor’s self-quarantine executive order that states it “does not apply to persons employed by airlines and those performing public safety or public health functions, such as military personnel, federal employees, those employed by a federal agency or national defense contractor.”

Field said contractors have amended their Accident Prevention Plan to the Corps, “to include measures to account for COVID-19, following all CDC, federal, state, and local guidelines that include social distancing, sanitization of shared surfaces (like vehicles and equipment), and quarantining of employees who are sick or experience any symptoms related to coronavirus.”

While the contract workers are exempt from the governor’s order, Luna County locals are still concerned about the possibility of the viral disease COVID-19 reaching communities that have, so far, not seen a single positive case.

“Columbus is so small, there’s maybe three little cafes, there’s one gas station, and that’s about it. The point is, these guys that come in, they’re not going to stay in Columbus. They’re going to come to Deming, and come to our Walmarts, come to our groceries stores, our restaurants. And the simple fact of the matter is that we don’t know where they come from, and we don’t know what they may be bringing to our community,” Trejo said. “If it was under different circumstances, I would [say], you know, people make a living, they gotta work just like I do. But right now, with what we’re dealing with, we need to be pretty sure where folks are coming from.”

“We’re very small. We’re a community of 14,000 people,” Trejo said, referring to Deming’s population. “We don’t have the capacity to hold a lot of people if there was a crisis here.”

The governor’s press secretary Nora Meyers Sackett told NM Political Report that the governor’s office had received word that the housing project has been “taped-off” by the city.

“Our understanding is no new workers had yet been brought in and now, with the lodging off-limits, will not be. And we’re glad to hear it,” Meyers Sackett said. “Completely aside from the merits or lack thereof regarding this project, the health risks were unacceptable in the governor’s view, and she is gratified a New Mexico community will not be exposed unnecessarily via this ill-considered federal initiative.”

“It’s unacceptable that any industry in any part of the state would be carrying on without taking into account the serious hazards posed by the ongoing public health emergency,” she added. “Anyone violating the public health order could be subject to civil or criminal penalties.”