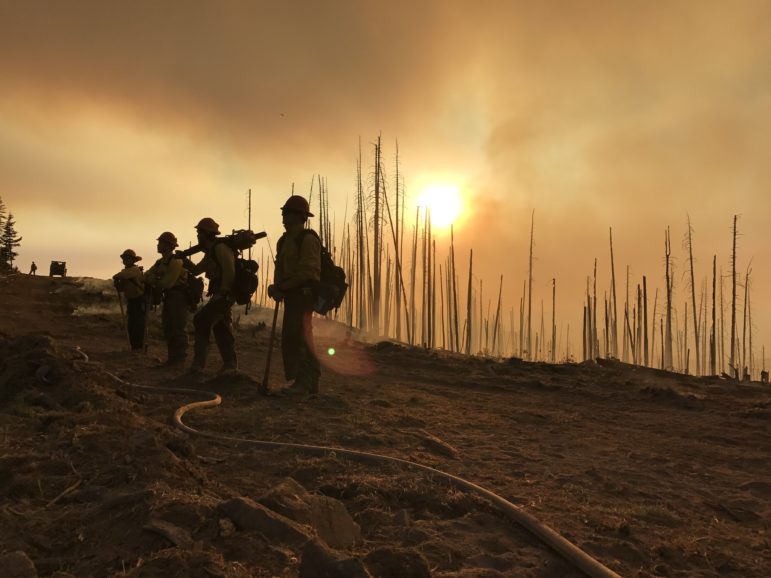 One morning in June 2017, while fighting the Frye Fire in southern Arizona, firefighters began visiting the on-site paramedic complaining of body aches, sore throats, fever, and fatigue. The paramedic diagnosed them with strep throat, a bacterial infection that can pass person to person or through food or water, and sent them to the regional medical center.

Then another crew showed up with the same symptoms. And then, a third.

Medical staff estimated nearly 300 people might have been exposed. They risked overwhelming the local hospital and spreading the infection into town.

Instead, sick crews were isolated, and a doctor and antibiotics brought to them. Other staff disinfected gear, dumped water, and tossed out catered food. People were told to stop shaking hands and use hand sanitizer. They considered these measures a success: Only 63 people were diagnosed with strep throat.

The incident and other infectious disease reports shared through the Wildfire Lessons Learned Center, a federally funded database that works to increase wildland firefighter safety, illustrates how infectious diseases can rapidly spread through fire camps — where large numbers of firefighters live for weeks, or months, when fighting fires.

With the looming fire season ripe for starting blazes in the Southwest, state and federal officials face the prospect of the new coronavirus, COVID-19, spreading through fire camps and potentially jumping to nearby towns, or returning home with firefighters. Crews commonly cross state lines, moving from one fire to the next.

“We do transfer these folks around the country as fires spread and as one state needs these folks less and another state needs them more,” said Luke Montrose, an environmental toxicologist and assistant professor at Boise State University. “In an instance where you’re trying to deal with a pandemic virus, this may be the exact type of activity that ends up spreading this around the country.”

To counter the threat, authorities are changing how wildland firefighters live and work as well as how fires will be managed this summer.

In New Mexico, these measures are already being tested in the field. Wildfires started in early May near Carlsbad, Lumberton, Mountainair and Reserve. Forest Service and local crews quickly extinguished or worked to contain all of them.

But the potential for large fires will increase through May, according to National Interagency Fire Center predictions. This month, the Southwest’s fire risk rises from moderate to high. Already, temperatures have run three to five degrees above normal in the northern mountains. The Southwest Coordination Center forecasts an above-average fire year, which often comes to a close when the monsoon arrives in July.

Wildfire managers in New Mexico have decided to quickly put out all wildfires this season, rather than letting some burn as they normally would. And the Forest Service intends to call for early aviation support. Fast suppression offers the best chance to keep fires small and, with that, fire camps smaller.

“There’s an emphasis on the initial attack and trying to catch fires before they get big,” Larry (Kaili) McCray, chair of the National Wildfire Coordinating Group (NWCG) Emergency Medical Committee established in response to COVID-19. The NWCG helps organize response to wildfire across the country, moving resources, including personnel, around so no single agency must fight a massive fire alone.

The Forest Service and New Mexico State Forestry Division also canceled prescribed burns, normally run to each year to clear undergrowth that fuels large fires, to spare adjacent communities their smoke. Research from Harvard suggests a link between breathing fine particulate matter, like that in smoke, with worsened outcomes from COVID-19. An animal study showed habitually breathing woodsmoke decreases the lungs’ abilities to clear out pathogens.

But some worry those changes—made to protect public health—might pass those troubles on to firefighters.

Extinguishing every wildfire could add up to a longer fire season and one that subjects firefighters to more smoke, said Montrose, with Boise State University, who began studying the health effects of wildland firefighting a decade ago.

“Fires that firefighters otherwise wouldn’t have been suppressing, now they are going to be, so they may be more heavily, more chronically exposed,” he said.

How well firefighters come through the season will be determined in part by how well equipped they are with handwashing stations, mobile shower units, and places to isolate sick firefighters, Montrose said.

With governments already straining under expenses, he worries about shortfalls. More fires will stretch those resources thin, as would a COVID-19 outbreak among firefighters. Much hinges on when and where fires start this season.

One of the chief concerns for firefighter health is where they live when they’re on the job: in fire camps. The NWCG describes fire camps as ideal environments for outbreaks of infectious diseases, with their “high-density living and working conditions, lack of access to and use of soap and sanitizers, and a transient workforce.”

Already, wildland firefighters are familiar with “camp crud,” an upper and lower respiratory tract infection accompanied by fatigue and a cough that recurs among firefighters. Incidences often peak toward the season’s end among rundown immune systems. NWCG documents recommend ramped-up sanitation practices to reduce its spread.

“It’s great that they recognize that, but it may not bode well for COVID-19,” said Montrose.  “In addition to recognizing that it can spread through a camp, they had recognized and documented incidences where [camp crud] had spread from camp to camp.”

“We expect that we’re going to have to fight fire,” said McCray. “And in all of the models that we’ve been discussing, we planned for the worst-case scenario.”

Firefighters travel in crew buggies that carry 10 to 15 people at a time and cluster by the hundreds in fire camps, staying for weeks in the woods with little access to running water. These practical realities make it harder for them to abide by Centers for Disease Control and Prevention advice, like keeping distance from others and washing hands frequently.

Still, fire coordination groups have encouraged those practices and instituted daily verbal screenings that check personnel for signs of COVID-19. Tents will be more spaced out and overall camp sizes kept small. Some support positions — people who manage finances or provide firefighters with maps, for example — will move out of fire camps. Crews will maintain physical distance from one another during briefings, or may do them by radio.

Any new hires will be asked to self-isolate for two weeks, if possible, and monitored to ensure they’re symptom-free. Members of 20-person crews are advised to avoid contact with other crews, outside personnel, and the general public. Camps will be set up so crews can keep to themselves.

These new approaches to outside contact should mitigate concerns within a crew, McCray said, so that when firefighters line up for lengthy hikes, they don’t worry that the person in front of them is exhaling something they don’t want to breathe in.

This season, rapid-containment efforts will strive to keep fires small in part to limit the number of people involved in fighting them. If a fire does grow, Forest Service staff say their goal will be to balance having necessary resources on hand to protect lives and property with minimizing COVID-19’s transmission among both first responders and communities.

If a firefighter does turn up with a temperature above 100.4, that person will be isolated and sent for testing at local health facilities.

The Southwest regional COVID-19 plan says to treat a fever that high as confirmation of a coronavirus infection even if a test is unavailable.

In New Mexico, the state’s Forestry Division is adapting much like its national counterpart. The Forestry Division, which manages 43 million acres, worked with local and tribal partners to create new guidelines for their staff, said Vernon Muller, resource protection bureau chief with the New Mexico Department of Natural Resources.

Those include self-screenings at the start, middle, and end of every shift, even while on active fire assignments, for any signs of sickness. Only two individuals will ride in an engine while a string of chase vehicles transports the rest of the crew.

Crew buggies will carry a fraction of their capacity. Temperature tests will be taken. Meals will be packaged individually instead of served buffet-style. Already, Muller said, two individuals declined an assignment after their self-assessment questionnaire found they or their family members may have been exposed to coronavirus.

But these choices create tradeoffs. Some say it’s still not possible to keep six feet apart, and crowding the roads with almost twice as many vehicles creates a hazard of its own and doubles the workload when it’s time to sanitize trucks and equipment.

And because firefighters are paid only when on-assignment, passing on an assignment because they suspect exposure to COVID-19 cuts into their paycheck.

“That’s a tough one to override in all sorts of employment,” said Travis Dotson, an analyst with the Wildfire Lessons Learned Center. “There’s people that will go to work sick because they need to work, and we will face that as well in fire.”

There’s a cultural challenge, too. Firefighters are accustomed to working long hours, through fatigue, discomfort, and dirt, in the heat, and while shouldering packs of more than 45 pounds.

“‘Gut it out’ culture allows us to be able to do that work, and like so many things, that same culture can promote almost the thing that is going to cause harm, like not reporting an illness,” Dotson said.

He’s seen some change: social media posts of firefighters training while six feet apart from one another and wearing masks.

Some people, Dotson noted, are excited about large fire camps becoming a thing of the past. They’re noisy and crowded, a tough place to stay well and get rest even in good circumstances. A more dispersed model might suit a lot of firefighters, Dotson said, even if it spurs logistical nightmares.

What’ll work best to change behavior, he said, is buy-in at the boots-on-the-ground level.

As reports about how guidelines are working come in, the Wildfire Lessons Learned Center shares them on a mass email list, through social media, and with regional safety specialists. People also use an online forum to ask questions or share ideas.

One “rapid lesson sharing” report posted on wildfirelessons.net from an April grassfire in Montana said firefighters wore masks during their 90-minute drive to the fire — but found them “hot, distracting, and uncomfortable.”

The supervisor noticed people, including drivers, feeling lethargic as a result and, to avoid touching their faces, not eating or drinking water although both are important components of an “alert and functioning firefighter.” More vehicles meant more drivers, he added, requiring someone who just spent 16 hours sawing trees to drive back to camp — “Is this what we want? I don’t.”

Everything needed to be reconsidered: cleaning bathrooms before and after use. Dodging handshakes from crews reluctant to drop that practice. Not taking back a pen someone had asked to use.

In the future, he noted, they will pack extra bottled water and soap so they’re not applying sanitizer to grit-covered hands, and a bottle of bleach for field cleaning. They received sack lunches, but the calorie content came up short, and because firefighters weren’t allowed in stores when they stopped for fuel, they just went hungry — and concerned about whether the person preparing their food wore personal protective equipment.

In that report, the hotshot crew superintendent wrote that while they had talked about and trained with social distance in mind, “It is damn tough to take these practices to the fireline.”

The supervisor said his assistant summed it up best: the agency can’t manage COVID. It’ll need to be managed within individual crews. “We need to limit the spread from unit to unit,” he said. “This is what will cripple us collectively.”