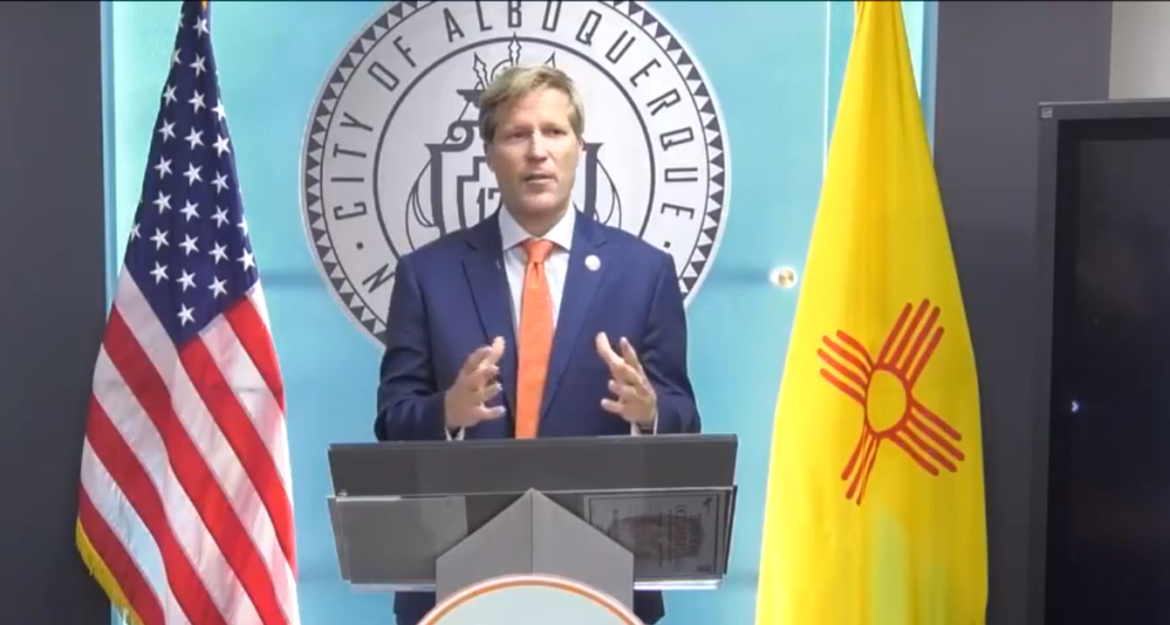 Screenshot of Mayor Tim Keller during a Zoom press conference on May 14, 2020.

The City of Albuquerque is on track to allow businesses and city services to reopen in tandem with the state’s announced easing of restrictions.

Gov. Michelle Lujan Grisham announced in a press conference on Wednesday that much of the state would move to “phase one” of reopening, which would allow retailers, places of worship and other facilities to open to in-person services at limited capacity.

“The city is prepared for this, we know how to go about this,” Albuquerque Mayor Tim Keller said in his own press conference on Thursday.

One preparation that the city was already working on was that the Fire Marshal’s office made placards with temporary occupancy limits. Most retailers will be allowed to open with 25 percent capacity, according to the state’s public health emergency order that will go into place on Saturday. Larger retailers, like big box stores, will remain at 20 percent capacity during the current phase of COVID-19 recovery.

He said Albuquerque was ready to follow the guidelines, but warned that if numbers in the city turn worse, his administration could impose more stringent rules than the state’s, noting that Denver had more strict rules in place than the state of Colorado as a whole.

Keller said the city would largely be asking for voluntary compliance on the requirement to wear masks, and a city official said that Albuquerque Police Department officers would not issue citations but instead educate the public on the need for face masks and provide masks for those who do not have them.

“We plan to reopen in step with the state guidance for phase one, but it’s not going to happen overnight,” Keller said. Many city services would take a few weeks to put back into place, he said, noting that reopening the city’s zoo would need new ticketing processes and training for employees.

Chief Administrative Officer Sarita Nair said the city was aiming to open outdoor cultural facilities by the first week of June. This would include the outdoor areas of the city BioPark, which includes the zoo. Indoor exhibits, including the penguin exhibit, will not open until further phases of the state’s opening, she said.

City libraries would also be opened on a similar timeline, in early June. Before then, the city will install protective shields at library customer service desks, train employees on COVID-19-safe practices and more. When libraries open, there will be no public computer access, furniture, sitting or booking meeting rooms. These would be part of future phases.

“So in the next couple of weeks because of our need to restructure our bids for drivers, we will begin to open up the transit system in mid-June,” he said.

City of Albuquerque prepares to expand reopeningHe noted that many events, like the Rail Yards Markets and the Zoom Music series are currently canceled and that the city is waiting on decisions from the Albuquerque Isotopes’ and New Mexico United’s leagues on whether they will play games this summer.