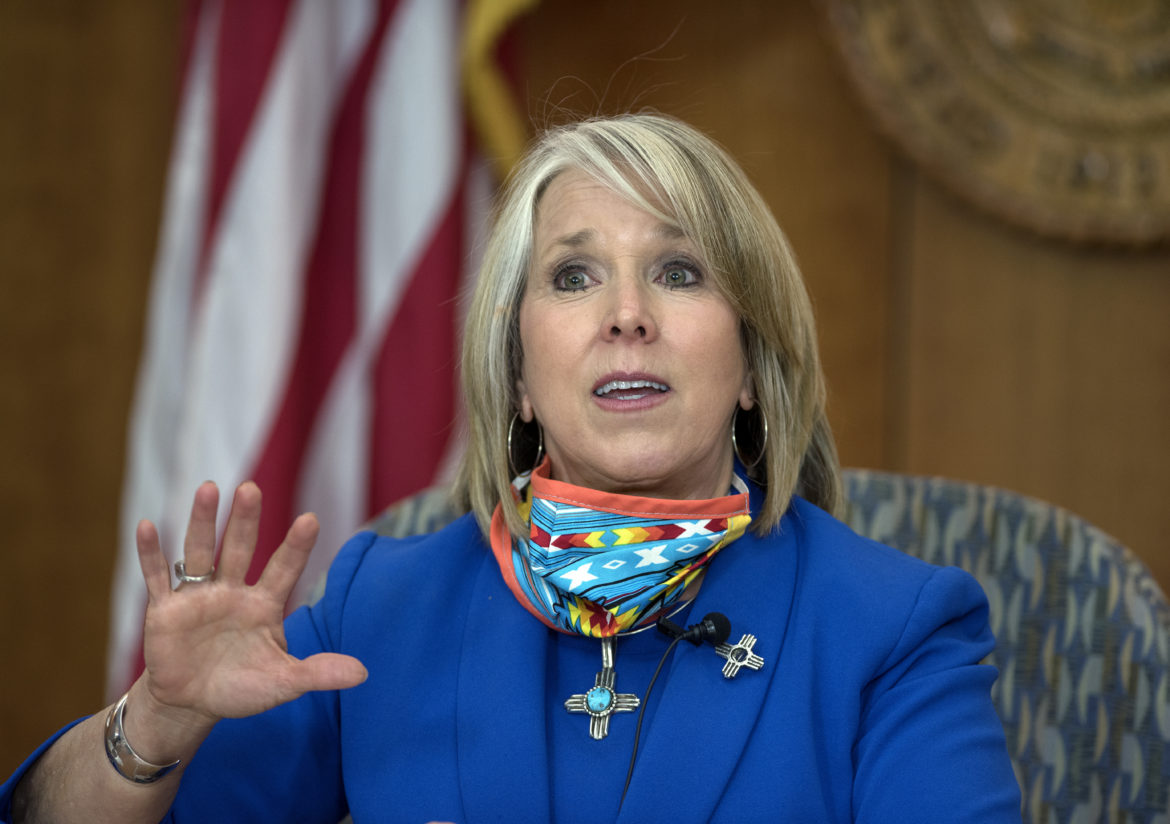 New Mexico Gov. Michelle Lujan Grisham gives an update on the COVID-19 outbreak in New Mexico and the State's effort to limit the impact of the disease on residents. The news conference is being held at the State Capitol in Santa Fe, Wednesday May 20, 2020.

“We think that we’re through the peak,” Gov. Michelle Lujan Grisham said during her press conference Wednesday afternoon.

But, she and health officials warned, without continued social distancing the state could see another peak and have to go backwards on reopening. The governor also announced a date for the state’s special session to address a massive budget hole, which projections said would exceed $2 billion.

Because New Mexico continues to do well in slowing the spread of COVID-19, the governor said that the state appeared to be on track to open more businesses, including dine-in restaurants by the start of June, what the governor referred to as “Phase 1B.”

Much of the state entered Phase 1 of the reopening on May 15, which allowed retail stores to reopen as long as they abided by 25 percent capacity and the COVID-safe practices outlined by the state.

To keep on track, the governor said continuing to socially distance would be important.

“Keep the virus at bay,” Lujan Grisham said. “We keep socially and physically distant, we wear our masks, it means we can keep ourselves on track, give ourselves a little break and support our local economy.”

Lujan Grisham also said the state would not be pressured by the reopening process in other states around the country, or in the region.

“States decided, for any number of reasons, and they are free to do that, to reopen whether or not they meet their own gating criteria or in lieu of CDC initial guidance about what was safe, which the White House initially adopted,” Lujan Grisham said.

She also warned about travel to other states that have opened for shopping or dining at restaurants. She said the state of Texas had slowed the opening of El Paso, near Las Cruces, because of a “containment issue.”

Lujan Grisham said she would call for a special session on June 18, a Thursday, and said she hoped the Legislature would be able to have their business done by the end of the weekend.

She said that the average of budget projections for the state’s deficit, from places like the Legislative Finance Committee and the Department of Finance and Administration, was about $2.4 billion.

Lujan Grisham said guidance from the U.S. Treasury Department on funding from the CARES Act, a COVID-19 relief bill passed earlier this year, meant the state would be able to use much of the $1.2 billion received to aid in balancing the budget.

She said the guidance indicated they could use the money for personnel costs for departments addressing COVID-19, which includes the Department of Homeland Security, Department of Health, the state National Guard, the Human Services Department and more. Still, she said they hoped for more federal help.

“We think there’s sufficient resources, still lining it up, to make sure we can get some economic investments out the door,” Lujan Grisham said.

While she said she didn’t anticipate “deep cuts,” she acknowledged that the state would have to cut spending.

Dr. David Scrase, the Human Services Department secretary, said the state reached its peak in COVID-19 cases in late April or early May—but warned the state could see another peak if residents relaxed their social distancing.

“We feel comfortable with this reopening process,” Scrase said.

He also noted that travel was still a concern, especially as surrounding states reopened businesses. Some cases in eastern New Mexico were from those “who were traveling into Texas for recreational activities and brought it back into this state.”

Still, the rate of spread—the number of people the average COVID-19 cases infects—was below the state’s 1.15 target in most regions, with only the southwest and southeast regions slightly above, at 1.16 and 1.18. With no intervention, the rate of spread is 3.

Additionally, Scrase said the medical system was holding up well. The seven “hub” hospitals, three in Albuquerque and one in each of Santa Fe, Farmington, Las Cruces and Roswell, had 283 ICU beds filled, not all with COVID-19 patients.

“They really only have 230 ICU beds but they found a way to expand their capacity for this pandemic, we’re filling beds above that,” Scrase said.

Scrase said the reopening plans and other COVID-19 actions came from a place of science, noting the Medical Advisory Team was reviewing dozens of scientific articles each day to help guide the state.

“If given a choice of using a little bit of science when we have it or no science at all, I’m proud to be part of an administration that has a bias towards using what data we have,” he said.

“Gov. Lujan Grisham continues her piecemeal solution to our serious problem of treating constituents fairly,” Republican Party of New Mexico chair Steve Pearce said. “We’ve now learned it will be at least June before dine-in restaurants, salons, gyms and other establishments can be considered for a partial reopening. The continued shutdown is killing livelihoods while other businesses are partially opened and national chains take in New Mexico dollars.”