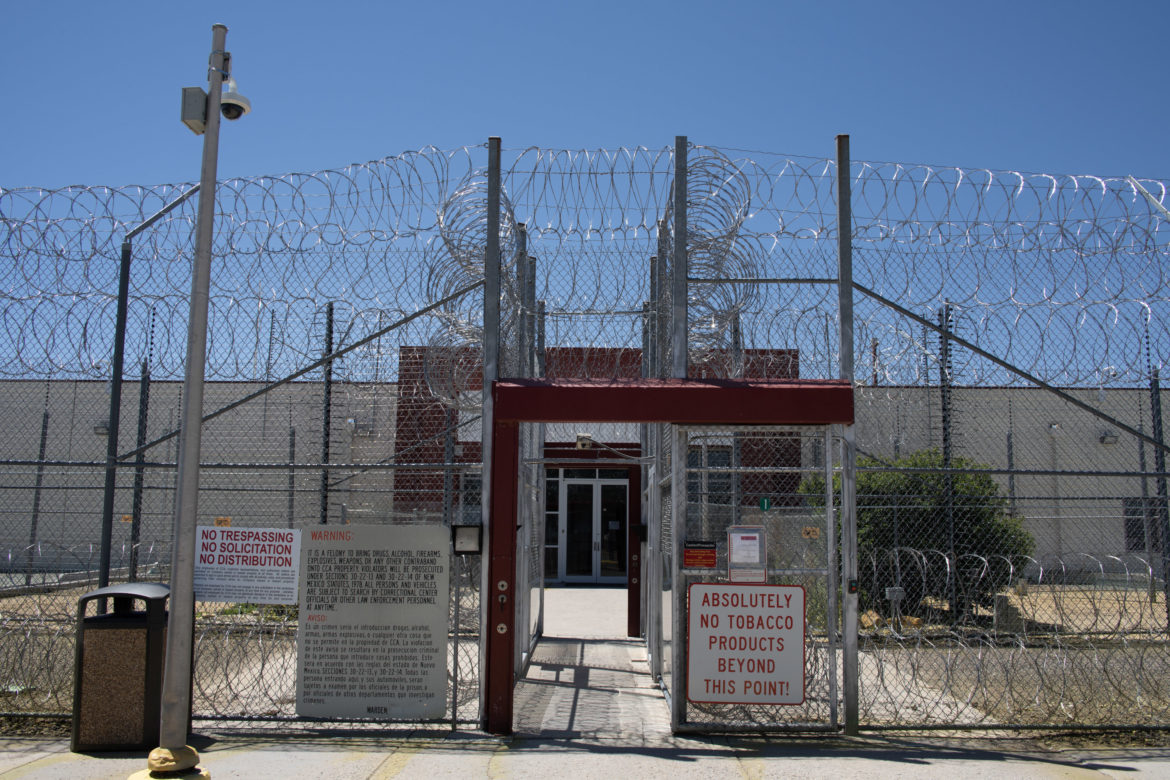 ESTANCIA, N.M. – The migrants were on a days-long hunger strike when guards entered their prison dormitory in full riot gear —gas masks, shields and canisters of pepper spray. The officers corralled the two dozen or so inmates into a huddled mass. Two men fell to their knees, begging them not to attack.

“Suddenly, they just started gassing us,” said Yandy Bacallao, a 34-year-old asylum seeker from Cuba. “You could just hear everyone screaming for help.”

At least one person collapsed. Others shouted for air. Bacallao tried to grab a shirt from his bed to put over the mouth of a man who was struggling to breathe. “The officer sprayed me directly on my face and on my body, and I ran,” Bacallao said. “I felt like I was going to drown.”

The May 14 “attack,” in the words of Bacallao and other migrants, took place at Torrance County Detention Facility, a sprawling complex located about an hour southeast of Albuquerque. Set off from the desert scrub by a tall chain-link fence draped in rolls of razor wire, it is run by CoreCivic, a private prison company, and mostly houses migrants under the custody of U.S. Immigration and Customs Enforcement.

CoreCivic spokesperson Ryan Gustin confirmed the incident and said, in a written statement, that guards “responded to a protest” and used pepper spray “on a group of detainees who became disruptive by refusing to comply with verbal directives provided by staff.”

Gustin declined to say what the migrants were doing to protest and what “verbal directives” they’d been given. He referred those questions to ICE, which did not respond to a request for comment.

A fuller account came from Bacallao and two fellow detainees, who said the attack came in response to a hunger strike the men launched to protest terrible food and their vulnerability to COVID-19. The men were not detained because they’d been convicted of a crime; instead, like others in ICE custody, they were in a sort of immigration limbo, being held until the government could figure out what to do with them. They spoke with Searchlight New Mexico through a translator, though only Bacallao agreed to be quoted by name.

“It felt like I had been burned with gasoline,” said one Cuban detainee who, like Bacallao, came to the United States seeking political asylum. “My throat closed, and I just fell on the floor. I couldn’t speak. I couldn’t breathe. I thought I was going to die.”

Torrance County officials, who last year negotiated arrangements with CoreCivic and ICE to house migrants at the facility, expressed skepticism about the men’s accounts.

“I suspect there’s more to it than what you’ve been told,” County Manager Wayne Johnson said, adding that he didn’t have confirmation the incident even happened.

Torrance County directly benefits from the presence of the detention center. During the last fiscal year, which ended June 30, the county recorded just over $90,000 in payments from CoreCivic, with more money on the way. Johnson said he expects future annual revenue to be about $130,000.

ICE policy allows the use of pepper spray to “gain control” of a detainee. The policy specifies that detention facilities must keep written and video records of any instance when officers use such physical force. Gustin declined to share any documentation of the Torrance County incident.

It is one in a series of many such cases. In January 2019, a federal judge authorized ICE to force-feed migrants locked up in El Paso who were refusing to eat; staff pushed plastic tubing up their noses and piped food directly into their stomachs. Since the COVID-19 pandemic arrived, detained migrants across the county — from Massachusetts and California to Texas — have been pepper sprayed after raising concerns about the conditions of their confinement.

They have reason for concern. The coronavirus is highly contagious and can tear through tightly-packed facilities like prisons, halfway houses and nursing homes.

An outbreak at the Otero County Prison Facility, run by a different private prison company in the southeastern corner of New Mexico, has so far infected more than 700 inmates and killed four. At a press conference on June 24, state officials acknowledged that it’s impossible to prevent the disease from spreading in such close quarters.

In the Torrance County facility, at least 32 detainees have already contracted COVID-19, according to the New Mexico Department of Health. ICE reports 42 total confirmed cases; the state didn’t respond to a question about the disparity.

Irritants like pepper spray are especially dangerous during a respiratory pandemic, according to medical experts. The chemicals induce coughing, increase a person’s chances of catching COVID-19 and worsen symptoms among those already infected.

In fact, it was fear of the impending disease that hardened the migrants’ resolve. Soon after the hunger strike began, the first case of COVID-19 was detected inside the facility, and the men demanded answers: Could they be released into the community while the government figured out what to do with them? What was the status of their legal cases? Would new migrants be admitted into the facility, adding to already crowded conditions?

Bacallao had hoped the facility staff might answer these questions. Instead, on May 14, a high-ranking prison official came into the dorm to deliver a warning. “It was going to get ugly” unless the hunger strike ceased, Bacallao recalled him saying.

The migrants were offered the chance to leave the room and two of them took it, according to one detainee. Bacallao remained.

When it was over, the men were handcuffed with plastic and brought out of the dormitory, their bodies stinging from the spray. Some were carried out on stretchers or wheelchairs, a migrant said. One man had suffered a head wound.

Bacallao was briefly checked by a nurse before being placed in a holding cell with one other migrant. The two could barely see — pepper spray can cause temporary blindness — but they managed to navigate their way to a sink in the cell where they tried to wash themselves off.

The water only made it worse. Bacallao stood still for an hour with his arms outstretched; it was too painful to let anything touch his skin.

Though several migrants told Searchlight that they had been injured, Gustin said that medical staff “reviewed” everyone “involved in the protest” and that “no injuries occurred.”

A desperate search for safety

This is the third time Bacallao has sought political asylum. He first tried to flee Cuba about five years ago with about a dozen others on a makeshift boat a little smaller than two king-sized mattresses. They were headed toward Cancun, Mexico, and planned to make the rest of the journey by land.

At the time, the United States was operating under the “wet foot, dry foot” policy: Cuban migrants caught at sea were turned away, while those who arrived by land were allowed to stay. Since 1959, when U.S.-backed military dictator Fulgencio Batista was ousted by the Cuban revolution and Fidel Castro established an autocratic government, more than a million Cubans have immigrated to the United States.

Bacallao wanted to join them. But after a week in the open water, his boat ran out of gas, and the crew jettisoned the motor to stay afloat. The craft drifted toward American waters, and after a few weeks, Bacallao was apprehended wet-footed and sent back home.

Home for Bacallao is the city of Nueva Gerona, the capital of Cuba’s second largest island, Isla de la Juventud, about 90 miles south of Havana. When he was younger, he loved fishing and playing marbles with the neighborhood kids, but he grew to hate the unquestioning loyalty required by the government.

“I wanted to work, and I wanted a better life, and I wanted freedom,” Bacallao said. The Cuban police are corrupt, he said, and they keep tabs on people who are critical of the government. Things took a turn for the worse after Bacallao refused to attend a pro-government celebration; after that, he couldn’t find employment. “I don’t have a life in Cuba anymore because of being against the government,” he said.

Another attempt to seek asylum in the United States in 2018 was unsuccessful — he was sent to a Louisiana prison and then back to Cuba. His most recent escape was last November, when he traveled to Nicaragua and traversed more than 2,500 miles through Honduras, Guatemala and Mexico before finally arriving at the U.S. border — only to find himself victim to the same sort of violence he was trying to escape.

The irony of his situation isn’t lost on him.

“I left running away from communism, from the communist system in Cuba, because I didn’t want to be arrested,” Bacallao said. “And when I come here to the United States, to the freest country in the world, the first thing they do is imprison me.”