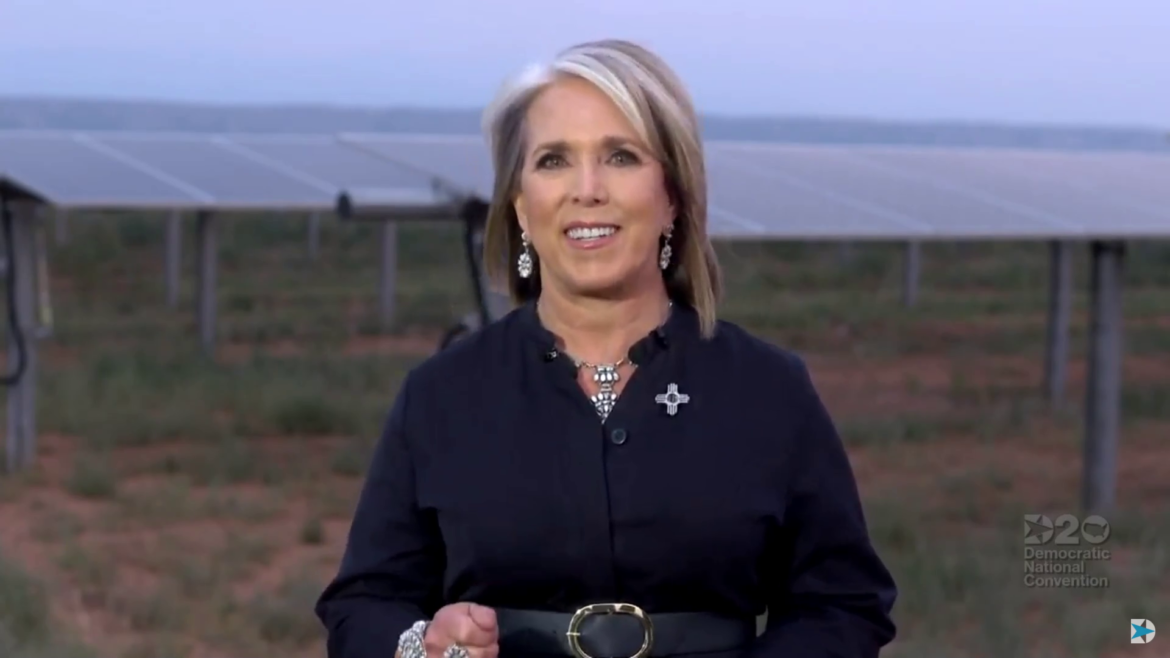 Gov. Michelle Lujan Grisham delivered remarks from a solar array in northern New Mexico, which were aired during the virtual Demcoratic National Convention on Wednesday night.

Lujan Grisham spoke from the Kit Carson Co-Op’s solar array at Northern New Mexico College in El Rito—though the caption said it was in Albuquerque—about climate change and other environmental issues. And she said there was a clear choice between the two candidates this November.

“We know time is running out to save our planet. We have the chance this November to end two existential crises: The Trump presidency and the environmental annihilation he represents,” Lujan Grisham said.

The governor also contrasted the state’s efforts against that of the Trump administration.

“While the Trump administration has been eliminating environmental protections, we’ve expanded them,” Lujan Grisham said. “While they’ve been rolling back regulations on oil and gas, we’ve taken on polluters and held them accountable.

Lujan Grisham also said that the state has “punched above our weight in our successful response to COVID-19.”

Some heavy hitters are scheduled to speak Thursday night—U.S. Senator and vice presidential nominee Kamala Harris will speak, followed by former President Barack Obama. So will Speaker of the House Nancy Pelosi.

Former Vice President Joe Biden will give a speech on Thursday night to close the convention.

The Republican National Convention will take place next week. Republicans have not released a full list of speakers.

Lujan Grisham’s speech took place during the first primetime hour. While PBS, CNN and MSNBC carried it live, ABC, NBC, CBS and Fox News each only aired the second hour, which included the scheduled speeches by Harris and Obama.

“What she fails to tell America is that her state consistently relies on the vital oil industry—40% of our state budget—and that this critical industry pays for New Mexico’s education and other important state needs,” RPNM chair Steve Pearce said in a statement Wednesday night. “The left-leaning governor fails to tell America how her recent policies have destroyed New Mexico’s economy, left thousands jobless and permanently closed businesses.”

“Tonight we saw how leaders like Governor Michelle Lujan Grisham are showing our nation how we can rebuild stronger than ever after years of incompetent Republican leadership,” Elliston said. “We’re excited to see so many strong women of color leading this movement towards a brighter future for all Americans. Democrats understand that we’ve faced unprecedented challenges this year, but New Mexico has shown that by coming together behind strong leaders, we can overcome those challenges and create a more equitable society.”

Lujan Grisham wasn’t the only New Mexico Democrat to participate in the convention.

On Tuesday night, State Rep. Derrick Lente took part in the convention’s roll call, and cast the state’s delegate votes from Sandia Pueblo. Lente was born and raised on Sandia Pueblo and has served in the state House of Representatives since 2017.

While not from New Mexico, Navajo Nation President Jonathan Nez also was part of a joint keynote address on Tuesday. The Navajo Nation includes portions of Arizona, New Mexico and Utah. Other New Mexicans have had high profile moments at past major party conventions. Former Gov. Bill Richardson spoke at the 2008 Democratic National Convention in Denver when Democrats nominated then-Senator Barack Obama. And in 2012, former Gov. Susana Martinez spoke in Tampa at the Republican National Convention when Republicans nominated Mitt Romney.

Update: Added statements from the state Democratic and Republican parties.