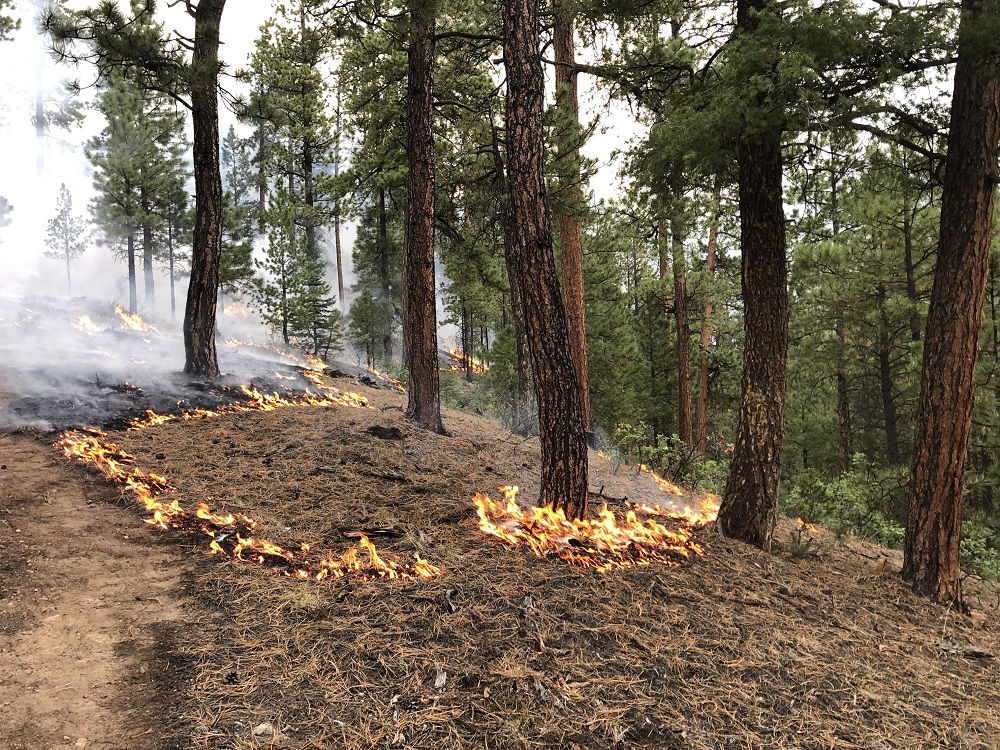 There’s a stretch of land in the Jemez Mountains that has been empty for decades. It’s a burn scar from a fire that burned in the 1950s.

The vegetation is still recovering from that fire. Cynthia Naha, a member of the Hopi tribe who works for Santo Domingo Pueblo, said she saw some trees returning to the area when she visited during a recent trip.

“We’re starting to see some of that timber come back,” Naha told NM Political Report. “Seventy years and you see that regeneration there.”

The 1950 burn scar, along with burn scars left by more recent catastrophic fires in the area, including the Cerro Grande fire of 2001 and the Las Conchas fire of 2011, serve as a historical record carved into the landscape, documenting the legacy of fire suppression that governed forest management for most of the 20th century.

As the climate warms and aridification spreads across much of the west, it’s clear the threat of catastrophic fires isn’t going away—in fact, it’s getting worse. But forest managers are increasingly turning to landscape-scale management, and large prescribed burns, as one tool to keep forests healthy and reduce the risk of a megafire.

“At some level we have a choice,” said Zander Evans, executive director of the Santa Fe-based Forest Stewards Guild. “The choice not whether or not to have fire, because we’re going to have fire. The choice is when we want our fire.”

The U.S. Forest Service (USFS) was created in 1905 under President Theodore Roosevelt. At the time, the agency’s mission was to conserve and manage the nation’s forest resources, in part to support the logging industry.

In the 1910s, the Pacific Northwest — the epicenter of the nation’s logging industry at the time — experienced a spate of intense wildfires, which triggered the Forest Service to adopt a policy of fire suppression, Carril said.

“People at the time realized fire was part of the landscape, but the policies overrode that and we suppressed fires for a really long time,” Carril said, pointing to Smokey Bear, the USFS’s mascot for fire prevention.

“Smokey Bear is as popular as Santa Claus,” he said.

It wasn’t until the 1960s when the National Parks Service “started seeing the effect of fire suppression and what impact it had on vegetation and ecological processes” in California’s fire-adapted landscapes, he said.

“They reintroduced this idea of burning from an ecological standpoint. The Forest Service wasn’t long behind,” Carril said, adding that up through the 1990s, preserving timber was still a driving force behind USFS management policies. Fire was used as a tool for treating small-scale areas for brush cleanup, he said, until the 2000s.

“Now, we realized hey, we gotta do this at a much larger scale, thinking about landscape-scale implementation,” Carril said. “Prescribed fire was part of Santa Fe [National Forest] activity in the ‘80s and in the ‘90s, but not on the scale that we’re trying now.”

A system of balance

Catastrophic fires are the result of a system being out of balance, said Phoebe Suina, owner of the environmental consulting firm High Water Mark and a member of Cochiti Pueblo. Suina launched her company in the aftermath of the Las Conchas fire to help her community at Cochiti Pueblo deal with post-fire flooding.

In fire-adapted landscapes, frequent low to moderate severity fires will burn all the undergrowth and smaller trees, but will leave the overstory — the foliage in a forest canopy — intact. In areas where fuels have built up over the years, and the forests are too thick with small diameter trees, fires can burn hotter and faster, destroying both the undergrowth and the overstory and killing everything in sight.

“As we’re brought up as pueblo people, you have this symbiotic relationship with this environment. You take care of the environment, and it also takes care of you,” Suina said. If things are out of balance, problems arise, she said.

Suina led rehabilitation efforts at the Los Alamos National Laboratory after the Cerro Grande fire between 2001 to 2005, which included thinning out the small diameter trees and undergrowth and creating fire breaks around the lab. That management helped to restore some of that balance to the forest surrounding the lab, Suina said.

“This is a prime example of resilient forest management,” she said, adding that when the Las Conchas fire hit, in virtually the same footprint as the Cerro Grande fire, the lab was spared.

“It was almost the same footprint that burned as the Cerro Grande, minus the footprint of the laboratory, because we installed fire breaks and reduced the unhealthy fuel load to a more resilient prescription in terms of tree and forest management,” she said.

Re-introducing fire to the land

The Medio fire, which is currently about 75 percent contained in an area northwest of Santa Fe, has burned through areas of the Santa Fe National Forest where fuel had built up and the forest had thickened. But the fire also ran into a burn scar from a prescribed burn that occurred in 2019. That burn scar essentially stopped the fire from moving up towards the Santa Fe Ski Basin. Another burn scar, from the Pacheco wildfire of 2011, also helped stop the fire spreading.

Those burn scars are doing exactly what they’re meant to do, said Sandy Hurlocker, District Ranger at the Espanola District and Agency Administrator on the Medio Fire for the USFS.

“Sometimes we hear folks tell us to go thin it and that would be good enough. But there’s species that are dependent on having fire run through them in order to reproduce and be healthier,” Hurlocker said. “It’s not just a matter of avoiding a big fire, it’s getting fire back in to play the role it’s always played.”

And one of the perks of prescribed burns is that, broadly speaking, forest managers can pick and choose where and when to burn.

“Prescribed fire — making a plan and intentionally lighting a match to burn an area — can be a great way to reintroduce a crucial ecosystem process at the right time, right place, and when we want to, as humans, rather than having the lightning strike choose when a fire returns to the ecosystem,” Evans said.

But prescribed burns are not without risk, and there’s been a learning curve at the Forest Service on how to manage them. The Cerro Grande fire, for example, began as a prescribed burn that quickly grew too large to control due to high winds and drought conditions.

“It’s still one of the nation’s largest prescribed fire disasters to this day. There were a lot of lessons learned from what happened on that fire,” Carril said.

“We originally planned to burn in October 2018, and we just couldn’t get the window for us to be able to burn. It went from being too dry to too wet to too windy,” he said. “There’s a lot of parameters that have to line up before we light.”

And the benefits are clear. Not only do prescribed burns help reduce the risk of catastrophic fires within an ecosystem, but they also help bring the forest system back into balance.

Fire cycles in New Mexico landscapes also act as cleansers, Suina said, clearing a landscape of some growth in order to help support other growth. Take the example of small diameter trees in ponderosa pine forests: with frequent fires, these smaller trees are quickly removed, but the larger trees can withstand the low intensity fires. A low-intensity fire both removes the smaller trees, preventing them from overcrowding, and also ensures the next fire is low-intensity because it removes the fuel.

“It allows for that balance of not too much, not too little, and it would be able to keep that balance and sustainability,” Suina said.

Fire can even help rehabilitate land by removing invasive species that are not fire-adapted, for example, and redistribute nutrients across an area.

“When we talk about fire and when you use it appropriately, you’re actually creating a mechanism of regeneration within our forest systems,” Naha said. “You’re providing valuable nutrients back into the soil which could have been degraded because of drought.”

“Regeneration doesn’t happen overnight, it takes time. Just because we don’t see it happening doesn’t mean it’s not,” Naha said. “Our Mother Earth has a beautiful way of working. Just as much as we take, we have to give back.”

She pointed to a reforestation project she was part of that included planting saplings in burn scars.

“I know that in my lifetime, I won’t see that,” she said, “but in generations to come, they’ll be able to have those trees, and know that we worked hard to re-heal our Mother Earth.”