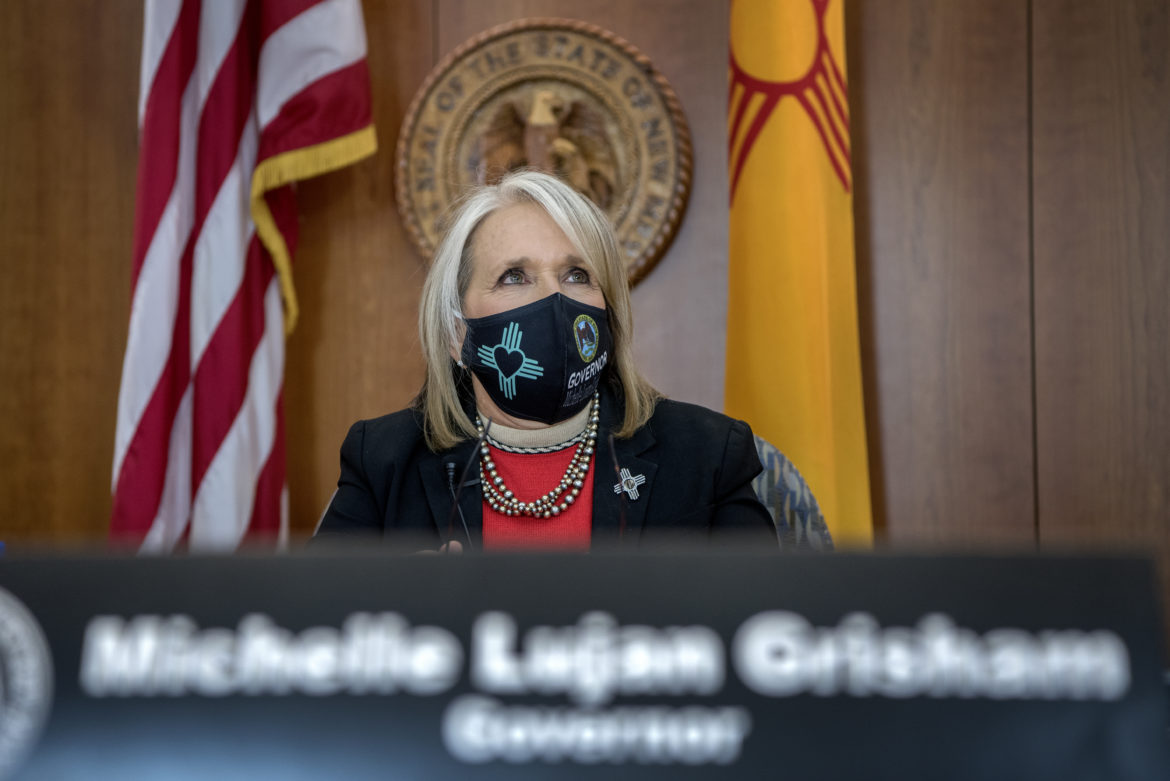 Gov. Michelle Lujan Grisham gets ready to give her weekly update on the COVID-19 health emergency in New Mexico and the state's restrictions to deal with it. The news conference was held at the State Capitol in Santa Fe Thursday September 17, 2020.

The governor and officials said there continued to be good news on the state’s COVID-19 response, as it continues to meet most gating criteria.

Because of this, New Mexico will allow some youth sports practices to go forward as the state continues to slowly lift restrictions throughout the state beginning Friday.

The state will also allow camping at state parks, for New Mexico residents, at the beginning of October.

In both cases, the prohibition on gatherings of more than ten people stays in place. And in the case of youth sports, there will be no competitive games or contact allowed.

The state will also allow ice skating rinks for hockey and figure skating lessons and groups to reopen for ten or fewer mask-wearing individuals, and for swimming pools to open with ten or fewer people. Masks will not be required for those in pools.

Looking ahead to the fall, the state will also allow pick-your-own pumpkin patches and issue guidance and COVID-safe practices for places like corn mazes and haunted houses.

Gov. Michelle Lujan Grisham praised New Mexicans for making the changes needed to allow the state to ease restrictions or, as the governor has consistently said over the past few months, introduce more risk.

“When we’ve got to be tough and strong and we have to tackle difficult issues, we do that,” the governor said of New Mexico residents.

Some counties have not qualified, because of high rates of COVID-19 infections, to allow districts and charter schools within their borders to qualify for a hybrid model.

But, overall, the governor said the hybrid model wasn’t the ultimate goal.

“The goal is not to have hybrid models,” Lujan Girsham said. “The goal is to be able to manage COVID in a way that we can have K-5 as an example where you can still have social distancing and have all of our kids go back. We’re not there yet.”

New Mexico isn’t following the lead of some other states, which have had more reopening despite worse COVID-19 per capita numbers than the state, for a number of reasons.

Lujan Grisham noted that New Mexicans have more chronic conditions per capita and are “sicker” than those in other states.

Also, the governor said, New Mexico has fewer healthcare resources than other states.

She also noted that even those who are asymptomatic and recover without hospitalization could have other issues from COVID, like scarring of lungs.

“We want the same kind of opportunities,” Lujan Grisham said. “We want economic success and opportunity. We want our kids to go to school safely.”

And, she said, it takes longer than just a snapshot to determine the impacts of previous reopenings.

The timing is why the governor said it will take more time to analyze if further reopening would be safe.

But she acknowledged there is hope that, as the weather turns cooler, restaurants would be allowed to have more indoor diners.

“Her lack of action means more students will continue to fall behind because they cannot attend class; bars and entertainment venues remain closed, and many restaurants and other businesses are suffering with their mandated limited capacity,” Pearce said. “Our tourism industry is dying and quarantines remain in place.”

Restaurants were a cause of many rapid responses from the state in July but that number dropped quickly, New Mexico Environment Department Secretary James Kenney, said during the press conference.

A rapid response takes place when an employee of a business tests positive for COVID-19. The state then has a rapid response, which includes other employees who came into contact with the confirmed case and giving the business advice on COVID-safe practices, as well as mandating cleaning of the business.

One reason this could be happening is that just under 350 businesses went through the state’s COVID-safe certification program.

“There’s been a greater adherence to COVID-safe practices,” Kenney said.

Other “sister agencies” deal with rapid responses as well, like the Public Education Department with public schools.

While the healthcare industry continues to lead with the most rapid responses, and actually had more in the week ending Sept. 13 than for the week ending July 26, all the other top five industries for rapid response (restaurants; retail and wholesale; construction; and transportation and warehouse) saw declines in that time period.

One area outside the top five that has seen an increase in rapid responses is among public administration, which would include municipal, county, state and federal employees.

Still, the overall tone was optimistic.

“It really is better news each week,” Lujan Grisham said.