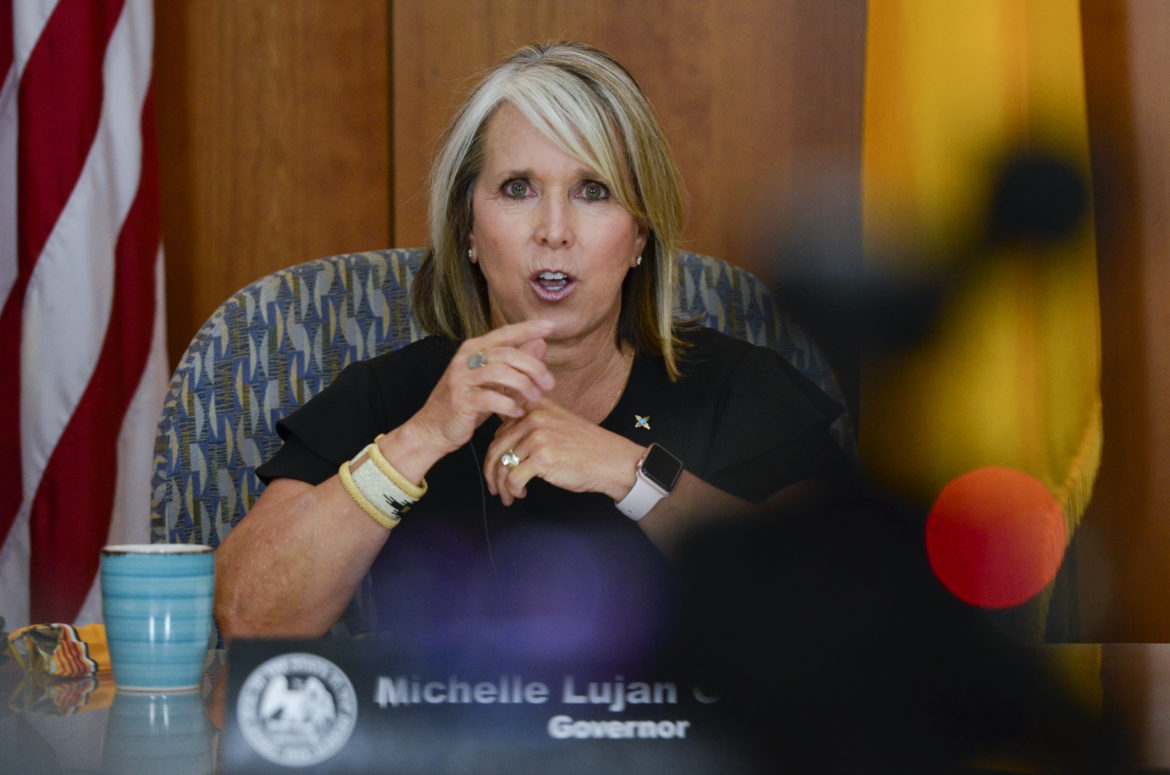 Gov. Michelle Lujan Grisham goes over the latest statistics of coronavirus cases in New Mexico during a news conference Thursday to address the state of New Mexico’s response to the COVID-19 pandemic.

Cases are ticking up in recent days, but Gov. Michelle Lujan Grisham said during a press conference Thursday that she believes New Mexicans can do their part to “crush” the virus.

To do this, the governor said New Mexicans need to “double down” on COVID-safe practices, including wearing masks, adhering to social distancing and to continue washing hands.

She also said that New Mexicans who are experiencing any symptoms should get tested.

“We are diligently chasing supplies and while every week is a challenge, we have sufficient supplies to do 7,000, 7,500 tests a [day],” she said.

She said that they are pushing testing supplies to areas of the state with high positivity rates, like southeastern New Mexico, but they haven’t received the response they hoped for.

In Carlsbad, she said, “we only had a handful of folks come to one of our public health testing sites.”

Carlsbad school officials have encouraged more parents in the area to get tested to potentially bring down the positivity rate and allow area schools to have hybrid learning for elementary school students.

Another aspect of the growth in cases in the growth in “rapid responses,” where the state Environment Department responds to a positive case in a workplace, by testing employees, helping with cleaning, sterilization of surfaces and more. The number of rapid responses increased in the week of Sept. 14-20.

In that week, the cases increased by 250 percent in Bernalillo County, 133 percent in Sandoval County and 100 percent in Doña Ana County over the previous week.

“These are poor indicators and we have the power ourselves to change that trajectory as quickly as possible,” Lujan Grisham said.

She did point to positive information about the state’s limited return to in-person learning. A total of 65 schools have started the hybrid model, with 12,500 students back in classrooms part-time, while distance learning part-time.

Since Sept. 7, 34 students and 27 staff members have tested positive for COVID-19, but 39 of the 71 total positive tests came from those in remote learning, so it was not related to in-person instruction.

“This is certainly more successful reentry than many states in the country,” Lujan Grisham said. “We learned from their mistakes.”

Most large school districts have opted against hybrid learning at this time.

Further expansion of reducing restrictions seems unlikely. She said that while she would like to see racinos be allowed to reopen, “we’re not quite there yet.”

And practices for youth and high school contact sports also had their own problems, though “we want to do as much as we can.”

She pointed to success by some colleges and professional leagues in not having outbreaks, but said that was in part because of the availability of rapid testing.

“We don’t have the bandwidth to provide point of care rapid testing to every single youth sports or high school team in the state,” Lujan Grisham said, noting no state could do so.

She had familiar advice for how the state could get to having such athletics back, though.

“How do we get there? We crush COVID. Right back. We push it right back so we give ourselves a little more opportunity.”