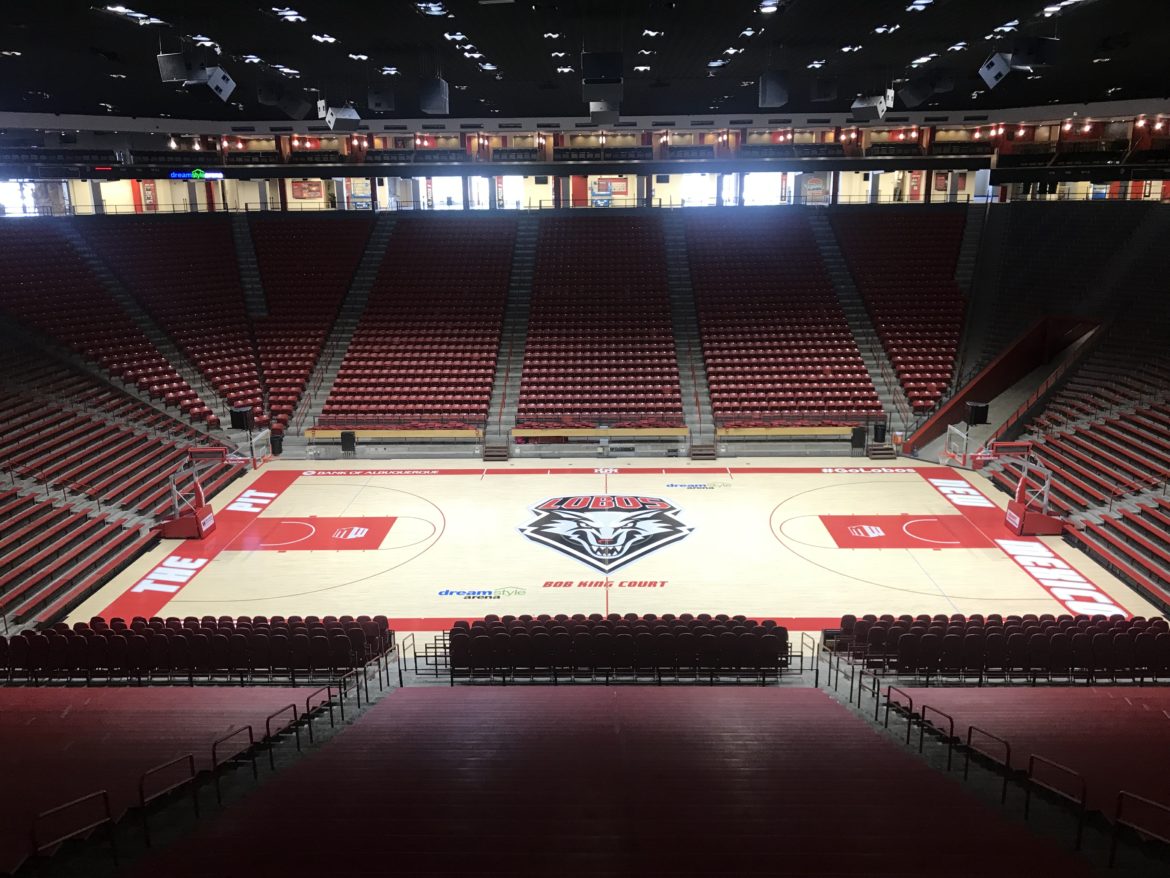 The floor of The Pit.

The University of New Mexico has not hosted a basketball home game at the iconic University Arena, known as The Pit, since early in 2020.

But the arena will soon have crowds again for a very different reason, as University of New Mexico Health announced it would use the property as a site for mass-COVID-19 vaccinations as the state moves to expand vaccinations. The plan is currently to start vaccinations at the site on Jan. 19.

UNM Hospitals Chief Executive Officer Kate Becker said UNM Health said “vaccination is the key to getting past this pandemic.”

She estimated the facility would be able to administer 1,680 doses of the Pfizer vaccine per day, then ramp up to double that number, nearly 3,400, when those who are vaccinated need their second shot of the vaccine. The efforts will focus on Bernalillo County residents.

UNM, like all other health care providers, in the state, places orders for vaccines from the state Department of Health, which distributes the vaccines throughout the state.

There will be no walk-ups, and those who are eligible will have an appointment scheduled through the state Department of Health website as with all other testing locations.

The vaccinations will take place on the west side of the concourse, according to UNM Athletic Director Eddie Nuñez.

“At no point are we going to use the Pit floor,” he said.

“It has a great environment for a basketball game, but unfortunately going down that low isn’t conducive to everyone,” he said.

Becker said that they prefer to have indoor vaccination sites rather than a drive-thru effort.

“We do need to monitor everybody for 15-30 minutes after they have been vaccinated,” she said.

Health officials monitor for possible, but rare, side effects.

The UNMH testing site in the parking lot of Dreamstyle Stadium, the football stadium used by UNM’s football team, will remain and the new vaccination site will not impact the testing efforts on staffing or resources, Becker said.

Executive Vice President for UNM Health Science and Chief Executive Officer of the UNM Health System Douglas Ziedonis said it was similar to how other areas are using sports arenas and stadiums for vaccination efforts.

In San Diego, he noted, ““They’re using the Padres stadium. And these kinds of settings really make sense.”

The arenas and stadiums have space for social distancing, large amounts of parking and are generally close to highways and hospitals.

Other cities and states have announced they would use largely empty sports arenas and stadiums as vaccination sites. In New York, Mayor Bill de Blasio announced that Citi Field, home of the Mets, would be a 24-hour vaccination site. A site at Dodger Stadium in Los Angeles will be able to administer 12,000 vaccinations each day when at its peak.

Health officials said the vaccination effort is welcome, but said people will still need to abide by COVID-safe practices.