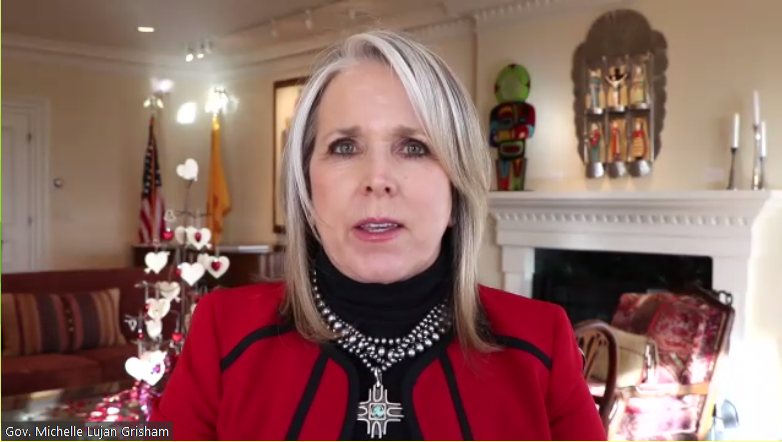 The governor and New Mexico health officials are optimistic that they have enough capacity to administer vaccines—with a bottleneck at the number of vaccines the state receives from the federal government.

Gov. Michelle Lujan Grisham acknowledged that the state has also seen its fair share of hiccups, including an overwhelmed call center devoted to vaccinations because of unexpected demand from the public.

“We should stop underestimating that and we can do better, straight up. We can just do better,” she said.

But she also placed blame on a much-criticized federal distribution of the vaccines to states.

She said she looked forward “to a different environment in that regard.”

President-elect Joe Biden will be inaugurated and become president next week.

Still, the governor said the state thought it was possible for the state to move into vaccinating the general population by the spring or early summer.

“I don’t think our capacity to get those vaccines in the arm will be the rate limiting step, I think it’s that getting that continuous supply and ensuring we get every dose we need,” Human Services Department Secretary Dr. David Scrase said.

He also noted that UNM has been able to get six doses out of every single vial the state receives, instead of five, which will allow the state to spread its supply. The federal government allowed this stretching to six doses per vial of the Pfizer vaccine in mid-December.

Department of Health Secretary-designate Dr. Tracie Collins said the state has received 153,475 doses of COVID-19 vaccine and has administered 100,601 doses as of Jan. 14—which included 38,479 doses in the previous seven days.

And as of Thursday, 412,485 New Mexico residents registered online at https://cvvaccine.nmhealth.org to be notified when a vaccine is available.

The state is moving toward vaccinating those in what it calls Phase 1B, which will start with those 75 or older, those 16 or older with underlying medical conditions that put them at greater risk of COVID-19 complications, frontline essential workers who cannot work remotely and vulnerable populations.

Those in Phase 1A, Collins said, are still eligible to receive the vaccine. These include frontline health care personnel, first responders and those in congregate care facilities.

CVS and Walgreens have contracts with the federal government to distribute vaccines to long-term care facilities. Some states have criticized the pharmacies’ efforts, like Texas and Arkansas.

Collins said New Mexico is “working through some challenges” but that a plan is in place, and the state hoped to have doses in long-term care facilities by Jan. 22 to help get everyone in these facilities vaccinated.

Collins also said the state has had over 140 providers sign up to administer the vaccine and they expect another 300 to do so on the state website.

“So we’re going to have more vaccine providers, which will open up our throughput and get more people vaccinated, per the supply.”

On the spread of COVID-19, Lujan Grisham noted that while there has been a decrease in hospitalizations, hospitals across the state remained over their ICU capacity.

Scrase said that hub hospitals, or the main hospitals in the state, are at up to 143 percent of ICU capacity and that 22 of the 42 hospitals statewide reported critical staffing shortages.

This all comes as the leaders of some hub hospitals say that they are treating the “sickest” patients “that they have ever seen.”

“So we are clearly not out of the woods, with hospitalizations, and all the more reason to follow the advice that you’ve heard already to keep doing what you’re doing when you’re staying socially distanced,” Scrase said.

The state’s gating criteria, used to determine what restrictions are necessary to slow the spread of the disease, likely will not include vaccination numbers, Scrase said.

Instead, the impact would be reflected in the overall numbers.

All of the speakers emphasized that the key way to get out of the pandemic and return to a semblance of a normal life was through vaccinating a significant portion of the public.