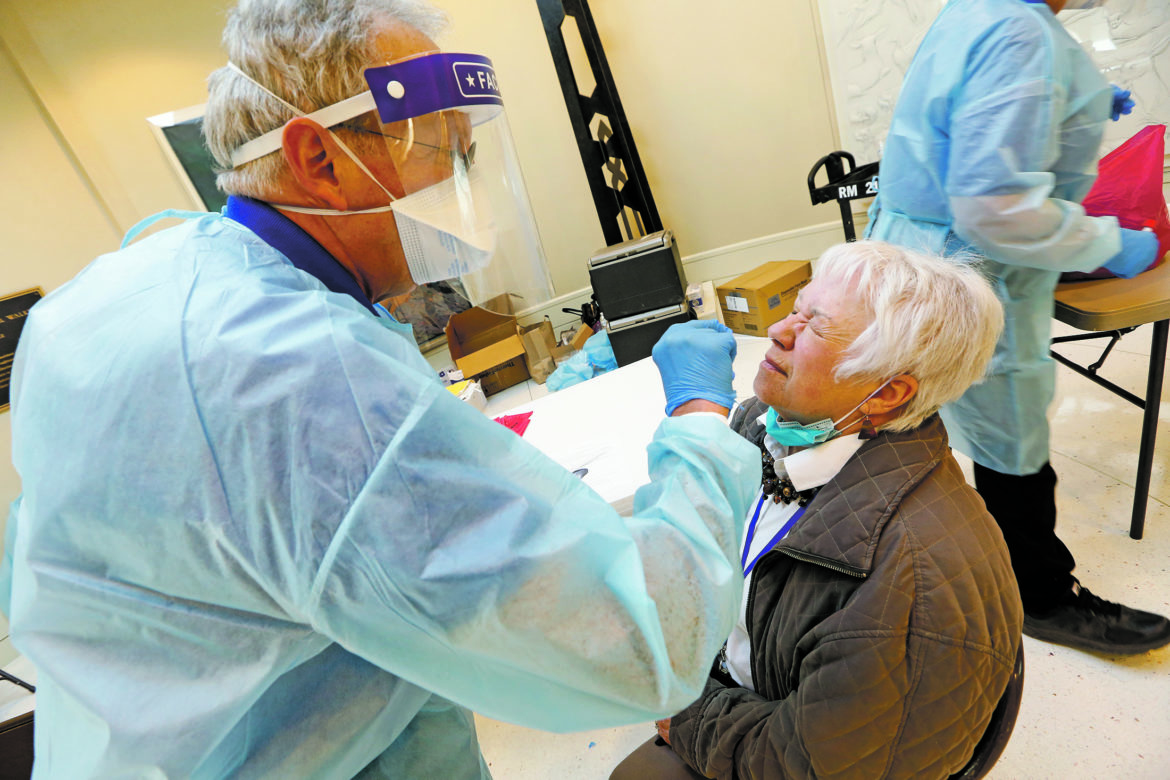 Helena van Heiningen, backup journal clerk in the house, gets tested for Covid19 by John Mayer, volunteer fire fighter and assistant chief in the Tesuque district of Santa Fe county fire, prior to the beginning of the legislative session on Friday, January 15, 2021.

The 2021 legislative session opens this week amid the most unusual circumstances imaginable: fences and barriers around a vulnerable Capitol building, plans for extensive online participation from lawmakers and even a suggested five-bill introduction limit in the state House of Representatives.

And it hasn’t even gotten interesting.

The 60-day session begins Tuesday. Here’s a letter-by-letter primer on issues, people and possibilities as the marathon begins.

A – Abortion. Gov. Michelle Lujan Grisham has announced plans to once again push for legislation to do away with a decades-old law making it a fourth-degree felony to perform an abortion in New Mexico. This year, with more progressive Democrats taking the place of conservative Democrats in the Senate who have joined with Republicans to kill the initiative before, she may succeed.

B – Billions. The governor and lawmakers on the Legislative Finance Committee both submitted budget proposals calling for some $7.3 billion in spending for the 2022 fiscal year. While the overall number looks the same, there’s a big difference in the two proposals: Lawmakers are recommending raises for state employees but the governor isn’t. “We’ve got to be more conservative in some areas than in recent years past and can’t over-promise,” a spokeswoman for the governor said. It’ll be interesting to see whether the two branches meet somewhere in the middle.

C – COVID. We’ve all heard state leaders want everyone to get tested for COVID-19. It turns out legislative staffers and members of the news media will be required to be tested for COVID-19 weekly in order to get into the Capitol. But testing won’t be mandatory for New Mexico’s 112 legislators. Testing, a spokesman for Senate Democrats said, “cannot be required of legislators, but it is being offered to them and they are being strongly encouraged to follow the same testing protocols.” Luckily, the 60-day session will be largely virtual.

D – Democrats. In the Chinese Zodiac, 2021 is the year of the ox. But in New Mexico, it’s the year of the donkey. Democrats control the House and Senate with big majorities and fewer conservatives in their caucus. A Democrat is in control of the Governor’s Office. The trifecta will make it easier for the party to pursue a more progressive agenda, but Republicans warn that going too far to the left could backfire on Democrats in future elections.

E – Early childhood education. The governor and supportive Democratic lawmakers may finally succeed in passing legislation that would let voters decide if they want to draw money from the state Land Grant Permanent Fund to funnel more money into early childhood education programs. House Joint Resolution 1 has made its way through the Legislature at least four times — and died somewhere along the way every single time. This time, it may make the finish line.

F – Food. One perk of attending the session in person has always been the cheap and hearty food offered at two in-house cafes. Savory soups, fresh salads and tasty hamburgers and burritos help make the politics more palatable. But with the session going mostly virtual this year, there likely will be “closed” signs on both cafes — an all-too-familiar reflection of what is happening to eateries around the state these days.

G – Governor. Lujan Grisham will have plenty of support for her many initiatives, with both the House and Senate in solid Democrat hands. But pandemic relief looms as a potential headache and this year’s budget, with so much uncertainty about how big an economic bounce New Mexico will see, will test her ability to placate the progressive wing of her party. Another consideration: Lujan Grisham came very close to joining President-elect Joe Biden’s cabinet. Can she continue to build her record and be a candidate if an opening presents itself later in her term?

H – Health Care. It’s possible some people once saw the state’s Department of Health one of those appendages that generally was out of sight and out of mind. That was then. This is the era of COVID-19, and expect it to get plenty of attention from legislators as they mull the budget.

I – Idea. It wasn’t his. Though he advocated for a proposal to impose a five-bill limit on state representatives to try to make the session run smoother amid the confines of a pandemic, House Speaker Brian Egolf, D-Santa Fe, said the idea came from his caucus, not him. The five-bill limit — derided and already broken by some Republicans — will be informally enforced. We’ll see how informal it gets.

J – January. This month’s name comes from the Roman god, Janus, and it stands for beginnings and endings, with many good tidings expressed. This year’s session begins in January but ends in March — named after the Roman god of war. You can figure out the rest.

K – Keynote. Sometimes the session-opening State of the State address runs way too long. Other times they hit the mark. Either way,  But the long-running tradition,  peppered with plenty of political pomp and circumstance, may be handled differently this year. “It’s likely the governor will issue a remote [State of the State] address, possibly recorded, and it may not be until the session has already begun,” a spokeswoman for Lujan Grisham said last week.

L –  Link. As in chain-link fence, which now encircles the Roundhouse after the FBI warned of plans for “armed protests” at all 50 of the country’s state capitols ahead of President-elect Joe Biden’s inauguration in Washington, D.C., on Wednesday. Concrete barriers and other protective measures have also been put up since the fence went up last week. It’s a sad picture for one of the more picturesque — and open — state houses in the nation.

M – Marijuana. The governor and Democratic lawmakers are expected to push again for legalizing recreational cannabis as a way to diversify the economy and bring in much needed cash — some $600 million in sales, which in turn will generate lots of tax money, proponents say.

In the Senate, newcomer Democrats are Siah Correa Hemphill, Katy Duhigg, Carrie Hamblen, Martin Hickey, Leo Jaramillo, Brenda McKenna and Harold Pope Jr. Two of the four newbies on the Republican side of the aisle aren’t new to the Legislature. David Gallegos and Gregg Schmedes served in the House before becoming senators. But Republicans Crystal Diamond and Joshua Sanchez are brand-new to the Senate.

O – Open Meetings. What with most of the agenda going virtual, some critics — including many Republicans and open government advocates — worry many New Mexicans without broadband access will not be able to access the many hearings and floor discussions. It was a problem during the June special session. Democrats and others say they will do everything they can to increase online access, including stopping debates or discussion on bills if they hear the legislative website has crashed.

P – Politics as usual. The Legislature can be seen as theater, with the members mere players, as Mr. Shakespeare once said. But how legislators behave when the spotlight is on them on the open floor of either chamber may be quite different from their moves on Zoom. It’s possible some of the excess talk, back-patting — and dare we say, grandstanding? — could be lessened online. One can only hope.

Q – Q-tip. Nasal testing for COVID-19 once was described by a health care technician as somewhere between a colonoscopy and a divorce. At least one Republican lawmaker has made it clear the procedure isn’t for her. “I’ll be damned if I’m going to allow somebody to jab a Q-tip up my nose every five days,” said Rep. Candy Spence Ezzell, R-Roswell.

R – Republicans. They are outnumbered, but not out of fight, members in both chambers they say. Expect the GOP to fight efforts to legalize recreational cannabis, pull money from the permanent fund for anything and repeal the abortion law at hand. “The Democrat-controlled Legislature should respect New Mexico by abandoning their desires to increase taxes, increase energy costs, and defund law enforcement,” Rep. James Townsend, R-Artesia and leader of House Republicans, said last week. On the other hand, this is the current state of the GOP: It has just one member of the Senate — one! — from the largest city in the state. His name is Mark Moores.

S – Special session. New Mexico had two in 2020, and expect another in the autumn as lawmakers will be called to come together to reapportion legislative districts based on 2020 census data. New Mexico’s current voting districts were drawn in 2012 by a state District Court after former Republican Gov. Susana Martinez vetoed a plan from the Legislature. Advocates for a better process, including Sens. Jerry Ortiz y Pino, D-Albuquerque and Mark Moores, R-Albuquerque, are hoping a bill to be introduced during the session will base map-drawing on common sense and fairness, not political self-interest.

T – Tug of war. The rocky relationship between Egolf and Townsend could be on full display as Democrats flex their muscle and pursue a more progressive agenda. The House party leaders have vowed to work together better, but given their history of push and pull, it’ll be a real test of strength.

U – Unlawful. Rep. William “Bill” Rehm, R-Albuquerque, has introduced an Unlawful Use of Body Armor bill, which would make it a third- or fourth-degree felony, depending on the crime, for a felon to wear body armor. It’s one of many crime-fighting bills introduced to date by Rehm, a retired sheriff’s deputy.

V – Veto. Sen. Jacob Candelaria, D-Albuquerque, is sponsoring a proposal to bag the so-called pocket veto. “No governor should be able to veto a law passed by the people’s elected representatives without having to explain why,” Candelaria said. “Our Supreme Court recently emphasized how important those explanations are to the balance of power and good law-making.”

W – Weather. There’s already two bills filed to ensure the entire state is filled with weather stations. Whether they pass is hard to forecast.

X – Xerox. Given the session is going virtual, there’s probably going to be some cost savings on copying paper, said Raúl Burciaga, director of the Legislative Council Service. During a regular session, legislative staff members normally hand out reams of print copies of bills, amendments and accompanying documents to lawmakers and people in attendance. There’s almost no need for that this year.

Y – You.  Granted, policy discussions among lawmakers can be drawn out and to some, tedious. But remember, decision-making during the legislative session affects New Mexico residents and taxpayers every day. Visit www.nmlegis.gov and click on the “What’s Happening” link for an updated list of virtual hearings and floor sessions.

Z – Zoom. Usually, that’s the word used as the Legislature compresses 60 days of work into the last six hours of mad bill-passing and deal-making. Now, Zoom is the only thing standing between a session and a seance.