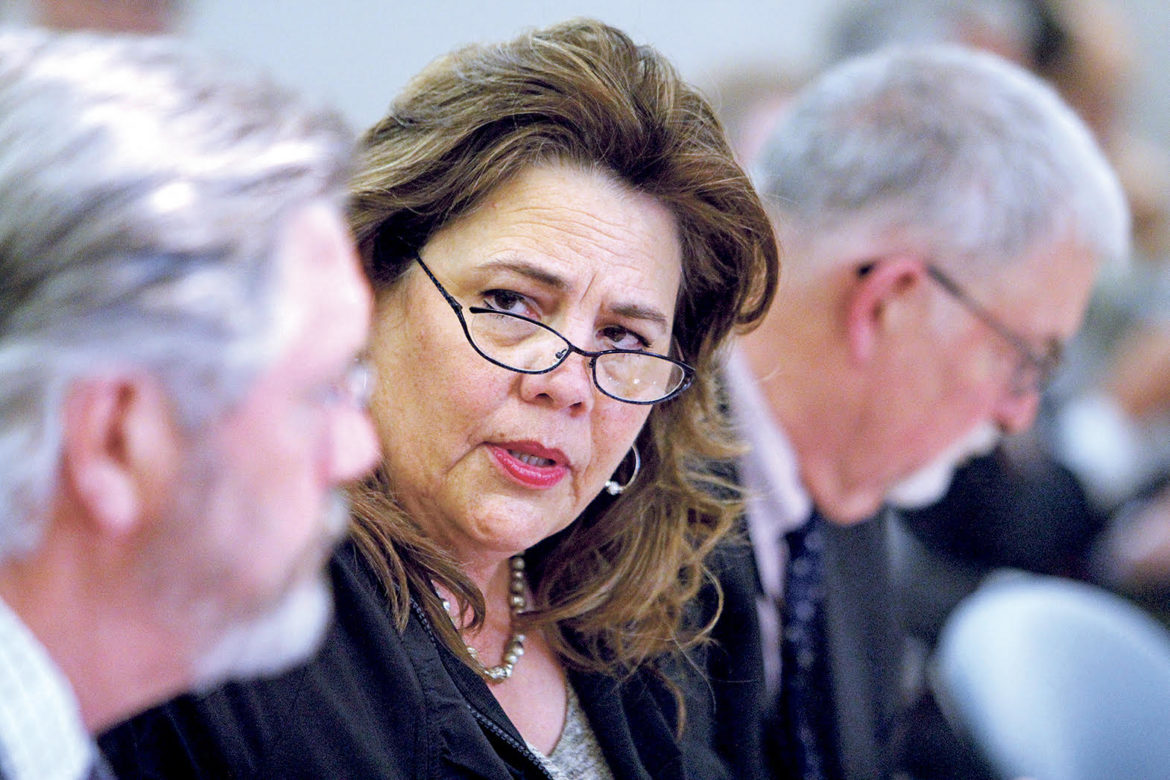 Rep. Patty Lundstrom, D-Gallup, wants to take a closer look at the tax breaks the state allows as the coronavirus pandemic threatens to hammer its budget.

Susan Boe still remembers the surprise she felt when she discovered the door was locked.

Looking through the small window of a legislative hearing room in the state Capitol, she could make out the members of the House Appropriations and Finance Committee within. She had been tipped off that they were talking about the budget, and she wanted to sit in on the meeting, which she assumed was open.

Boe, then the executive director of the New Mexico Foundation for Open Government, was in for a rude awakening.

The meeting was closed, off limits to outsiders.

“It was pretty frustrating,” Boe said earlier this week, recalling that day nearly five years ago when she tried to get a sense on how lawmakers were finalizing the state budget. “We represent the public so I assume that meant it was off limits to them, too.”

“That seems to be the MO over there.”

“I can assure you that the practice that we did is the historical practice in New Mexico state Legislature,” said Smith, who served in the Senate for 32 years before being defeated in a Democratic Party primary last June.

It can work like this, Smith said: As the deadline for coming up with a final budget approaches, influential lawmakers on both the Senate and House finance committees convene “work groups” to hash out final details.

In Smith’s case, that meant calling in a couple members of his committee — an equal number from each political party but not a quorum, he said — to leave a floor session to discuss what needs to be done to balance the budget.

“I would bring in Republican and Democratic budget people and say, ‘How do we work this out?'” he recalled. “That would happen at the 11th hour, right at the very end.”

On the House side, members of the House Appropriations and Finance Committee could convene outside hearing rooms in what chairwoman Patty Lundstrom, D-Gallup, also calls work groups.

Lundstrom said despite media and good-government advocates’ criticisms of legislators doing work outside the public eye, there is nothing secretive or nefarious about the process. Rather, she said, it involves her pulling in some budget experts to learn more about various programs that may be seeking funding. Those people might include members of her committee, a member of the Senate, a member of the Legislative Finance Committee or an advocate for a particular program.

“If I want to call people in and ask them questions about components about the bill, that’s completely OK in my mind,” she said. “Often that happens with any piece of legislation. I am the primary sponsor of House Bill 2 [the budget bill]. If I want other people’s participation, I’m gonna pull them in. I don’t think that’s preventing anyone from knowing what’s going on.”

She said anyone tracking any piece of legislation can follow where it is and what changes are made to it throughout the session.

“If someone is thinking there’s lots of deals being cut behind closed doors, all you have to do is look at what we started with, what we are recommending and what those differences are,” she said.

But Lundstrom’s case falls short for open government advocates. Under the scenario outlined by Lundstrom, they say the budget ship has already sailed.

“Why do they have to meet off line to fix an amendment?” said Melanie Majors, the current executive director of the Foundation for Open Government. “Why can’t they do that in an open hearing?”

Smith counters that time constraints often force legislators’ hands, requiring quick decisions.  Sometimes, he said, other senators have made it clear they did not want to be part of the final decision-making group because those choices, particularly if they involve cuts, can be unpopular with their constituents.

But FOG representatives and some lawmakers say it doesn’t have to be that way, and believe it’s time for a cultural change in the way both chambers do business when it comes to ensuring the-budget making process is transparent.

“People need to see how it works,” said Majors. “The public might have a better understanding of the tough job legislators do if they could see what happens when they put it together.”

In her view, all that is needed is a legislative rule change, one that makes it clear any official discussions about the budget remain open to the public.

“Let’s put into effect new rules that all budget negotiations should be done in public, with 72 hours’ notice, and not take any input until we have everybody there and they can see how hard this is,” she said.

Sen. Mimi Stewart, D-Albuquerque,  said in talking with senators who want to succeed Smith as the influential Senate Finance Committee chairman, they all tell her the same thing regarding the issue.

Stewart said the addition of 11 new senators could drive a culture change. Rep. Christine Trujillo, D-Albuquerque, said the same could be true in the House, where 12 new members join.

Senate Majority Leader Peter Wirth, D-Santa Fe, said he supports Stewart’s efforts to “reset” and look at ways to make the entire process more open to both the public and other members of the Senate.

“There’s been some frustration that some members who are not on that [Senate Finance Committee] do not have a chance to participate, but in all fairness, that’s the same for the other committees, like Senate Education [Committee],” Wirth said.

And, he said, it’s easy to overlook “how much of the budget process is open.”

Trujillo said the public is clamoring for more transparency in the budget process.

“We have pushed so much that there is a lot more sunlight,” she said. “People are more enlightened now, people want to know where their tax dollars are going. It would be great if a lot of decisions would be made much more openly.”

Majors said her organization polled the nearly 200 candidates for both the state House and Senate chambers about a range of issues surrounding transparency and open records. Of the 94 who responded, more than 85 percent said they supported efforts to make the budget process more transparent.

House Minority Leader Jim Townsend  said he believes all work groups and subcommittees should be held in the open from now on.

“I don’t think there should be a committee or subcommittee hearing held in the Legislature that isn’t open to the public,” he said. “It should be announced and easily accessible — and recorded in the archives for the future.”

Even if lawmakers decide at the spur of the moment during a floor or committee hearing  that they have to break off into one of those groups to work on an issue, they should announce their intent and allow anyone who is present to join them, he said.

“I think we have spent a lot of time forming an ethics committee to increase our rules around transparency,” he said. “We just need to follow the spirit of that effort.”