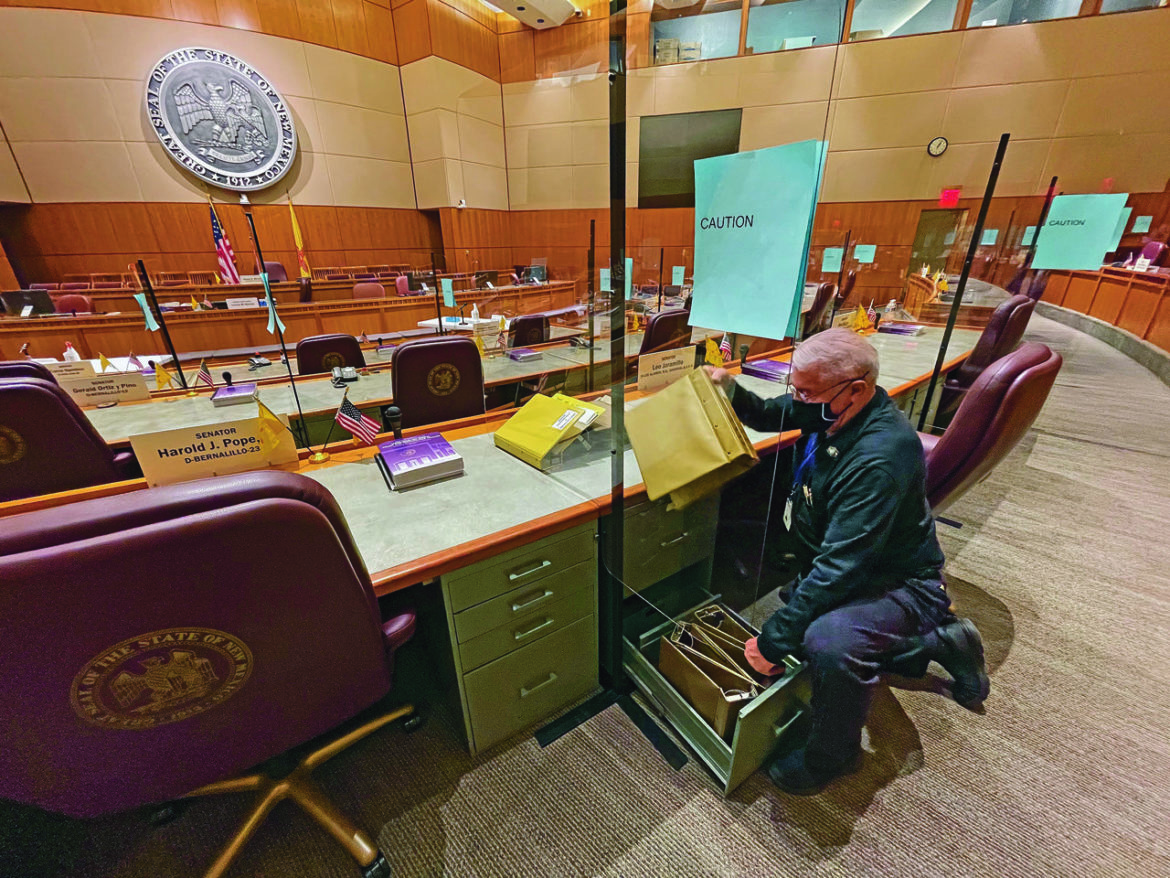 The 2021 legislative session begins Tuesday at noon, against a bizarre backdrop that’s never been contemplated, much less seen.

The Capitol building remains surrounded by fencing, concrete barriers and blocked roads. On Monday, it was guarded by state police officers and at least a dozen National Guard soldiers, who were seen patrolling the facility and manning entrance checkpoints.

The annual State of the State speech, which usually highlights the opening day of the session, is off, at least on Tuesday. A spokeswoman for Gov. Michelle Lujan Grisham said it eventually will be delivered, “likely remotely,” due to ongoing concerns about the COVID-19 pandemic.

And late Monday, it remained unclear whether the Roundhouse will remain closed to everyone — including lawmakers — later in the week after Tuesday’s 60-day session commences with housekeeping matters that must be completed in order to go forward for the next two months.

Raúl Burciaga, director of the Legislative Council Service, which oversees the operation of the Capitol, said: “We do not yet know if the building will be closed or open Wednesday.”

But for at least one day, the Roundhouse will offer a glimpse of normalcy, hosting lawmakers and a few others as the session is gaveled to order Tuesday. Heading the agenda both for Republicans and Democrats are economic relief bills for New Mexicans hit hardest by the COVID-19 pandemic, which detonated the state’s economy for several months in 2020 and altered the best-laid plans of nearly every individual in the state.

Signs of the uncertainty COVID continues to bring were apparent at the Capitol, as legislative leaders work to figure out how to run the session.

Senate Majority Leader Peter Wirth, D-Santa Fe , has laid out a schedule that would allow members of his chamber to work remotely through the end of the month. He said he expects senators to introduce at least 100 bills on Tuesday. Lawmakers can then work on them in virtual committee hearings over the course of the next several weeks before being called back to the Senate floor to debate them and conduct votes as the session progresses.

He said the 42-member Senate will also vote Tuesday on whether to appoint Sen. Mimi Stewart, D-Albuquerque, as Senate president pro tempore, a top leadership position. Stewart has served in the Legislature since the mid-1990s, initially in the House of Representatives.

If, as expected, Stewart is elected to the post, she could in turn appoint a new chair for the powerful Senate Finance Committee, which longtime former senator John Arthur Smith of Deming led for years. Smith was defeated in his re-election bid in last June’s primary election.

Meanwhile, in the House, lawmakers are expected to vote on approving the rules of how to conduct this year’s session for their chamber. Speaker Brian Egolf, D-Santa Fe, has repeatedly said this session will be a “hybrid” of virtual and in-person events. As with the Senate, the House plans to run committee hearings remotely and take to the floor at specific dates to debate bills.

A spokesman for Egolf said the rules would get most of the focus on Tuesday.

One goal both chambers have is to approve what is known as the “feed bill,” which provides money to run the session. Lawmakers generally prioritize the legislation early in each session so it can make its way to the Governor’s Office for approval.

Egolf told lawmakers during a virtual Legislative Council meeting Monday “a substantial appropriation” of funding for Capitol security personnel will be included in that piece of legislation, House Bill 1.

During the meeting, Rep. Rod Montoya, R-Farmington, took issue with some facets of the security push.

“The grounds here belong to the Legislature, not to the administration,” he said, noting the governor’s office complex is a tenant on the fourth floor of the Capitol. “The administration is a guest in this building. Anything that happens here [the Capitol], the Legislative Council should weigh in on it.”

Egolf said the council had in fact verbally instructed Burciaga to secure the building at a meeting several weeks ago. The protective measures, he said, were put up by the Legislature, not the governor.

When Montoya asked if the committee could vote to formally approve the security measures with a vote during Monday’s meeting, Egolf said that would be “a risky precedent to set, to take the position that the director of [Legislative] Council Services can’t make quick decisions for the protection of life and property. We don’t want to be in that position.

“Nobody wants to be here [in this situation],” Egolf said. “We are here because a group of people are engaged in riotous activity. Engaged in — according to the Justice Department and the FBI — seditious insurrection … of the (U.S.) Capitol.”