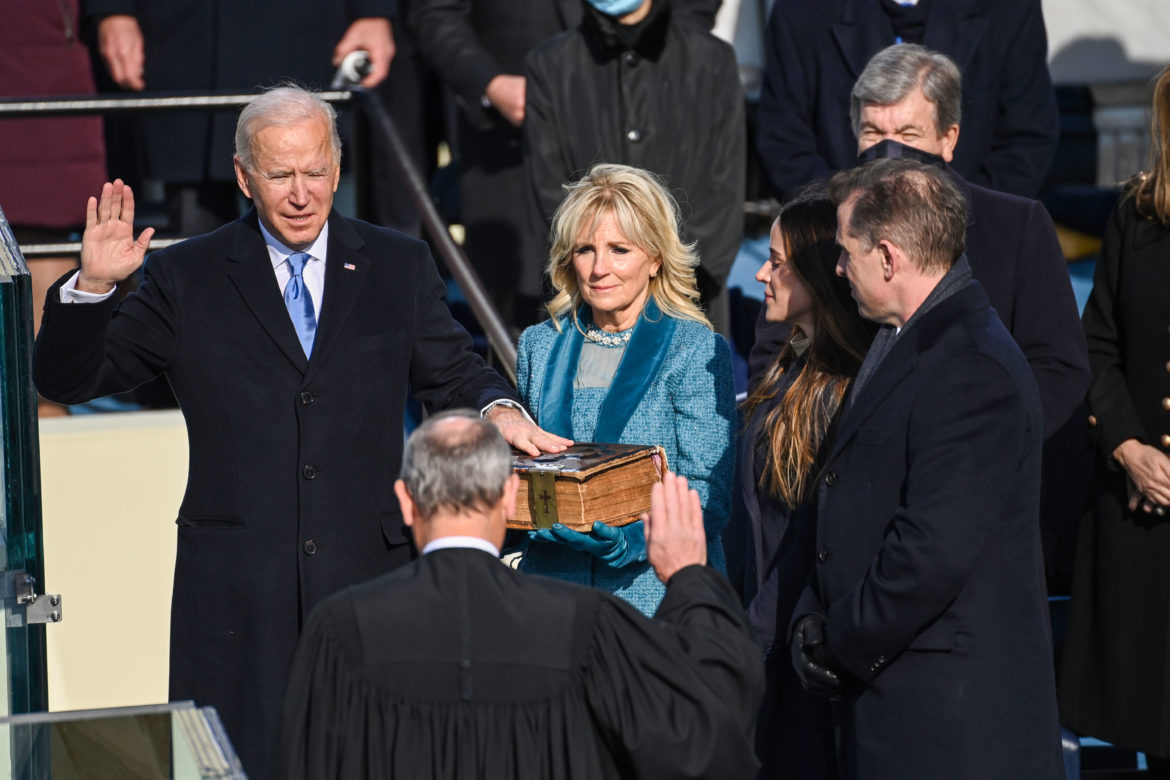 WASHINGTON, DC - JANUARY 20: US President-elect Joe Biden is sworn in as his wife Jill Biden holds the Bible during the 59th Presidential Inauguration at the U.S. Capitol on January 20, 2021 in Washington, DC.

It was a more subdued and smaller inauguration ceremony than those of years past, because of COVID-19 protocols. And law enforcement and members of the National Guard surrounded the inauguration over possible threats from the far-right, which did not materialize.

It’s under this banner, along with facing an increasingly bleak pandemic, economic problems and a myriad of other challenges, that Biden will take the reins of the country.

Biden said it would take unity to overcome challenges like the COVID-19 pandemic, lost jobs and “a cry for racial justice some 400 years in the making.”

“To overcome these challenges – to restore the soul and to secure the future of America – requires more than words,” he said.

One notable absence was Donald Trump, who opted against tradition and did not attend the inauguration of his successor. Trump lost to Biden in a bruising campaign and refused to admit he had lost, advancing baseless conspiracy theories about election irregularities.

Driven by these conspiracy theories, pro-Trump protesters stormed the U.S. Capitol on Jan. 6, seeking to stop Congress from counting the electoral votes that proved Biden won the 2020 election.

It was this action that caused the massive security infrastructure around the inauguration and throughout much of Washington D.C.

“And here we stand, just days after a riotous mob thought they could use violence to silence the will of the people, to stop the work of our democracy, and to drive us from this sacred ground,” he said. “That did not happen. It will never happen. Not today. Not tomorrow. Not ever.”

Gov. Michelle Lujan Grisham did not attend the ceremony and cited COVID-19 precautions for not leaving the state.

“Better days are ahead for all of us. I congratulate President Biden and Vice President Harris, and I am praying for them and their families,” Lujan Grisham said in a statement. “Their success is now our success, our nation’s success.”

U.S. Sen. Martin Heinrich said, “we turn the page on a dark chapter in our nation’s history and, with renewed hope, begin taking bold actions to help rebuild our communities.”

He said that he was confident that Biden “is the leader we need to take big, bold action and renew the promise of the American dream.”

“Today, the American people, and millions of viewers around the world, watched the historic inauguration of President Joe Biden and Vice President Kamala Harris,” Luján said. “The peaceful transition of power is a time honored tradition in our democracy, and once again America demonstrated to the world that governance by the people will always prevail. President Biden’s message of healing and unity shows that our country is ready for a new direction, one that will allow us to build back better.”