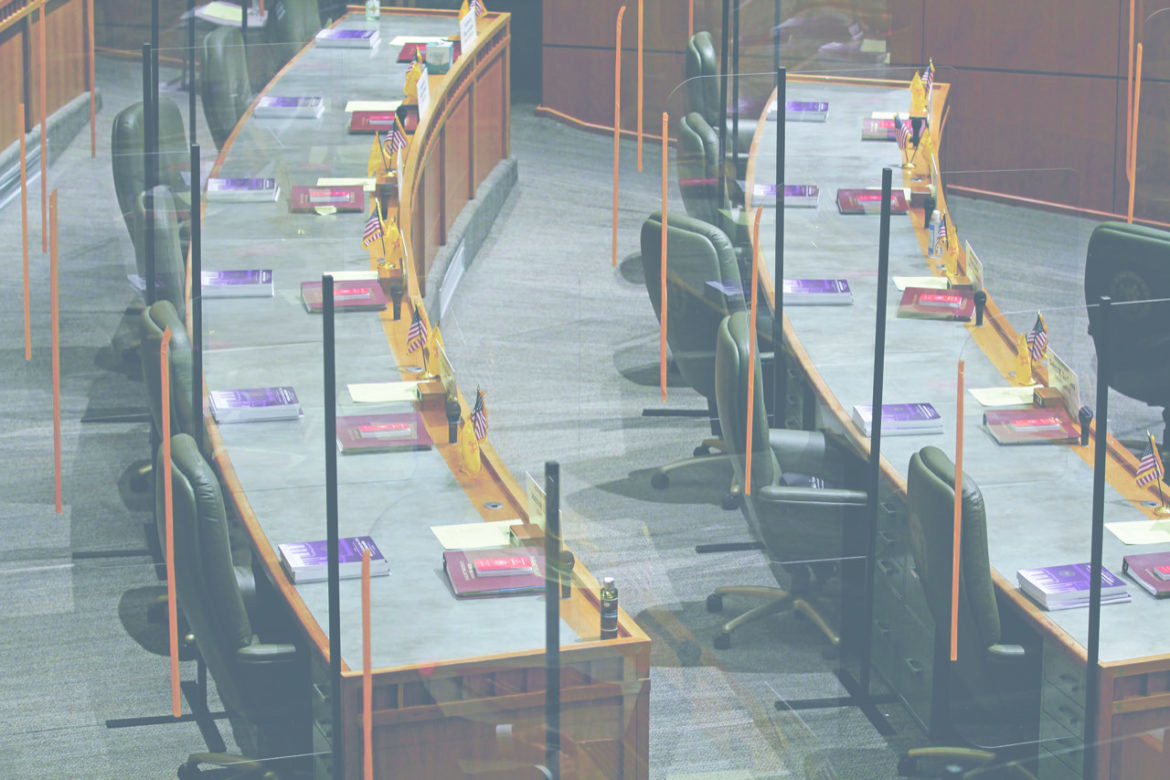 After all the concerns about a potential demonstration (or worse) interrupting the proceedings, the 2021 session of the New Mexico Legislature began quietly and peacefully Tuesday.

At times, it didn’t seem like a session at all. Certainly not an opening like veterans have come to know.

Yes, legislators trooped into the Capitol, but there were few others. No lobbyists. No family members. No glad-handers. And none of the eye-grabbing sideshows that decorate the Rotunda on Day One.

Also missing was Gov. Michelle Lujan Grisham,  who postponed the annual State of the State address that normally punctuates the beginning of the session.

The halls remained mostly empty, only briefly populated by security guards or legislative staffers moving about.

House Speaker Brian Egolf called it “the most unusual opening day in the history of our New Mexico Legislature.”

And that may be the theme for the next 59 days, as both the House of Representatives and Senate plan to run business as remotely as possible amid health fears brought by the COVID-19 pandemic and security concerns raised after a stunning attack on the U.S. Capitol on Jan. 6.

And yet, in at least one way, the pandemic provided a punch of expediency to the proceedings as members of both chambers managed to introduce dozens of bills for consideration — an action that rarely happens to such an extent on the opening day of a 60-day session. Both chambers moved quickly to approve House Bill 1, known as the “feed bill,” which provides funding for the actual operation of the legislative session.

With the devastating attack on the Capitol still fresh in the minds of many, state police officers and National Guard troops remain on the scene at the Roundhouse. Their presence — and the cost of upping protection for the facility — vastly altered the financial weight of the feed bill, with more than $2 million of its roughly $32 million budget going toward security.

Nearly $1.5 million of those funds are an executive appropriation to the state Department of Public Safety for “personnel, equipment and other expenses necessary for the security of the state capitol,” according to the bill.

Another $674,000 goes to the state Department of Military Affairs for National Guard troops.

Members of the House Appropriations and Finance Committee, which unanimously approved the bill before it made its way through the House and Senate, urged caution in discussing the specifics of that protection.

“Be real careful about how much in the weeds we get about that,” said Rep. Patty Lundstrom,  D-Gallup and chairwoman of the committee, after another member asked how long those forces will be stationed at the Capitol.

She said it could be a “security breach” to say more about the issue.

If the first day of the session was unlike any other, the second day will be, too.

Legislative leaders announced the Capitol will be closed to everyone Wednesday amid continued concerns about potential violence on Inauguration Day in Washington, D.C. None of the more than a dozen House committees plan to meet on Wednesday. Those meetings will start, via Zoom, on Thursday. The House will reconvene on the floor Monday, said Egolf,  D-Santa Fe.

“Committees will meet remotely next week,” he wrote in a text message.

Egolf, reelected as house speaker Tuesday, said during some brief opening remarks that legislators “will not be deterred from doing the important work ahead of us.”

He said the state is moving into a new chapter of its history as it battles the continuing pandemic and the financial, emotional and physical toll of the past year.

“Whether the next chapter of the story is one of triumph or tragedy” is in the hands of the legislative body, he said.

Both Democrats and Republicans in the House have said they will push for pandemic-relief legislation to help New Mexicans most harmed by the COVID-19 crisis. Lawmakers can introduce bills up to the midway mark of the session.

Some lawmakers in the Capitol Tuesday worked from their offices there, taking part in the proceedings online. Few were seen moving about the hallway.

One who briefly left the chamber to dash from one room to another was Sen. Bill O’Neill,  D-Albuquerque.

Noting the strong security presence in the building, he flashed a smile from behind his protective mask and said, “I’ve never felt safer.”