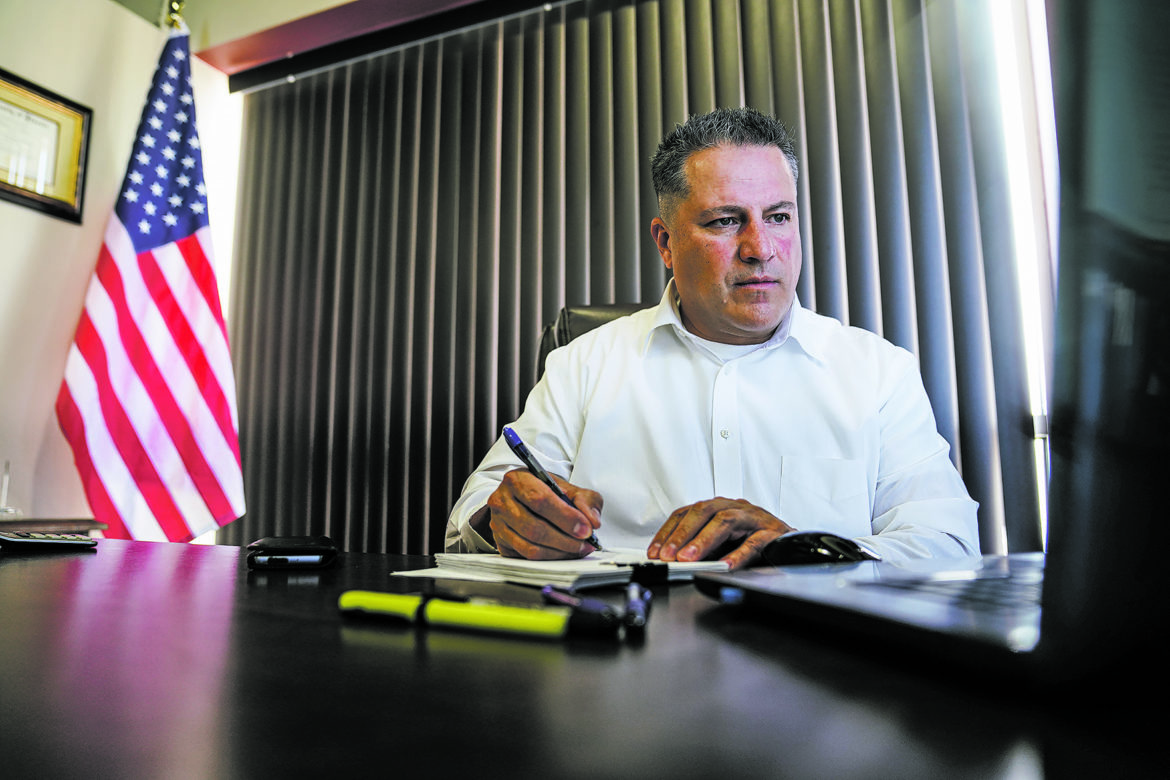 Sen. Greg Baca works on a client case file as his law office in Los Lunas on Firday afternoon. Baca, a former Navy veteran, is the new Senate minority leader.

The ocean. Greg Baca had never seen anything like it.

A product of desert terrain — he was born in Belen in 1971 — Baca looked out over the watery expanse of the Atlantic from the deck of the USS Nimitz and saw a whole new world around him.

“It was just bigger and more beautiful than I could have imagined,” recalled the onetime machinist’s mate. “It was one of the most amazing sights I have ever seen, and I’ve seen water all over the world, from deep gray to bright blue.”

And yet in the six years he served in the U.S. Navy, New Mexico never strayed far from Baca’s heart. One of his Navy buddies, Dave Clark, now a chiropractor in the Chicago area, recalled Baca speaking about New Mexico all the time.

“He talked about going home,” Clark said. “New Mexico was on his mind all the time.”

The anchor of Belen led Baca back home and eventually into politics, where he is the Republican Party’s new point man in the state Senate. It’s not a cushy role: the GOP is outnumbered 27-15 and faces a difficult ideological battle against a Democratic Party that has more liberal members than it did a year ago.

But at age 49, with a family story that encompasses a Democrat-to-Republican transition in ideology, Baca said he is looking forward to the challenge — particularly in a year when Republicans will try to hold the line on legislation that includes abortion and the legalization of recreational marijuana.

“We have policy positions and solutions that we would love to offer and many times those are pushed aside simply because of party affiliation,” he said. “But we are put in the positions we are in to make the best of it and to produce results for the people — and that’s what I’m gonna do.”

The main objective for his party, he said, is to reopen New Mexico’s businesses, many of them financially damaged by the COVID-19 pandemic.

“Reopening the state is paramount,” he said. “That’s at the top of the list for me. Right now I feel as if our economy in this state is being propped up to a large extent by federal money, CARES Act money, stimulus funds. We have to wean ourselves back off of that and onto our normal traditional operation of sources — oil and gas, business, hospitality — to where we are standing on our feet again.”

Toward that end, he said Republicans will work on a number of economic stimulus bills. It’s an issue that will almost certainly put them in alignment with Democrats, though to what degree remains a question.

Crime prevention legislation also will be high on the agenda, Baca said.

“We have got to address our crime problem,” Baca said. “And it works hand and hand with economic recovery and building. Businesses strategically set us aside because of our crime rate. Our crime rate is so high it’s difficult to conduct business here.”

That issue hits close to home with Baca. Over the holidays, a car wash he owns in Los Lunas was vandalized and robbed.

When Baca returned home from the Navy in 1995, he got interested in business. For a time, he bought rental properties to bring in income. Later, he and his wife, Cynthia, ran a gift shop in Albuquerque. With her encouragement, he attended law school at the University of New Mexico, and now has a private practice that specializes in real estate, probate and bankruptcy cases.

A believer in small government, Baca said he has introduced a bill that would amend the state’s emergency powers act and limit any such actions to just 14 days. After that, any extension of those emergency powers would have to be approved by the Legislature, if it is in session, or by legislative leaders from both chambers.

“I don’t care if you are Republican, Democrat, otherwise,” he said, “That’s too much power in the hands of one person.”

He said “the current lockdown health orders” prompted him to introduce the bill.

While Republican Party values — fiscal conservatism, pro-life and pro-gun rights — run deep within Baca, he said his parents were lifelong Democrats. That is, up to the 444-day long Iran hostage crisis of 1979-81.

His father, Roosevelt E. Baca, was named after President Franklin D. Roosevelt, a Democrat who led the nation through the Great Depression and most of World War II. But as television stations counted off the many days of the seemingly never-ending hostage crisis, Baca’s parents became more and more supportive of presidential candidate Ronald Reagan, a Republican who took office in 1981.

Roosevelt Baca was a trucker and, later, a pastor at the Christian Faith Chapel cq in Belen, which he founded in the mid-1990s. His son recalls spending a lot of time, both in the truck and in the church, with his dad.

“He used to say, ‘When you are doing your job, work like you are working in service of God,’ ” Baca said.

“He was not a fiery orator,” Baca said of his dad’s pulpit approach. “He was very understated. Thoughtful.”

“He doesn’t get up there to hear himself talk like we see a lot of legislators do,” Brandt added. “And he is forceful when he speaks. His arguments are easy for anyone to understand — he lays out his argument in a way the layman can understand.”

In a move that surprised some, Senate Republicans elected Baca to head their caucus late last year over longtime minority Senate leader Stuart Ingle, R-Portales, who has served in the Senate since the mid-1980s and held the position of minority leader for decades.

“I think he will be a great leader focus going forward,” Brandt said of Baca. “More of a no-nonsense sort of leader. I think you will see more of an opposition party than you have in the past.”

But Baca said he won’t rely on antagonism.

“Honey before vinegar all the time,” he said with a laugh. “The positions we support we will support more vigorously, defend and debate those positions more than we have in the past.”

In doing so, Baca said he’ll debate those points with a mask on— something he didn’t do during a special session of the Legislature in June and a move for which he was harshly criticized.

He said he got a COVID-19 test that came back negative just before that session, so he felt safe. He wore a mask at a second special session late last year.

Now, he said, “I do it out of respect to my colleagues who feel uncomfortable when I’m not wearing a mask. When I go into a business, I’m showing respect for their business so I don’t put them in a position where they might get a penalty for me not being masked.

Running the minority party in the Senate will not be the first time Baca will have faced challenges. In 2003, he entered a guilty plea to a DWI charge. He said he has been open about the issue since.

“I’m certainly not proud of that, but I am a story of success in that I did not have another [similar] occurrence of that since,” he said. “That, too, has helped shape me from that point forward.”

Baca and his wife have been married 16 years. They have three children, one who is being home schooled during the pandemic.

He said he believes the current divide in the country — spiritual, moral or political — can be healed with the help of political leaders who communicate with their constituents about what they stand for and what they intend to do in office to effect change.

It’s that kind of direct approach that people noticed years ago when Baca served on one of the nation’s biggest warships.

Even then, Clark said, Baca was a quiet, straight-shooting guy who embodied a sense of quiet leadership.

“I saw a leader in him then, yeah,” Clark said.

Baca, who represents an area of the state that at one time was a Democratic Party stronghold but now boasts a strong Republican presence, said he won’t shy away from what his past has taught him. He said he is determined to let his faith help guide his decision-making.

“The teachings that I learned from the Bible from watching my dad on the pulpit become more and more true as I become an adult,” Baca said. “And I’ve learned the closer you can link your life and values to those truths, it not only betters yourself but all of those around you — the community and society around you.”