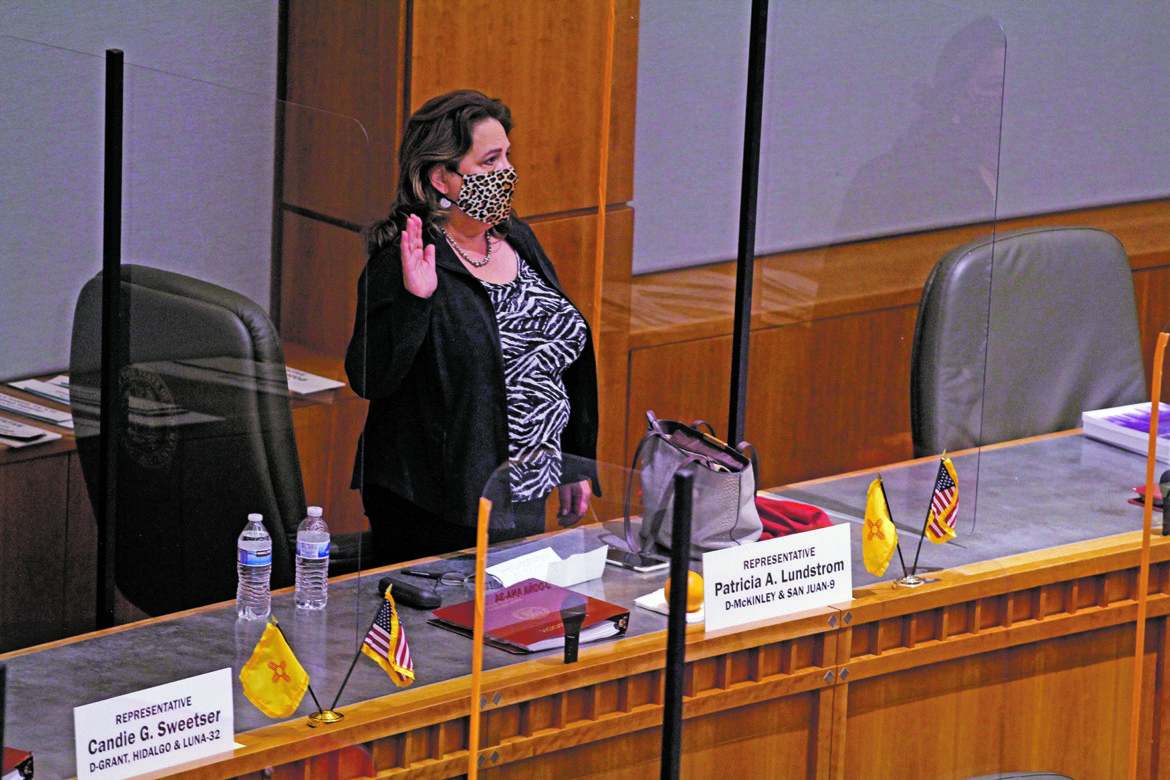 Patricia A Lundstrum, D-Gallup, takes her oath of office on the house floor during the first day of the legislative session on Tuesday, January 19, 2021.

At 16, state Rep. Patty Lundstrom started her own business.

“We were broke at the end of it,” the Gallup Democrat, now 60, recalled in a recent interview. “We had to close up shop two weeks early.”

But the experience — operating a concession stand at the government-owned swimming pool in the village of Milan, where she grew up — proved valuable for the ambitious self-starter. Looking back, she said it offered lessons that helped shape her.

“It’s a lot of hard work to take on that kind of responsibility,” Lundstrom said.

Long removed from selling chili dogs and chips to sopping-wet customers, Lundstrom is now one of the most powerful people in New Mexico. As chairwoman of the Legislature’s House Appropriations and Finance Committee and vice chairwoman of the Legislative Finance Committee, the veteran lawmaker has become one of the go-to experts on the state’s multibillion-dollar budget.

Her influence, observers say, is even more pronounced with the exit of John Arthur Smith, the 32-year lawmaker who served as chairman of the powerful Senate Finance Committee for more than a decade before his ouster in last year’s primary election.

Born in Deadwood, S.D., Lundstrom moved to New Mexico around the age of 3 or 4 when her late father, a uranium miner and U.S. Army veteran, was transferred to what is known as Ambrosia Lake, a uranium mining district north of Grants. Her mother worked in a doctor’s office doing bookkeeping, she said.

“We were very much what I call kind of a blue-collar, middle-class family,” she said. “Uranium miners’ salaries are very good — it’s industry based — so we were very fortunate.”

“You know, very pragmatic, very much salt of the earth,” she said. “We go to work every day. We pay our taxes. We raise our kids. We want good schools, that kind of thing.”

The daughter of an Anglo father and a Hispanic mother, Lundstrom began her education in Catholic school in the small town near Grants. The oldest of three children, she recalls “the nuns telling me how to stay in the lines when we were coloring.”

Lundstrom, who later attended public school, said she wasn’t the smartest kid in class but academics were “pretty easy” for her.

“I made the grades that I deserved,” she said. “I could have been a straight-A student. I was more like an A-minus, B-plus student.”

After graduating from Grants High School in 1977, Lundstrom attended New Mexico State University, first at the branch in Grants before transferring to the main campus in Las Cruces a year later.

John Howie, now a Texas oil executive, met Lundstrom in college. He said his first impression was that she was intelligent and candid.

“I was always impressed that Patty was smart, and she would tell you what was on her mind,” he said. “She was direct.”

Those traits, Howie said, served Lundstrom well as she got into politics.

“She’s thoughtful. She’s prudent. She is empathetic and she’s rational,” he said. “I’ve seen her, you know, admit mistakes, but she also puts her cards on the table.”

Lundstrom earned undergraduate degrees in government and political science and a master’s in public administration from NMSU.

“My master’s degree in public administration is all about public finance and public budgeting,” she said.

After graduating from New Mexico State in 1984, Lundstrom took a few months off because, she said, she was “fried.” In January 1985, she started working for the Northwest New Mexico Council of Governments as a planner with a focus on transportation. She quickly moved up the career ladder.

“Ten months later, I became the executive director,” said Lundstrom, who retired in 2010 after a 25-year career with the council, a quasi-governmental regional planning agency for the state.

Evan Williams, the current executive director, said Lundstrom was his supervisor when he moved to New Mexico in 2002. He recalls he had “zero background in planning” but learned from Lundstrom that quick thinking was almost as important as experience.

“Out here in northwest New Mexico, you just kind of get thrown in the deep end,” he said. “That’s one of Patty’s favorite things to say. Our region has a lot of needs and so you just figure out how to talk to people and figure out what they need and how to get those needs filled.”

Williams described his former boss as “driven” and “willing to go to the wall for our communities.”

“From my perspective of working for her, I have a hard time working for people who aren’t willing to get in the trenches, to tell me what I have to do but not be willing to do it themselves, and that’s the complete opposite of who she is,” he said. “She’s the first one to show up, the last one to leave.”

Lundstrom’s first foray into politics came in 1998 when she ran for New Mexico’s 3rd Congressional District.

“I did that because I was upset with the person that we had at the time,” she said, referring to Republican Bill Redmond, who was elected to finish Bill Richardson’s term in the U.S. House when Richardson resigned to become U.S. ambassador to the United Nations.

“When he came into Gallup, we had him at a chamber of commerce event. The more he was talking, the more I kept thinking, ‘This man isn’t even talking about Gallup. He’s talking about Las Cruces, or he’s talking about another community because he didn’t have any of his facts correct.’ … There was something in me that just exploded inside … and I thought, ‘I cannot rely on this individual to help this community grow if he doesn’t even know what the community is.’ So that’s when I went home and told my husband, ‘I’m going to run for Congress.’ ”

Lundstrom took a 10-month leave of absence without pay from her job at the Northwest New Mexico Council of Governments to campaign. Though she finished sixth in an eight-way race in the Democratic primary, Lundstrom said the experience — much like operating a concession stand — provided a valuable lesson.

“I learned a lot about politics at that time,” she said. “It’s like [former U.S. House Speaker] Tip O’Neill says, ‘You don’t understand politics until you lose.’ I got a real good understanding.”

When a seat in the state House of Representatives opened in 2000, Lundstrom ran and won. She’s been in the Legislature since, becoming chairwoman of the influential House Appropriations and Finance Committee in 2017.

Egolf said Lundstrom invests a great deal of time in being prepared — from reading every report and annotating spreadsheets to meeting with Cabinet secretaries and government staffers throughout the year.

“Her work ethic is phenomenal,” he said.

“The best way I can describe her is pretty much all business,” she said. “If you call her up about something …. she’s not one of those who will tap dance around an issue. She puts it out there, and she just tells you.”

It’s not just Democrats who have positive things to say about Lundstrom.

“The one thing I’ve always enjoyed about Patty is you can go sit down and talk to her about issues straight up, and she can talk about the differences without taking it personal,” said House Minority Leader Jim Townsend, R-Artesia. “That, in the legislative process, sometimes is so few and far between.”

Lundstrom, who is married to retired chiropractor Ron Berg and has eight stepchildren “and a whole bunch of little grandkids,” also describes herself as “incredibly fair,” “very pragmatic,” “tenacious” and “very commonsense.”

Pieces of legislation that Lundstrom said she is most proud of include the 2007 regulation of payday loans and a tax bill allowing the city of Gallup to set aside a portion of its gross receipts tax to pay its share of the Navajo-Gallup Water Supply Project, which includes 280 miles of pipeline and two water treatment plants.

The Gallup area may have an inordinate amount of influence at the Roundhouse this year.

Another Gallup Democrat, Sen. George Muñoz, will wield considerable power as Smith’s successor as chairman of the Senate Finance Committee. During the 2021 legislative session, which started Tuesday, lawmakers will consider a spending plan of more than $7.3 billion for the upcoming fiscal year that will include money for everything from pandemic relief to capital outlay projects.

Lundstrom said her primary goal for the 60-day session is to deliver a “fair, balanced, responsible budget.”

“What I really want to make sure is that we’ve got a budget that serves the people of New Mexico, that we’re not underfunding things, or we’re not putting money into places where we don’t see some return,” she said. “I’m real interested in making sure that our services are provided because people pay for this stuff, you know? They’re paying for that and expect it to happen, and it’s our responsibility to make sure it does.”

As for her own political future, Lundstrom doesn’t rule out the possibility of running for higher office.

“I haven’t put a heck of a lot of thought into that, but I’m not going to deny the fact I’ve been asked to look at other positions, higher positions,” she said. “I feel like I’m not finished with the job I’m doing now as appropriations chairman. I feel like I’m still contributing and still helping to build a strong foundation, a strong financial foundation, so I’m not ready to move up yet. But that doesn’t mean I would in any way rule that out.”

When she was a 16-year-old running a concession stand in Milan, she said her only employee was her youngest brother, five years her junior.

“I could never figure out why we never made any money and then I realized it was because he was giving all the food away for free,” she said.

“I’d be back in the kitchen part … so I would make him be out in front greeting the customers and taking the money. But when his buddies would come out there to swim, he’d end up giving them the food for free,” she said, laughing. “At the end of the day, we had no money in the till.”

Now, as a state lawmaker who is partly responsible for billions of dollars in taxpayer money, Lundstrom wades through business much more cautiously.