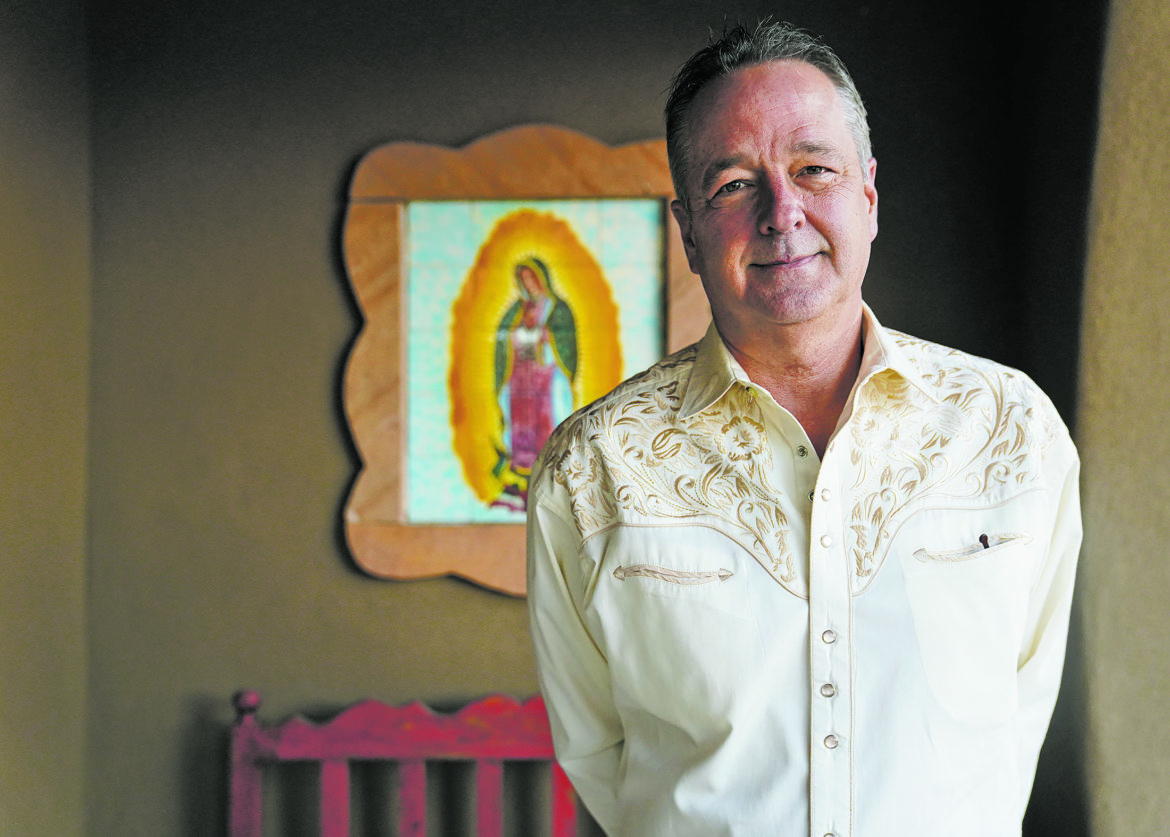 Scott Scanland, owner and lobbyist for New Mexico Govermnet Affairs, has been working from home since the start of the legislature.

But now, Duran is learning to adapt to a virtual environment amid a pandemic that prompted state officials to move most lawmaking over to the internet and keep the building closed to the public and others, including lobbyists like Duran who are a mainstay when the Legislature meets in Santa Fe.

“As a lobbyist who is used to being in that building, sometimes 18 hours a day, the first thing that I am doing is accepting that this is a virtual legislative session, as hard as it is to accept,” said Duran, who has been a lobbyist in New Mexico for some 35 years.

Duran and other registered lobbyists said this year’s legislative session, which began last week with masked lawmakers separated by Plexiglas partitions between their desks, is a big adjustment for people in an industry whose bread and butter is face-to-face interaction.

No more handshakes. No more politicking in legislators’ offices or in between committee meetings in the crowded hallways of the Roundhouse. And definitely no more dinners and drinks at the Bull Ring steakhouse or the Pink Adobe.

The old way of doing business has been replaced by phone calls, text messages, social media and meetings over Zoom.

“There’s nothing like face-to-face communication, face-to-face discussion — reading one’s body language, looking someone in the eye — nothing beats that, nothing,” Duran said. “Do I still think that I can be very effective? I think yes.”

A fixture and powerful force during any legislative session of the past, lobbyists outnumber lawmakers 5 to 1.

How a Legislature composed of unpaid, part-time lawmakers will function without full-time professional lobbyists in the building is a punchline in New Mexico politics.

“I don’t see how you can have a legislative session without the people who run the place,” political blogger Joe Monahan wrote last week.

The question of how much influence lobbyists and their deep-pocketed clients have on decision-making in the state is perennial, New Mexico Ethics Watch wrote in a report last year.

“Some say lobbyists are necessary to the political process, providing information, expertise, resources, even food, that the system does not provide to its legislators, at least not in New Mexico,” the report states. “Others say that some lobbyists in New Mexico are even more powerful than legislators — and their activities need to be controlled.”

According to the Secretary of State’s Office, New Mexico has 516 registered lobbyists, of which an estimated 75 are full-time paid professionals.

“I’m not sure if any one of the [516 registered lobbyists] really got their arms around exactly how to lobby in a virtual session,” said another longtime lobbyist, Scott Scanland. “Obviously, text messaging and emails and things like that. But, you know, on the legislator side, I don’t think they’re looking forward to having their cellphones blow up every 10 seconds with 50 text messages.”

Scanland, who is married to state Rep. Doreen Gallegos, the House majority whip, said lobbyists will have to be mindful of lawmakers.

“It’s just like salespeople or telemarketers,” he said. “After a couple of them, you stop answering the phone.”

Scanland used the word “weird” several times to describe this year’s session, including the absence of lobbyists at the Capitol, which is open only to lawmakers, legislative staffers, law enforcement, custodial employees and news media.

In previous sessions, “we’d just be around, the Johnny on the spot stuff, you know, just listening for the metote, listening to what bills are going to come down the pipe and what we should expect and who’s mad at who and all those sorts of things,” Scanland said. “I mean, we’d be in the middle of it right now and just nothing.”

Though a mostly virtual session will prove challenging, lobbyists said the change is necessary since New Mexico and the globe is still grappling with a highly contagious and potentially deadly virus.

“I’m approaching the session just like I have been the entire pandemic: very safe, following the governor’s protocol,” said Katherine Crociata, a lobbyist for Dell Communications and AT&T. “The legislators worked hard to ensure that we could move forward with a session, and I think it’s important that we all adhere to the public health orders and keep everyone safe.”

Crociata said she’s accustomed to being in the Capitol before the start of committee meetings and until 1 or 2 in the morning as lawmaking intensifies toward the end of the session.

“I’ve always been of the mindset that the most effective way to get something done is to just be in the building and be there and be able to talk to legislators in between committee meetings or maybe pull one out during a committee meeting and have a sidebar conversation,” she said.

Eric Lujan, who first started lobbying in his 20s as a director of federal funding for San Felipe Pueblo and then when he worked for the Santa Fe County Treasurer’s Office as a lobbyist for the New Mexico Association of Counties Treasurers’ Affiliate, said he rented an estimated 600-square-foot office space and turned it into what he calls a “war room” with multiple monitors to keep track of committee hearings.

“I’m not big on taking [lawmakers] out to lunch or taking them out to dinner, stuff like that, but actually having that one-on-one interaction with them,” said Lujan, now an independent lobbyist.

Lujan, whose sister is newly elected state Rep. Tara Lujan, D-Santa Fe, called lobbying during a virtual session “awkward” and “not as simple as people think it is.”

Like other lobbyists, J.D. Bullington said he plans to work “100 percent virtually” with no in-person meetings with lawmakers.

“It’s very different and completely uncharted water,” he said. “Successful lobbyists … utilize face-to-face meetings over lunch, over dinner or some other venue in order to have 100 percent of their attention while we’re discussing matters. That’s all gone now.”

Bullington, a so-called “super lobbyist” who represents 20 clients, said communication, now limited to text and email messages, phone conversations and physically mailing materials to lawmakers’ homes where many of them are working, is critical in his line of business.

“Lobbyists are hired professional advocates who serve as front-line spokespeople for clients who need critical information communicated to lawmakers before they make decisions on legislation,” he said. “There are unprecedented communication challenges that are going to require us to adapt in order to stay as effective as before.”

While top lobbyists are always going to have strong communication and access with lawmakers “because they depend on information they can’t get anywhere else,” Bullington worries about the public’s ability to communicate and express their views during a virtual session, particularly if they live in an area with no or poor internet service.

“I think we should all be concerned,” he said.

Lobbyists, who spend big bucks courting lawmakers annually, whether in campaign contributions or meals, said their expenses aren’t as high this year. But it doesn’t compensate for the experience of a pre-pandemic session.