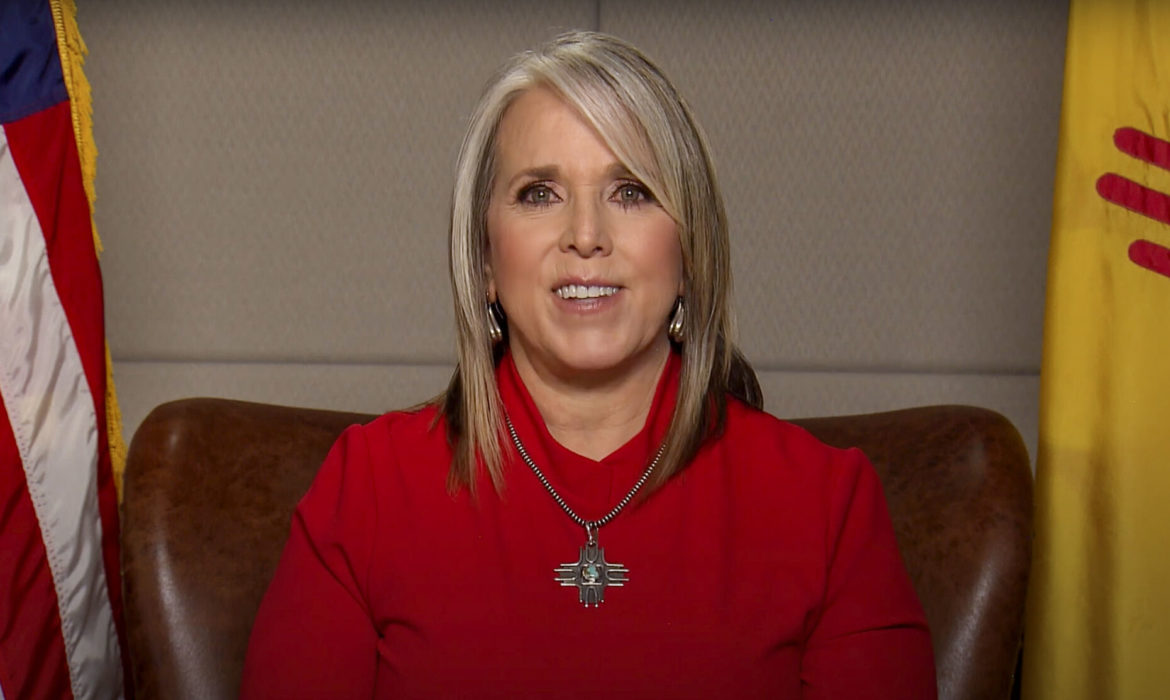 In this image taken from YouTube, Gov. Michelle Lujan Grisham delivers her 2021 State of the State address.

After a challenging year marked by grief brought on by a deadly pandemic, Gov. Michelle Lujan Grisham delivered a hopeful vision for New Mexico during her annual State of the State address Tuesday, including a plan to get more students back into classrooms in less than two weeks.

“Every school district in the state will be able to welcome all ages of students safely back to the classroom on Feb. 8,” the governor said in her 26-minute address, which she delivered virtually, without the usual pomp and circumstance.

The governor’s State of the State is typically given during a crowded event at the state Capitol on the first day of the legislative session. This one came a week after lawmakers convened.

Lujan Grisham, who has been the target of stinging criticism over a public health order that has restricted in-person learning for students for close to a year, said her administration has been working methodically and tirelessly with school officials, the Department of Health, teachers unions and others “to enhance the safety of school buildings and expand surveillance testing.”

“There’s no substitute for in-person learning, and there’s no negotiating about the health and safety of students, families and educators,” the governor said. “I believe the planning and hard work has paid off, and our state has developed a solid, epidemiologically sound plan for a safe expansion of in-person learning for all age groups, supported by union leadership. We will get this right, and we will move forward.”

Related: Districts can return to in-person learning in early February

The governor, whose remarks were recorded in advance inside her office at the state Capitol, began her speech by asking for a moment of silent reflection or prayer in memory of the more than 3,100 New Mexicans who have died from COVID-19 so far, as well as their grieving families and friends, and anyone in the state who has suffered this past year or experienced loss, loneliness or despair.

“As a state and as a country, we have felt more than our fair share of grief this past year,” she said, adding New Mexicans are resilient.

“New Mexico has shown incredible, unyielding strength, and that strength will help our state bounce back with speed, beginning right now,” said Lujan Grisham, a Democrat serving her first term in office.

Republican lawmakers did not issue a formal rebuttal to the governor’s remarks.

In an interview, Senate Minority Leader Greg Baca of Belen said he was happy about the governor’s commitment to “rebuild.”

“The part that really disappoints me, though, is I feel a lot of the damage was self-inflicted,” he said. “It’s not fair for us to issue these kinds of [public health] orders with broad expansive powers — and very general — and we have all these issues that have crept up on us and a ‘Hey, we’re gonna solve all your problems.’ That’s all good and well, but a lot of them were created by the public health orders.”

In the speech — which was supposed to be streamed on the governor’s Facebook page at 12:30 p.m. Tuesday but wasn’t due to a technical difficulty — Lujan Grisham touted her administration’s efforts to combat COVID-19 and what was achieved in New Mexico. That ranged from the state being the first in the nation to establish a drive-thru testing site to consistently ranking in the top 10 for per-capita testing.

The governor said her proposed budget would avoid harmful cuts and deliver $475 million in pandemic relief for residents and businesses, among other investments.

“With this approach, we will not have another decade of forced austerity. New Mexico’s economic recovery will not lag behind the nation’s as it did under the previous Republican administration,” she said in a dig at former Gov. Susana Martinez.

Lujan Grisham took another swipe at her predecessor when she said the pandemic had underscored the need for “robust reform” to the state’s behavioral health system, which she said was “undone by the vandalism of the prior state administration.” The governor touted the creation of the nation’s first text-only abuse and neglect hotline for New Mexico children and said her budget calls for an 800 percent increase in funding for suicide prevention services and programs for youth and adults.

“This year, when we launch the new Health Care Affordability Fund, we will get health coverage to 23,000 uninsured New Mexicans in just one year, and we will slash premiums for tens of thousands more,” she said, referring to legislation that would help offset health insurance costs for low-income residents.

The governor called on the Legislature to commit at least half of its capital outlay allocations, some $200 million, to new broadband investments.

“This is the most urgently needed infrastructure investment we can make as a state, and we must make it,” she said.

Similar proposals to use the endowment to fund prekindergarten and other programs for young children have failed repeatedly in past years.

“Together we will deliver to New Mexico voters the opportunity to make a generational investment in New Mexico children,” the governor said.

Lujan Grisham also made a push for lawmakers to approve $22 million for the New Mexico Opportunity Scholarship program, which she said would give 30,000 more New Mexicans “access to the two-year higher education they need without worrying about tuition and fees.”

The governor said the state will avoid an extended period of economic stagnation only if New Mexicans are forward-thinking about the future and expand business opportunities, including efforts to legalize recreational marijuana, which failed in 2019. The Legislature this year includes a new set of more progressive Democrats who could help Lujan Grisham achieve a more liberal agenda.

“I have no interest in another year of thousands of New Mexicans eager to get to work and make their future in this industry being told ‘no,’ just because that’s easier than doing the hard work to get to ‘yes,’ ” she said. “When we emerge from this pandemic, we can have the same old economy with the same old boom-and-bust future, or we can roar back to life, breaking new ground and fearlessly investing in ourselves, in the limitless potential of New Mexicans.”

View all State Of The State articles →