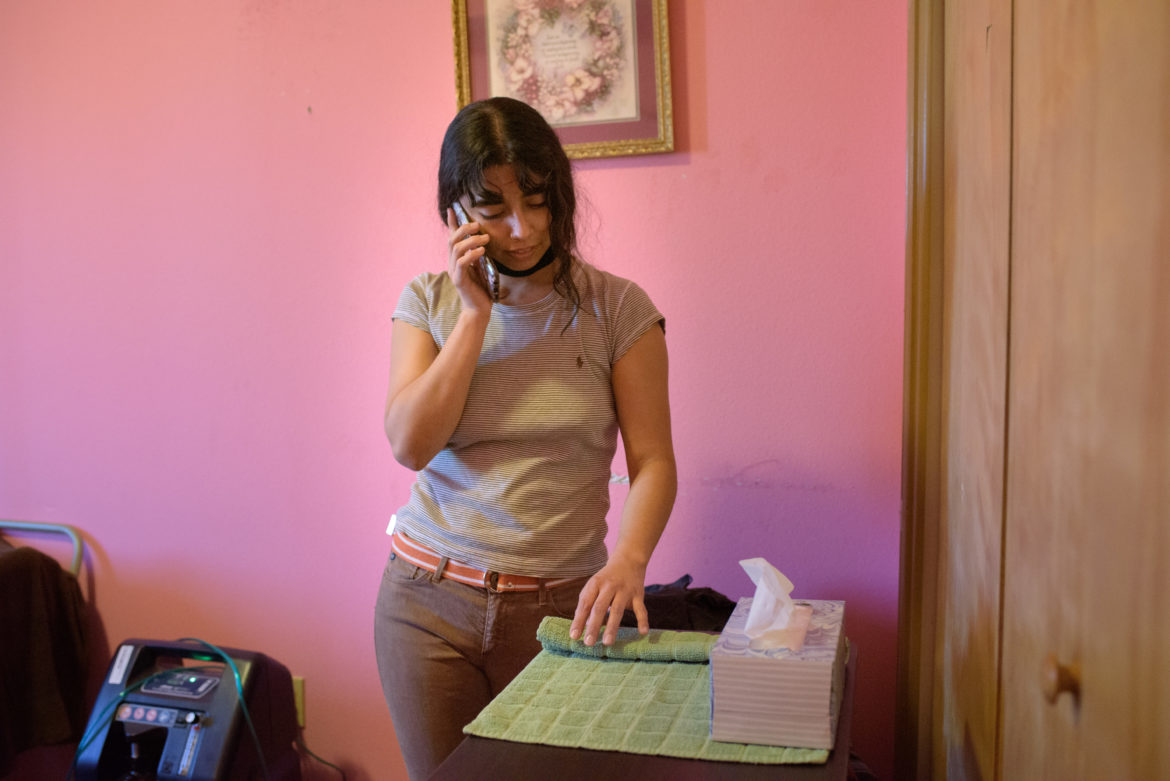 January 22, 2021 - Lina, a caregiver impacted by missed payments from the state, receives a call from her landlord about her overdue rent.

ALBUQUERQUE — Nearly every day for the past ten months, Lina, 23, has worked as a personal care assistant for Lisa Langrehr, a 60-year-old woman who is paralyzed on her right side. It’s been a full-time job for Lina — from 8 in the morning to 4 in the afternoon, seven days a week, she’s helped Langrehr take showers, accompanied her to and from medical appointments, paid the bills, done the laundry, walked Blacky the dachshund, and cooked meatloaf and enchiladas.

“Without caregivers, I don’t survive, I don’t survive at all,” Langrehr said. She’s been receiving in-home care services since 2013, when she fell in her kitchen and broke her neck. A cadre of three caregivers work in shifts, paid for through Medicaid. Lina, who requested her last name not be published to protect future employment opportunities, usually made about $800 every two weeks. She gets paid by direct bank deposit, and it’s her only source of income.

This story was written by Searchlight New Mexico and is republished here with permission.

But on the most recent payday, Jan. 15, Lina’s check didn’t show up in her bank account. Instead, she received a paper check in the mail on Jan. 22 — one week late.

Several caregivers, Medicaid recipients, and employees of case management companies told Searchlight that the delayed payments led to economic turmoil at an already difficult time, as the COVID-19 pandemic has strained finances and limited opportunities. A late payday is a disaster for the many Americans who live paycheck to paycheck. A 2019 government survey found that one-third of adults don’t have enough cash on hand to cover an unexpected $400 expense.

“I am personally committed to making sure that we address these issues quickly and completely,” Comeaux said in a press release Monday. “This has been such a difficult time for so many New Mexicans and we apologize that these payment changes may have resulted in any additional stress for these families.”

Medicaid payments play a particularly crucial role in New Mexico, where the government-funded health insurance program covers about 900,000 residents, or 43 percent of the state, the highest rate in the nation. Comeaux shared those numbers at a state legislative hearing on Jan. 22.

The payday snafu happened because the old payroll vendor, TNT Fiscal Intermediary Services, Inc., didn’t send the necessary bank account data to the new vendor, Palco, which took over at the beginning of this year, Comeaux said.

TNT’s president, Teresa Blubaugh, told Searchlight that her company was actually prohibited by federal law from sharing the bank information. Comeaux said the state disagreed with TNT’s interpretation of the law.

The New Mexico Human Services Department, which oversees Medicaid, realized this might be an issue at the end of December and tried to get direct deposit information from TNT “until the very last minute,” Comeaux said.

But the last minute came and went, with no success.

On Jan. 13, two days before payday, Palco still didn’t have all the data it needed, so HSD decided to put paper checks in the mail.

“All payments did go out on time, but there’s some challenges in the way they went out,” Comeaux said.

The 600 in-home caregivers who received late payments are employed through three different state Medicaid programs — the Developmental Disabilities Waiver, the Mi Via Waiver, and the Self-Directed Community Benefit. They make up about 12 percent of all in-home caregivers in those programs.

Palco and Conduent, the company Palco and TNT subcontracted for, declined to comment.

Comeaux told Searchlight that HSD alerted the caregivers and their case managers about the issue on Jan. 15 — payday. The department held information sessions and called patients who might be impacted by the lapse. Forms to update payment information are available on Palco’s website.

“This is a stressful transition for these families and [we] just want to make sure that we’re doing everything we can to help them through it,” Comeaux said.

Not just a case of the “hiccups”

In the Monday press release, HSD described the payday issues as “hiccups.” But for caregivers like Lina, the bungled payments severely disrupted their lives.

Lina said that she had to delay her rent payment, borrow money from Langrehr to pay a cell phone bill, and dip into her savings to cover her car insurance. She skipped a grocery trip and ate some meals at Langrehr’s apartment.

“I think that’s messed up,” Lina said. “I had to sacrifice groceries just to pay my bills. That didn’t seem fair.”

For one 26-year-old caregiver in Albuquerque, the consequences were even more dire — he went broke.

Searchlight is not printing his name to protect his case management agency from retaliation. He is paid by Medicaid to take care of his mother and grandmother.

He shared screenshots of his bank account showing that automatically scheduled payments for his cell phone and internet bills, plus other expenses, drove his account balance below $0. Overdraft fees pushed the balance even lower. As of Jan. 20, it was -$621.40. He should have received his paycheck five days prior.

The bank had told him they would close his account if he couldn’t pay. He worried about what might happen next: What about his credit score? Would he be able to open an account at another bank? And he was also falling behind on payments to Aaron’s, a national rent-to-own company from which he’d leased a television, a grill, a washing machine, and a dryer. He’d taken to ignoring their calls; what else could he do?

On Sunday, the check still hadn’t come through. “My bank is still overdraft bad,” he said. “I haven’t been eating the best. I’m literally down to the last of my gas. It’s just a mess.”

Comeaux said that HSD is considering how it might be able to help people who didn’t get their money on time. “We are looking at that closely and working with our general counsel to figure out what our options might be,” she said, adding that the laws limit what they can do.

“When they mess up, they get no consequence,” the 26-year-old caretaker said. “There’s nothing that happens to them. They still sleep at night, you know? I feel like it’s very unfortunate, and I think it’s very wrong.”

He finally got the check in the mail on Monday. It brought his bank account balance up to 98 cents.

Do you know something about Medicaid in New Mexico, or other parts of the health care system, that you’d like us to investigate? Contact reporter Ike Swetlitz at 505-469-0657 or ike@searchlightnm.org. We will only use your name with your permission.