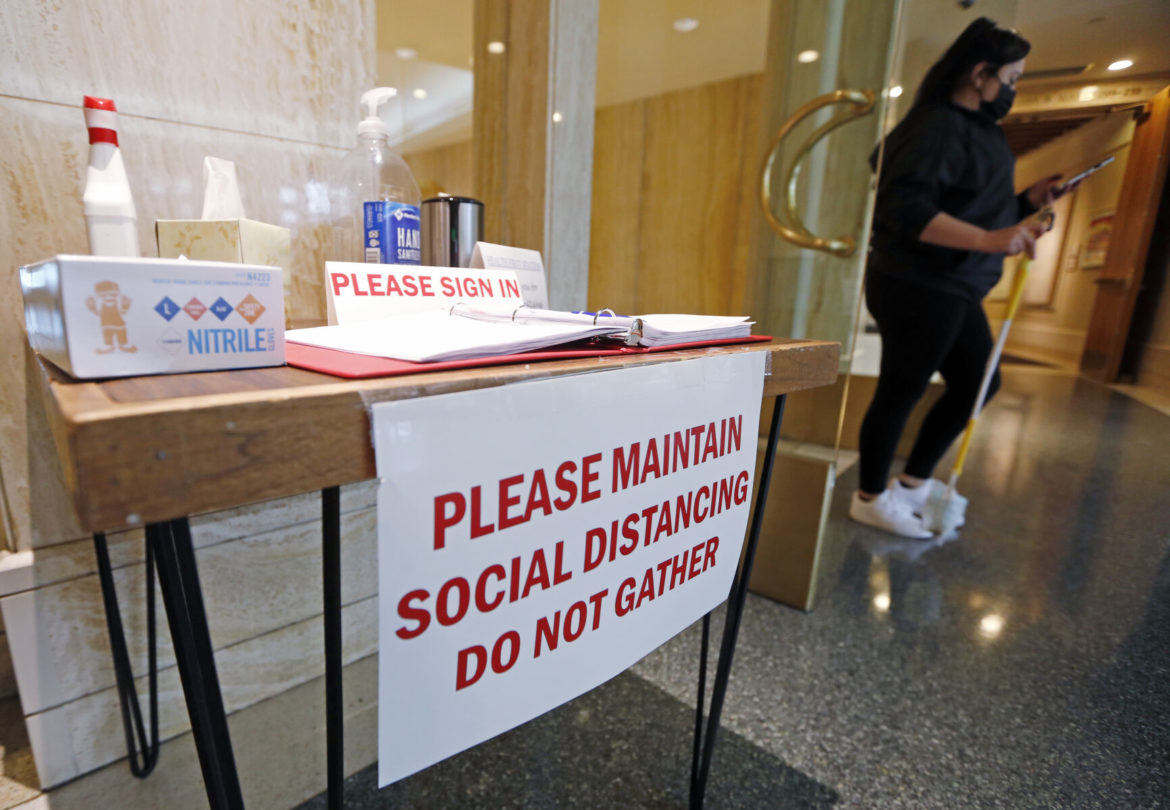 Victoria Mata, a maintenance worker at the Capitol, stands near a sign-in sheet Friday that offers a reminder to social distance along with hand sanitizer and other coronavirus prevention measures. Several people have tested positive for the virus at the Roundhouse, escalating partisan tensions.

A day after revelations of several people with ties to the Roundhouse testing positive for the novel coronavirus, including a Republican lawmaker, House leaders in both parties traded accusations and verbal jabs, creating more strife in their already rocky relationship while also politicizing COVID-19.

House Speaker Brian Egolf, D-Santa Fe, said some members of the GOP are consistently flouting the rules and putting others at risk. He said he is “constantly having to remind members to put on a mask” and “physically locking committee rooms as the only means to prevent certain Republican members from congregating.”

“I had one member who was in a room with other Republican members not wearing a mask,” Egolf said during a virtual news briefing Friday morning.

“I instructed him to follow the rules and put the mask on. Instead of doing that, he tilted the camera on his laptop so that I couldn’t see the lower half of his face,” Egolf said. “It’s that kind of childish behavior that we’ve been seeing the entire session. It is extremely frustrating.”

House Minority Leader Jim Townsend of Artesia fired back, accusing Egolf of an “autocratic” style of leadership that is failing because he won’t across the aisle.

“He just thinks he can just, you know, cram it down our throats, and that’s the way it’s going to be,” Townsend said.

Townsend also accused Egolf of violating his own rules, saying his office “was full of his staff” Friday.

He also noted Egolf had received a dose of the COVID-19 vaccine.

Townsend said Egolf told him, ” ‘You can rest assured that everyone who got a vaccination had one of those underlying conditions.’ And that may be, I don’t know, I talked to him for 15 minutes the other night when he was on the treadmill running, so I thought he was pretty darn healthy.”

Daniel Marzec, a spokesman for Egolf, confirmed Egolf was vaccinated.

The New Mexico Department of Health “included legislative staff and members who are required to be at the Capitol and who are either over 75 years of age or have an underlying condition,” as the state Department of Health requires for vaccine eligibility, Marzec wrote in a text message. “A number of staff and members received vaccines pursuant to the decision of the NMDOH.”

Townsend said he was particularly upset that Egolf accused the Republican caucus, in a statement late Thursday night, of holding a catered luncheon Monday at the Capitol “in which members did not wear masks and gathered in a small space.”

Egolf said Friday he had spoken with several members of the GOP who “acknowledged that House Republicans had a caucus meeting on Monday where they brought in catering.”

“I was dismayed,” he said during the news briefing. “Obviously, if you’re in a small committee room and you are eating, you’re not wearing a mask, and they should not have been doing that. It was inappropriate.”

Townsend denied the characterization. Republicans ordered Chinese food in individually wrapped containers, he said, adding he ate his food in his office, and others did, too.

Rep. Nathan Small, a Las Cruces Democrat who serves as vice chairman of the committee, disputed Townsend’s account of Thursday’s lunch. He acknowledged food was ordered but said one person wearing masks and gloves was tasked with creating single servings for lawmakers.

“We immediately identified the safest way to handle that,” he said. “If members were interested [in getting food], they were to come over one at a time in a socially distanced manner with their mask on to pick up their individual serving and then return to their office. There was no communal eating.”

Townsend said Egolf is making a big deal over behavior that takes place regularly outside the Roundhouse.

“Here’s the truth of the matter: At five o’clock or six o’clock or whenever we finish up here, sometimes Republicans and Democrats, hand in hand, go to a local restaurant and sit down at a table and have dinner together at night,” Townsend said. “And then we’re supposed to come down here, put our mask on, stay six feet away from each other like we’re protecting each other.”

The tensions between Egolf and Townsend have become a regular occurrence at the Roundhouse.

When asked, Egolf disputed the notion he was engaged in a tit for tat with the minority party.

“I am moving ahead to the important work of the session and look forward to working with responsible members of the minority through the remaining days of the session,” he added.

With seven weeks still left in the 60-day and mostly virtual legislative session, Egolf has his work cut out for him.