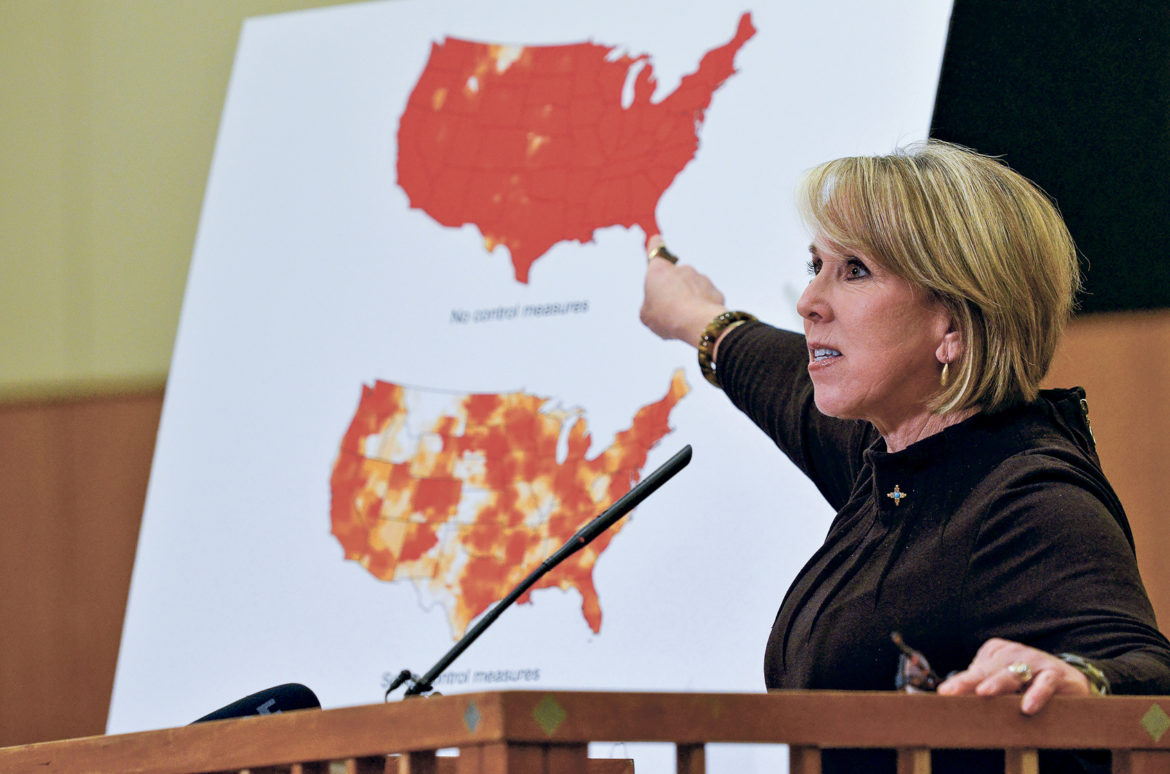 Gov. Michelle Lujan Grisham points to a visual aid that shows the spread of COVID-19 when varying levels of control measures are enacted, during a news conference Monday at the Capitol. Lujan Grisham put in place new restrictions that close down all but essential services in the state. 'I need you to heed this order,' the governor said during the news conference.

State lawmakers in both the House and Senate have groused for months about how Gov. Michelle Lujan Grisham employed the power of the executive branch during the COVID-19 crisis, vowing to take up the issue during this year’s 60-day session.

The debate has begun in earnest this week, as legislators consider bills that proponents say will establish a system of checks and balances to ensure they play a role in any emergency actions.

Members of the House State Government, Elections and Indian Affairs Committee on Wednesday voted 7-2 to approve House Bill 139, which limits a state of emergency to 90 days — unless the governor convenes a special session of the Legislature, which then has the power to restrict, suspend or end the state of emergency.

Nibert agreed, telling committee members the state of emergency has “impacted every New Mexico for the last 10 months without any real legislative involvement.”

Meanwhile, the Senate Health and Public Affairs Committee agreed Wednesday to postpone a longer debate and possible vote on related legislation until a future meeting.

Senate Bill 74, sponsored by Senate Minority Leader Greg Baca, R-Belen, would set a limit of 14 days on any declared state of emergency and require either the full body of the Legislature or leaders from both chambers to act to maintain the declaration for a longer period of time.

As the session began last month, Baca talked about the matter at length, emphasizing his concerns about emergency powers aren’t about whether a governor is a Republican or Democrat.

“That’s too much power in the hands of one person,” he said.

A least six bills have been introduced to give lawmakers more say in state-of-emergency provisions.

The varied legislative efforts come nearly 11 months after Lujan Grisham announced a public health emergency for the state as the coronavirus pandemic began to envelope the state.

Months after the initial declaration, both Democratic and Republican members of the Legislative Council voted to ask outside attorneys to determine whether Lujan Grisham should have asked for authorization from the Legislature for $30 million in COVID-19 emergency spending in March and April.

Beyond that, Republican lawmakers have questioned the impact of her actions, contending they have unfairly hurt small-business owners and led to the loss of thousands of jobs around the state. Many have called for her to “reopen” the state, focusing on businesses and public schools. The governor also faced heavy criticism at times for state health orders that closed indoor dining.

The National Council of State Legislatures reports states around the country have different ways of dealing with emergency declarations. Some allow the governor to act; many involve some form of legislative involvement.

Arizona requires an immediate special session to keep any declaration of emergency going after the governor has called for one, and in Kansas, a state of emergency cannot last beyond 15 days without approval of the Legislature.

Nora Meyers Sackett, spokeswoman for Lujan Grisham, wrote in an email the Governor’s Office is not yet familiar with all of the proposed legislation.

“The governor’s ability to respond quickly to the pandemic has saved lives,” she wrote. “As the last 11 months have demonstrated, it’s important that a governor have the flexibility and authority to take immediate action to prevent loss of life in any public health emergency or emergency in which New Mexican lives are endangered. That’s what the people elect a leader to do.”