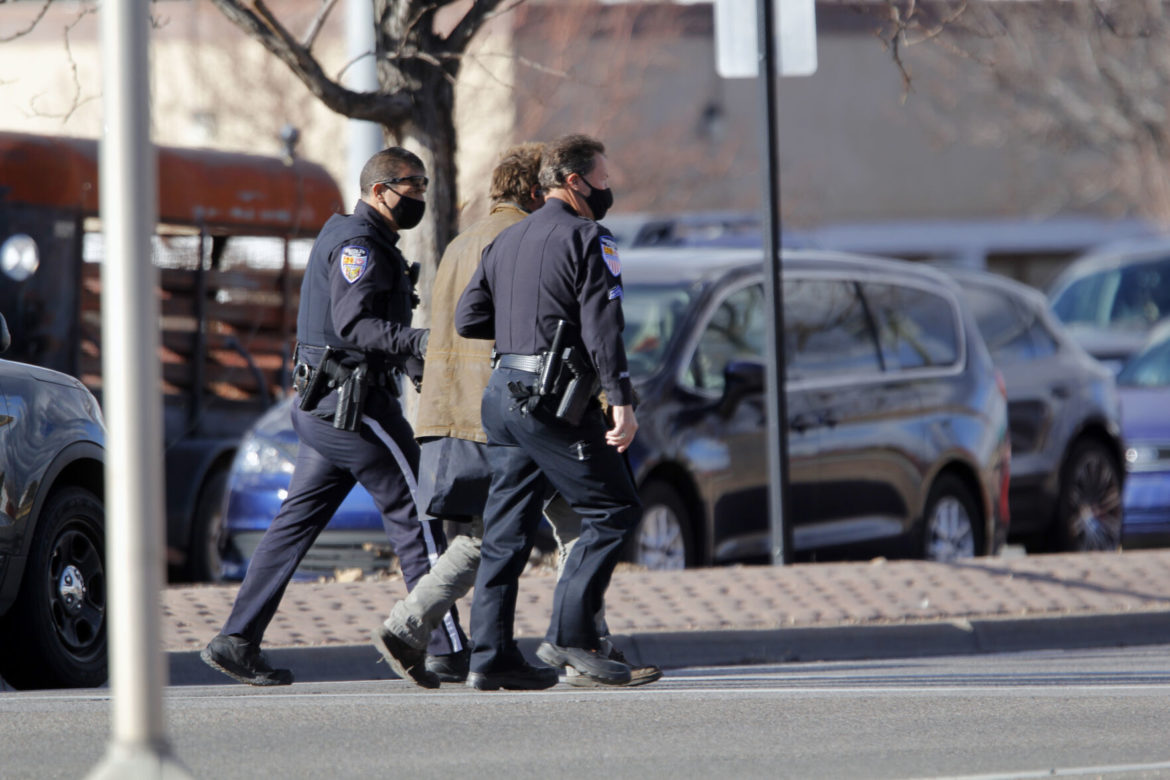 Two Santa Fe Police officers escort a man in December at the intersection of Cerrillos Road and St. Michael’s Drive.

An overhauled civil rights bill that would prohibit “qualified immunity” as a defense to legal claims filed against government agencies would cap damages at $2 million, a change intended to assuage concerns about potentially crippling financial impacts on local governments.

In another major change to a revised version of House Bill 4, introduced Friday, legal claims brought under the proposed New Mexico Civil Rights Act could only be filed against a government agency, not an individual employee.

“We’re working to strike a balance between the needs of New Mexicans to have access to justice in a state court with the concerns that had been raised by counties and cities and state agencies,” House Speaker Brian Egolf, one of the sponsors, said in a telephone interview.

“This is a series of compromises that we’re making because we want people to feel that their voice is being heard in a legislative process and that we’re being responsive as concerns are raised,” the Santa Fe Democrat said.

The measure, which has generated stiff opposition from government agencies, would allow people to file lawsuits in state courts against state and local government entities over violations of their constitutional rights. Currently, such claims must be filed in federal court.

Local governments and other opponents have been particularly critical of the provision that would eliminate “qualified immunity,” which is a legal doctrine that can shield government officials, including police, from being held personally liable for actions that violate a person’s constitutional rights.

The revised version also prohibits public employees from using the Civil Rights Act to bring claims against their public employer.

“There’s already lots of statutes that give public employees an ability to bring a claim against their public employer,” Egolf said, adding that government employees can also file claims under federal law. “We’re going to leave those in place and clarify that the Civil Rights Act is not meant to supplant those.”

But “none of that is in this bill,” he said at a committee hearing, adding “there’s no shortage of ways for members of the public” to sue local governments when wrongdoing has occurred.

Forte also expressed concerns about lawsuits against individual employees under the original version of the bill.

“This is already hurting our retention and recruitment because they’re concerned on how this is going to affect,” he said.

Forte could not be reached Friday for comment about the revised legislation.

In a virtual news briefing before the substitute bill was introduced, civil rights attorney Maureen Sanders said a lot of the opposition from government agencies “is that this will cost the state and local governments money and may even end up in bankruptcy [for] cities and villages and towns.”

“There’s just been no evidence of that,” she said. “What we have here is a lot of ‘sky is falling’ speculation provided by the local government entities and forgetting the importance of this legislation to the people within their jurisdictions.”

“When someone acting in an official government capacity, such as a police officer, violates a citizen’s constitutional rights, certain laws and immunities protect them from liability, regardless of the damage they’ve caused to regular New Mexicans,” she said. “This undermines individual rights, allows wrongdoers to escape accountability and leaves victims … with no way to address the injustice in court.”

Boatman said the bill would help right the wrongs of people whose constitutional rights have been violated.

“Have you ever heard the phrase, ‘Ignorance of the law is no excuse’? A citizen cannot walk into court and use the defense, ‘I didn’t know it was illegal,’ ” she said. “Why then should government actors be able to essentially use this defense, simply because our court hasn’t ruled on almost the exact same set of circumstances? This bill would put an end to that, allowing New Mexicans that have had their constitutional rights violated to at least have their day in court.”

The news briefing and introduction of the substitute bill came a day after a New Mexico State Police officer was shot and killed near Las Cruces.

Asked whether there was a tone deaf aspect to the timing, state Rep. Georgene Louis, D-Albuquerque, who is also sponsoring the bill, said it was a “very valid question.”

“We’re so sorry for the loss of one of the officers. Our condolences go out to family, friends and fellow officers — it is really such a tragedy,” Louis said.

“That, however, unfortunately, doesn’t stop our 60-day session,” she said. “While our prayers go out to the family of the officer, we still have the people’s work to do, and that’s how we’re moving forward.”