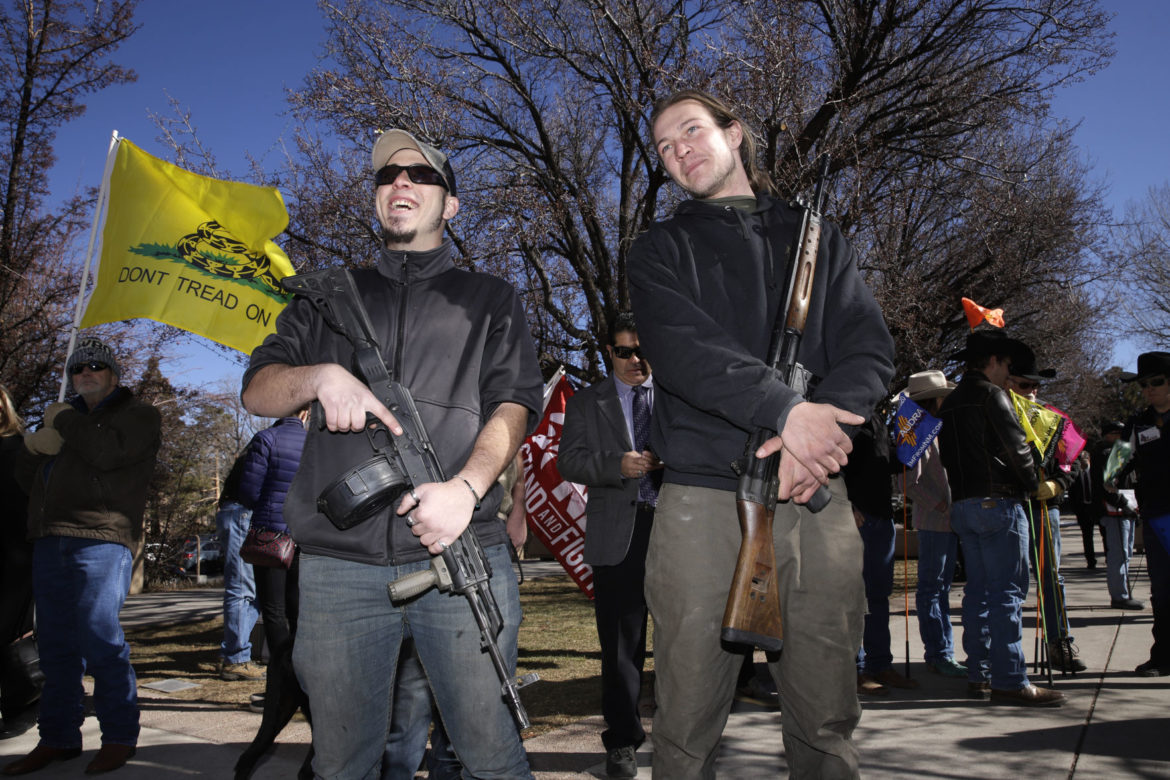 Matthew LM Manning, left, and Colton Thompson of Madrid brought their guns to a January 2020 protest against the state's 'red-flag' law. A bill in this year's session would expand the law, adding police to the list of those who can petition a judge to temporarily seize a person's firearms.

Gun legislation is a surefire way to rile people on both sides of the aisle.

Get ready for a spirited debate, New Mexico, because the first two measures pertaining to firearms in this year’s 60-day legislative session will be considered Tuesday by the House Consumer and Public Affairs Committee.

“Look, in all of these gun bills, there’s always going to be objections that they go too far,” Rep. Daymon Ely, a Corrales Democrat who is sponsoring one of the measures, said Monday.

“When you step back from it, gun owners should be in favor of what I’m doing,” he added. “Nobody should want a gun in the hands of someone who is an imminent threat to themselves or others.”

“Instead of making bills that will penalize criminals and lower crime, they keep coming after legal gun owners, and we get angry about that,” she said.

House Bill 193, which Ely is co-sponsoring with Rep. Joy Garratt, also an Albuquerque Democrat, would expand New Mexico’s so-called red-flag law by adding “law enforcement officer” to the list of people who can seek a court order to temporarily take firearms away from a person who is considered a threat, among other changes to the existing law.

Under current law, police officers can only seek a court order if it is requested by a family member, a school official, an employer or someone who has had a “continuing personal relationship” with a person considered a threat to themselves or others. The change would allow an officer to seek a court order based on his or her own observations, “absent receipt of credible information from a reporting party.”

Lord, founder of Pro-Gun Women, said lawmakers previously ignored sheriffs and others in law enforcement who told them how to change existing laws to improve public safety.

“The only good amendment would be to delete the entire red-flag bill,” she said.

The other measure scheduled to be considered Tuesday, House Bill 166, would make it a fourth-degree felony “to use a three-dimensional printer or similar device to manufacture or produce a firearm or firearm component unless that person is a federally licensed gun dealer or manufacturer,” among other provisions.

“I checked with law enforcement,” she said. “There is no ghost gun use in crimes. It’s not a big issue.”

“The bill creates an over-the-top new list of felony offenses and restrictions that exceed federal law,” the group said in a news release.

The group also contends the proposed changes to the existing red-flag law would infringe on gun owners’ rights.

A law enforcement officer or agency “shall take possession of all firearms subject to the extreme risk firearm protection order that are relinquished by the respondent or are in plain sight or are discovered pursuant to a lawful search” under the proposed changes.

“This violation of due process order will allow law enforcement to search and seize weapons and trample on a person’s civil liberties, even when no crime had been committed or alleged to have been committed, for the order to be issued,” the group wrote in a news release. “It would also allow the police to search the home of the person and seize any firearms the officer finds.”

“We are confident that these changes will help us to keep guns out of unsafe hands and will serve as a better and safer tool for law enforcement,” she said.

A separate piece of legislation that has been introduced this year, Senate Bill 224, relates to gun safety and creates the misdemeanor crime of failure to secure a firearm. The bill would require that firearms be secured in a locked container or by a lock “so as to render the firearm inaccessible or unusable to any person other than the owner or other authorized user.”

During last year’s legislative session, the red-flag law unleashed a wave of controversy and drew scores of people who packed the galleries at the Roundhouse to speak in support or opposition.

Since the Capitol is off-limits to the public this year amid ongoing concerns about the spread of COVID-19, the controversy over gun legislation in New Mexico may not be as evident, but it certainly hasn’t disappeared.