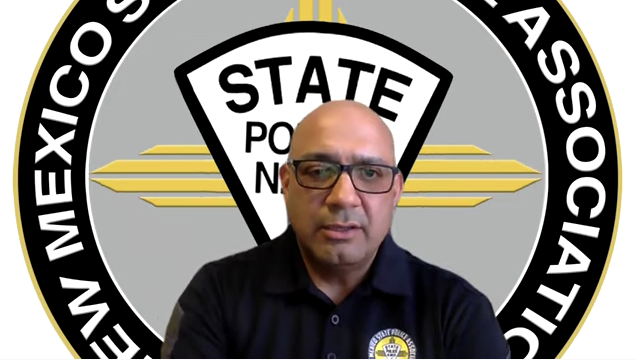 The president of the New Mexico State Police Association is accusing Democratic lawmakers of pursuing legislation that would give criminals more rights than police and take away tools he says officers need to safely do their jobs.

“One of the things that needs to be said is the attack on law enforcement by our current legislators,” Sgt. Jose Carrasco, president of the union representing state police officers, said in a 15-minute video to lawmakers and New Mexico residents.

“When you have senators and representatives personally attacking law enforcement, creating laws that basically tie our hands so we can’t enforce the laws, we can’t protect ourselves, we can’t protect the citizens, something finally has to be said,” Carrasco said in the video, posted Monday on YouTube. It had received more than 3,800 views by Tuesday evening.

“I know it’s going to upset some people,” added Carrasco, who did not return a message seeking comment.

In the video, Carrasco pointed to three specific pieces of legislation, starting with Senate Bill 227, which is sponsored by Democratic Sen. Linda Lopez of Albuquerque. He noted the bill is called the “inspection of police misconduct investigation” but said the title is misleading.

SB 227, which has not yet faced a committee hearing, actually doesn’t have a title but calls for several law enforcement reforms, including a procedure for reviewing investigations of officer misconduct and restrictions on officer use of physical force.

“It’s taking the tools away from us, our less lethal option tools, to be able to effect an arrest peacefully and without having to use any deadly force,” he said. “However, [Sen.] Lopez is taking that ability away from us.”

The measure would prohibit law enforcement officers from using force unless they had first tried all possible deescalation efforts. It also would ban the use of rubber bullets and chokeholds, and says officers “shall not direct a dog to bite a person.”

“We can’t even use a canine anymore, like at all,” Carrasco said. “They’ve taken all the tools that we use to go in there and hopefully take the people or person into custody without having to use lethal force. You’re taking that away from us. I hope, I hope and I pray, that I can at least have a fighting chance and have my ballistic vest on when I go into the residence. I hope that we can still do that.”

In a statement, Lopez wrote there is no reason for police to use deadly force “when it is not absolutely necessary and clear alternatives to deescalate a situation exist.”

“Bad practices by bad actors have resulted in heartbreak and tragedy for so many in our communities, especially people of color, who are disproportionately the victims of police violence,” she wrote.

Aaron Velarde, president of the Bernalillo County Deputy Sheriff’s Association, said law enforcement encounters are dynamic, and it isn’t always feasible to attempt deescalation, especially during violent encounters where the life of an officer or the lives of others are at risk.

“This bill places egregious burdens on law enforcement and removes an officer’s ability to resolve situations utilizing less than lethal options,” he said. “By removing these tools from law enforcement, this bill actually increases the likelihood that deadly force will be utilized. This is not the situation that we want to place our officers or the public in.”

Lopez wrote that while police union leaders have to advocate solely on behalf of their members, she has to “weigh all the facts” as a senator, including that the Albuquerque Police Department has been under federal oversight because of a “pattern and practice” of unconstitutional “use of force” and “deadly force.”

“By requiring the establishment of use-of-force policies and de-escalation protocols state-wide as standard operating procedure, we can get to the root of this problem and properly train our law enforcement community to handle situations in a way that will keep everyone safer,” she wrote.

Carrasco warned lawmakers “it’s going to be the criminals using deadly force on the officers that are trying to enforce your laws that you wrote.”

Carrasco also took issue with House Bill 4, which would prohibit “qualified immunity” as a defense to legal claims filed against government agencies and would allow people to file lawsuits in state courts over violations of their constitutional rights.

“There are bad senators, bad representatives, bad doctors, bad priests, bad nurses. There’s bad in every single profession. But yet, we’re the ones that get picked on nonstop,” he said.

Carrasco also took a direct aim at the sponsor, House Speaker Brian Egolf, D-Santa Fe, who noted the death of a state police officer last week as he wrapped up a news conference.

“One thing that I wanted to tell you, Mr. Egolf, and I wish I could tell you face to face, is that my brothers and sisters do not appreciate you making a comment about our brother at all,” Carrasco said, referring to Egolf’s comments shortly after the fatal shooting of Officer Darian Jarrott near Deming.

“It wasn’t even heartfelt,” Carrasco said. “We would just wish that you … just didn’t say anything about our fallen brother because he’s one of the ones that you’re trying to take rights away from, too.”

Egolf wrote in a statement he invited Carrasco for a meeting Wednesday afternoon at the Capitol to discuss his bill in its current form.

“After extensive revisions in the House Judiciary Committee [on Monday], the bill addresses all of the concerns he discussed in his video, and I am glad to walk him through each modification made,” Egolf wrote. “Sergeant Carrasco informed me he plans to read the bill before our meeting [Wednesday], and I look forward to a positive discussion.”

In the video, Carrasco also raised concerns about a controversial bill that would eliminate mandatory minimum sentences for a number of crimes — including criminal sexual penetration of a minor.

“So somebody that commits a rape on a child, they want to remove the minimum sentence, and there’s other heinous crimes in there,” he said, referring to House Bill 140, which has been tabled indefinitely.

“As the laws stand right now, some of these people that commit some horrendous crimes are … out in the street before we even leave the parking of the jail,” Carrasco added. “This only makes it worse when the minimum sentences are being removed and the criminals are allowed to go back in the street to continue their life of crime, continue victimizing our families, breaking into their homes, stealing their cars, stealing their identity, committing all kinds of crimes, killing, murdering people.”

Carrasco urged New Mexico residents to contact their lawmakers and tell them to “stand by law enforcement.”