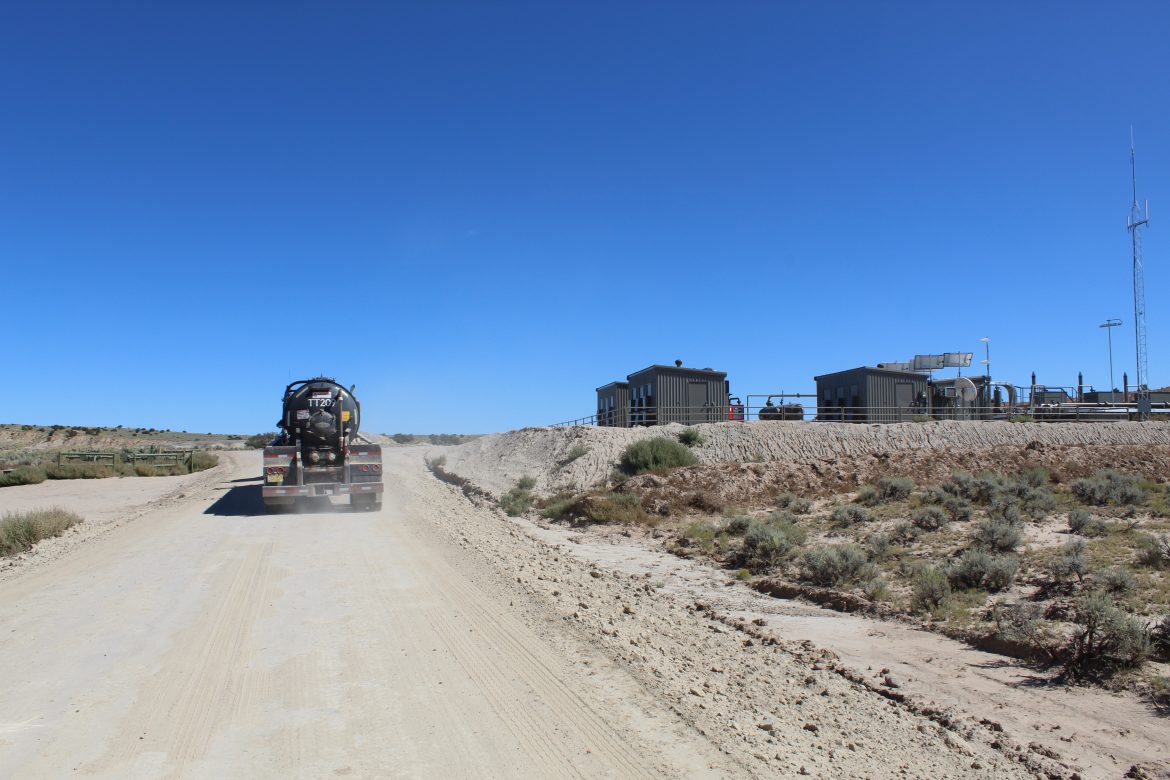 A tanker passes a well pad with six fracking wells.

A bill that would pause new fracking permits in the state passed the Senate Conservation Committee on Saturday, while an attempt to amend the Energy Transition Act died in the committee.

Albuquerque Democrats Sen. Antoinette Sedillo Lopez and Rep. Patricia Roybal Caballero co-sponsored SB 149. The bill would enact a four-year pause on fracking permits while the state conducted studies to determine the impacts of fracking on agriculture, environment and water resources and public health.

“Nothing [would] affect existing operating wells,” Sedillo Lopez said. “It’s to pause those [new permits] for four years to give us two long sessions and two short sessions to hear from our regulating agencies about what is the impact of this technology on our air, land and water, and also to make recommendations for what should happen.”

Biologist and author Dr. Sandra Steingraber, who spoke in support of the bill as an expert witness, highlighted the public health impacts that have been linked to living near fracking wells in a growing body of peer-reviewed research.

“Smog and toxic air pollution follows fracking wherever it goes and there again is no real good way to mitigate this, because the air pollution begins as soon as the drill bit goes into the ground,” Steingraber said. “So far, the public health problems associated with drilling and fracking include poor birth outcomes among babies born to pregnant women living near fracking sites, respiratory impacts cancer, heart disease—and more recently we understand, mental health problems.”

The legislation was opposed by oil and gas groups, including the Independent Petroleum Association of New Mexico and lobbyists for Occidental Petroleum, ConocoPhillips, Excel Energy and Chevron, which argued that fracking is safe and that concerns about the technology are overblown.

Other opposition to the bill centered on its potential economic impact. The fiscal impact report provided by the Legislative Finance Committee estimated the pause would cause “severe revenue losses” over the bill’s proposed four year moratorium.

Much of the debate focused on the state’s reliance on oil and gas to generate revenue.

“We’re talking about cutting our state budget by a fourth, or a third, that has some pretty serious implications,” said Sen. Joseph Cervantes, D-Las Cruces. “Do you have a bill or does anybody have a bill proposing to supplant that amount of money? Is there a bill in place to generate that additional say 30 percent or 40 percent of revenue in the state?”

Sedillo Lopez responded that SB 149 does not specifically deal with replacing that revenue, but added that “there are actually quite a few bills that seek to diversify our tax [base].”

Sen. Liz Stefanics, D-Cerrillos, asked whether Sedillo Lopez would be open to amending the bill to remove the moratorium on new permits but maintain the requirements that state agencies study and report back on the impacts of fracking on the populace. Sedillo Lopez seemed open to the idea, but the committee did not seek to amend the bill.

SB 149 ultimately passed 5-4, with Cervantes voting with Republicans against it. It heads to the Senate Judiciary Committee next.

The Senate Conservation Committee also effectively killed a bill that would have tweaked the Energy Transition Act (ETA) to restore some of the regulatory authority that was stripped from the state’s Public Regulation Commission (PRC) in the ETA bill that was signed into law in 2019.

SB 155, sponsored by Stefanics and Albuquerque Democratic Senators Bill Tallman and Sedillo Lopez, would remove a provision of the ETA that guarantees utilities like PNM can recover 100 percent of costs associated with closing down a coal-fired facility.

“The first amendment removes the 100 percent automatic guarantee,” Tallman said. “Of course, utilities are going to ask for 100 percent compensation—it’s just that our amendment will eliminate the guarantee of 100 percent cost recovery.”

The bill would also have restored the PRC’s ability to make determinations as to whether utilities raise rates for customers to cover decommissioning costs and undepreciated assets.

“Hidden in [the ETA] is language that categorically forbids the PRC from disallowing PNM from recovering what it claims are any costs that were in PNM’s rate base prior to 2015,” Tallman said. “This puts PNM in charge of setting its own rates without PRC’s ability to adjust those charges even if they are not fair and just.”

The bill was opposed by some environmental and social justice groups, including the Sierra Club, the Center for Civic Policy, the NAVA Education Project and the San Juan Citizens Alliance. These groups claimed the amendments were unnecessary and feared the tweaks would threaten the funding mechanisms established in the ETA for helping coal-reliant communities in the state to transition away from coal.

But other groups, including YUCCA, Renewable Taos, Los Jardines, Retake Our Democracy, Interfaith Worker Justice New Mexico and the utility-focused Citizens for Fair Rates and the Environment, spoke in support of the bill, arguing that the PRC’s regulatory authority should be reinstated.

During debate on the bill, Cervantes said he was not a big supporter of the ETA in 2019, and said that removing PRC authority was an important piece of the legislation.

“We knew damn well that we were taking the PRC out of the process,” Cervantes said. “We knew it, we debated it, we discussed it a great length.”

Sen. Steven Neville, R-Aztec, argued that though he did not support the ETA in 2019, he believed PNM customers should pay for its transition away from coal.

“I think if we’re going to do this conversion [to renewables] that now these regulated entities need to have the ability to recover the dollars that they spend, that they have invested,” he said.

The committee tabled the bill on a 5-4 vote, with Democratic Las Cruces Senators Carrie Hamblen and Cervantes voting with Republicans to kill the bill.