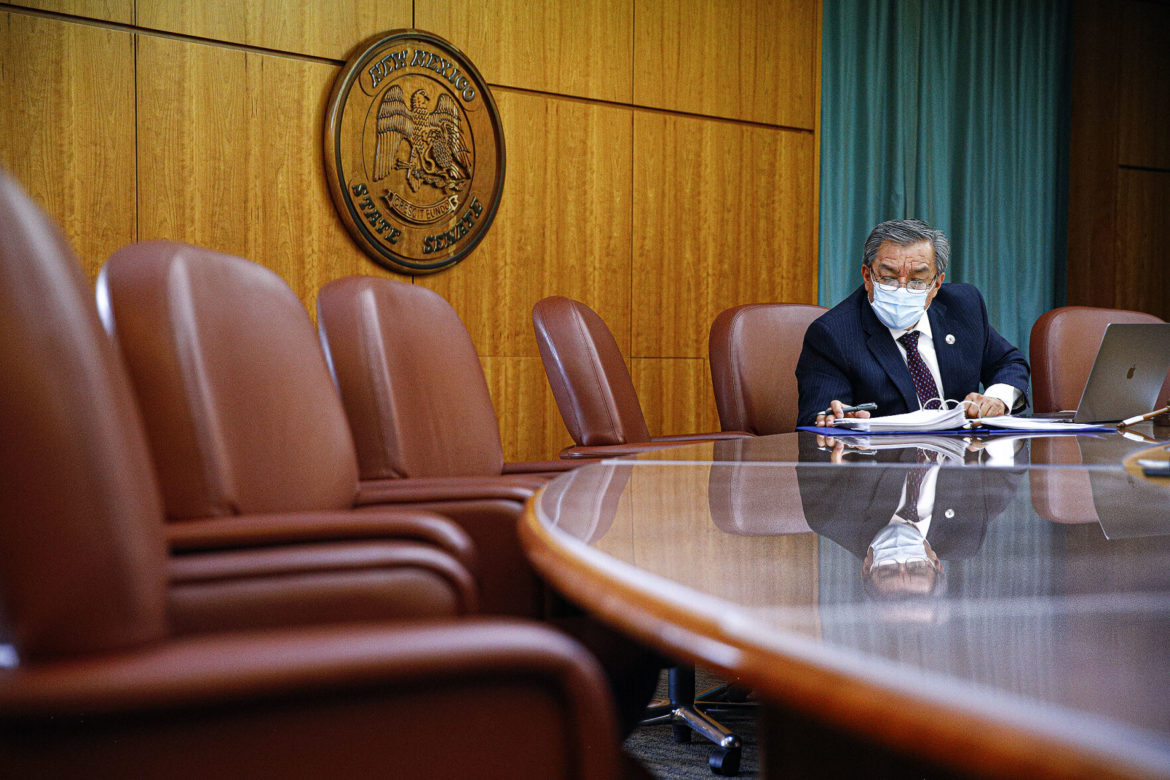 Sen. Benny Shendo Jr., D-Jemez Pueblo, looks through paperwork during a meeting of the Senate Tax, Business and Transportation Committee on Thursday. Shendo meets with committee members in a mostly empty committee room with a small staff to assist with organization and Zoom management.

To hear House Speaker Brian Egolf tell it, public participation in this year’s largely virtual legislative session has been robust even if the doors of the state Capitol have been closed to everyday New Mexicans.

In the second and third weeks of the 60-day session, more than 6,100 residents from 32 of the state’s 33 counties have voiced their opinions during committee hearings in the House of Representatives — up from the 2,400 who tuned in the first week.

Egolf’s office touted the numbers Tuesday in a news release, declaring virtual participation “continues at a record-setting pace” in the House.

But how many New Mexicans have been shut out?

“It’s hard to quantify,” Egolf said. “But what’s not hard to quantify is the public health risk that comes with having the building open to the public. This is a decision that was made primarily to protect public health. … It’s not possible to have the public in here in any safe way, so we’re trying to do the best we can given the constraints of the COVID-19 pandemic.”

While legislators conduct most lawmaking over Zoom due to the contagion risk that spurred the decision to keep the public out of the Roundhouse — a building that in past sessions was filled with hundreds, sometimes thousands of people on a daily basis — the end result has proven challenging for regular people who want to weigh in on legislation, not to mention for advocates and lobbyists accustomed to face-to-face interactions.

Miranda Viscoli, co-president of New Mexicans to Prevent Gun Violence, said advocating for a bill that would expand the so-called red-flag gun law has been difficult without being present at the Roundhouse.

“It’s very hard to get that attention when we can’t be in the building,” she said.

“We sit there for five hours at a time to get 10 seconds, and that’s a win of the day when we get 10 seconds with someone, and they say, ‘Yes, thank you for these talking points. I will read them, and we are behind this bill,’ ” Viscoli said. “That lets us know where we are. Right now, we’re just blind, like we are flying blind without any sense of what is going on.”

“We can text them a little bit, but you don’t want to bother them. We try to be respectful of that,” she said. “You can send emails, but when the NRA [National Rifle Association] is sending 5,000 emails from all over the country to New Mexico, their emails blow up.”

Khal Spencer said he sent lawmakers on the Senate Health and Public Affairs Committee an email Thursday to chime in on a separate firearms bill. Only one lawmaker, Sen. Stuart Ingle, a Republican from Portales, responded, he said.

Under normal circumstances, Spencer said he would’ve gone to the Capitol to testify.

“I think there’s something to be said in government for being there,” he said. “I was chair of the county Transportation Board for a long time in Los Alamos, and I would be in council chambers testifying and taking questions and looking people in the eye. I think that kind of person-to-person contact makes a big difference.”

In normal times, the Roundhouse can accommodate hundreds of people in committee rooms. According to the building superintendent, there are about 926 seats for the public.

But Egolf said that even without the ability to be in the building, more people have been testifying at committee hearings, at least in the House, than ever.

“In the last two weeks, 6,100 people have logged in to House committee Zoom meetings … so we’re talking 600 people per day,” he said. “In terms of numbers, I think that is way more than we would normally see participating.”

In the Senate, Democrats haven’t been keeping track of the numbers.

Nonetheless, Senate Majority Leader Peter Wirth, D-Santa Fe, said the largely virtual session has closed the door for some but created new opportunities to participate for others.

“We’ve opened this process in a way that has never happened before, allowing people to testify from anywhere,” he said. “There is some frustration, people saying they are not allowed to testify.”

Members of the public are also frustrated about not being physically present.

Wirth said the question of how much public testimony to take isn’t unique to this year’s legislative session.

“That’s the prerogative of the chairs,” he said.

As such, each committee chairperson has developed their own set of rules.

“She’s very polite, but she cuts people off at two minutes when that happens,” Soules said.

In the Senate Health and Public Affairs Committee, Sen. Jerry Ortiz y Pino, D-Albuquerque, gave opponents and proponents of a controversial firearms bill a total of 15 minutes each to make their arguments. As a result, seven people spoke against the measure while 10 testified in support.

In a letter to the editor, Stephanie Haan-Amato of Las Cruces complained about feeling “silenced” when she didn’t have the opportunity to comment on an environmental bill.

“I feel disenfranchised,” wrote Haan-Amato, who declined an interview.

“Most of the pressure [committee] chairs get is to keep bills moving, not maximize testimony. So, over time, testimony is bound to lose out overall as the session wears on,” he said.

But a mostly virtual session also has leveled the playing field of advocacy, he said.

“The advantage that lobbyists and advocates have over the public is diminished,” he said, adding that people who are in the building full time have a leg up on public participants who must work.

“That’s gone now, really, as anyone with a phone and 10 minutes to spare can offer testimony,” he said.

Melanie Majors, executive director of the New Mexico Foundation for Open Government, said she had a call from a woman who told her she used to go to the library to tune in to the legislative session because she doesn’t have internet. Libraries are closed in the pandemic.

Gov. Michelle Lujan Grisham said she has heard less negative feedback about the changes than she expected. But it has been a source of complaints, she added.

“This is much harder, and I think advocates and lobbyists and the general public are struggling,” she said. “It’s not unlike the negative feedback that’s all fair that we hear about distance learning.”

But the governor said New Mexicans are making the best of a difficult situation.

“When we hear from people, they’re challenged — no question — and we’ve definitely heard from people, but I was actually surprised it wasn’t louder,” she said.

Egolf said the mostly virtual session has opened opportunities for people who live far from the capital.

“We have gotten a lot of communication, especially from New Mexicans in Silver City and Las Cruces and Farmington, places that are distant from Santa Fe, who like being able to offer testimony and participate in a hearing without driving 10 hours round trip to Santa Fe for the ability to speak for a few minutes,” he said.

On the House side, some committee chairpersons, like Rep. Moe Maestas, D-Albuquerque, tend to let members of the public speak longer than the prescribed time limit. Others stick to a strict one- or two-minute time limit rule, and speakers often find themselves cut off midsentence when the clock runs out and their audio feed ends.

Sometimes, too much public comment can impede the business of legislation, said Sen. Daniel Ivey-Soto, D-Albuquerque.

“On some issues, there are a significantly larger group of people who want to speak because they don’t have to make the effort to drive to Santa Fe and be here. It’s more difficult to figure out, ‘Are we really getting the voice we need or the same six talking points on the same bill 86 times?’ ” he said. “Every single session I’ve been in, public comment has made a difference on certain pieces of legislation.”

He said public input can help legislators see a piece of legislation in a different way.

On the other hand, he said, “Sometimes we have 250 people who have logged in, and they want to speak about the bill, and that’s gonna take away time for us to debate that bill.”

House Minority Leader Jim Townsend, R-Artesia, said he’s received dozens, if not hundreds, of complaints from people who tried to log into legislative meetings but couldn’t. Others have complained about time restrictions on public testimony.

“In my district, they’re not at all pleased, and I can tell you that I’ve had dozens of calls from Albuquerque that aren’t at all pleased,” he said. “They think that’s the people’s house, and they ought to be able to come and go.”

Majors, the open-government advocate, said the whole year has been hard on everyone.

“They’re trying to do the right thing on behalf of the citizens of New Mexico,” she said, referring to members of the Legislature. “Will they succeed? We’ll have to wait and see. Is it a hard job? You bet.”