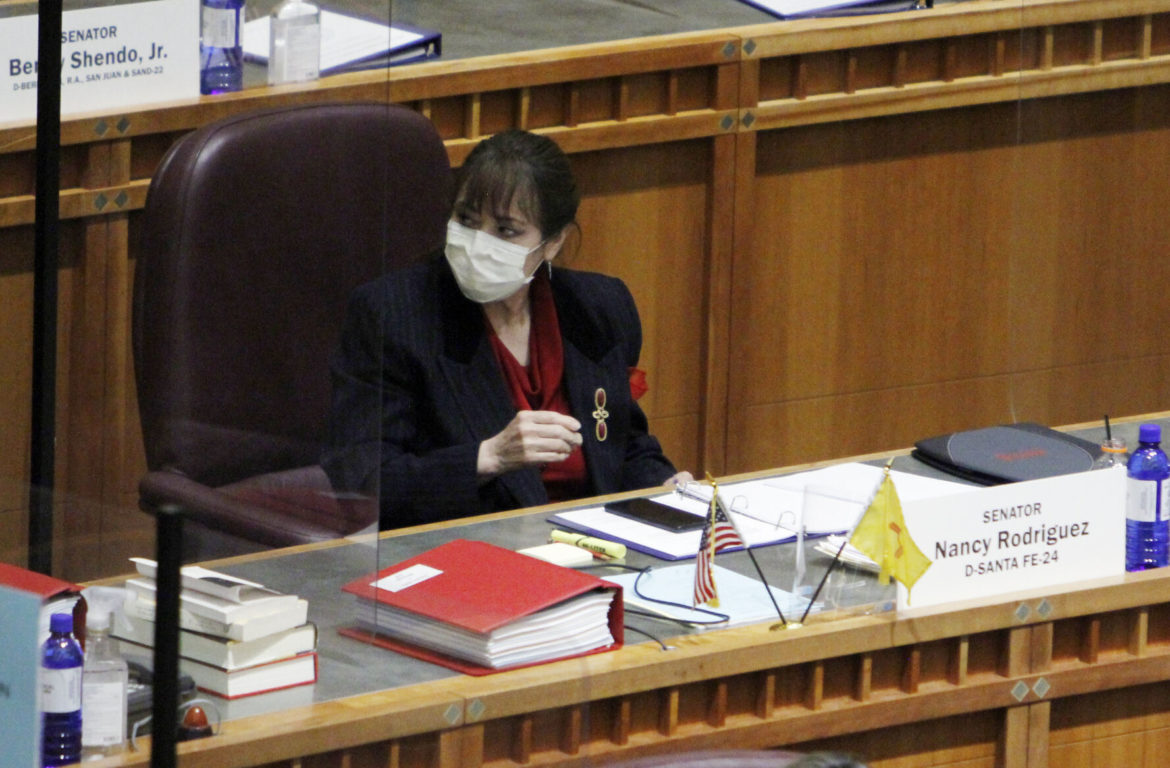 Sen. Nancy Rodriguez, D-Santa Fe, works Friday on the Senate floor. ‘We are moving fast, but we're also moving judiciously,’ said Rodriguez, vice chairwoman of the Senate Finance Committee. ‘We are looking at the fiscal impacts of bills more carefully than usual.’

To some degree, the two contrasting actions that played out late Friday morning spoke volumes about this year’s 60-day legislative session.

In the House of Representatives, members prepared to debate a contentious bill that would repeal a decades-old law making it a felony to perform an abortion.

Around the same time, in her Santa Fe home, Sen. Nancy Rodriguez, looked at a huge pile of mail from constituents and pondered what lawmakers in her chamber still need to do with fewer than 30 days remaining in session.

Later that day, as Rodriguez joined her colleagues on the Senate floor, the House voted to approve the abortion repeal measure, sending it to the governor’s desk.

One down, hundreds to go.

Much work remains at the Roundhouse — or in this largely virtual session, on computers in Santa Fe and around the state — as the session’s March 20 concluding date looms.

That leaves a lot of legislation competing for attention in the homestretch.

Several big-ticket items remain, including the legalization of the recreational use of cannabis, civil rights, tapping the Land Grant Permanent Fund for early education programs and reforming the state’s decades-old liquor license rules.

And then there’s the elephant in the room: the proposed $7 billion-plus budget, still weaving its way through committee hearings on the House side and, in the view of several lawmakers, running a little behind in the race against time.

“We are moving fast, but we’re also moving judiciously,” said Rodriguez, vice chairwoman of the powerful Senate Finance Committee. “We are looking at the fiscal impacts of bills more carefully than usual.”

A slew of pandemic relief bills — one is on its way to the governor — weighs on Rodriguez as the clock ticks away.

“If there is any time we should be passing relief bills for people, this is the year,” she said. “I foresee us prioritizing those bills.”

The difference between this session and those that came before is palpable and can’t be overstated. Gone are the lobbyists, analysts, political aides, members of the public and casual visitors wanting tours of the building.

You could roll a bowling ball through the Rotunda and not strike a soul.

Rodriguez, a Democrat, said she misses the community energy of the building, the interaction with constituents. The mail she sorts through every night is double what she usually gets — missives from people who want her to hear their voices as high-profile bills meander through the virtual world. In an email and online milieu, some don’t trust lawmakers are reading their mail, she said.

“I miss meeting, face to face, with members of the public,” she said. Working in a Zoom world, she said, is “making do with what we have.”

Ask another three senators how that setup is affecting the ability to get the job done and you get three different answers.

“I would say the entire Legislature is moving very slowly this year because we have so few floor sessions,” said Sen. Jerry Ortiz y Pino, D-Albuquerque. “My committee [Senate Health and Public Affairs] is moving much slower than in the past. Technology and other things are wearing.”

Sen. Bill O’Neill, D-Albuquerque, disagreed. “Pretty fast,” he said of the pace in his chamber. “Everything seems to be moving along.”

But not seeing the public, he noted, “is kinda weird.”

For Sen. Craig Brandt, R-Rio Rancho, it’s somewhere in between. “Things are moving along just perfect for me,” he said. “The process is a little slower.”

But he, like the other 111 members of the Legislature, is well aware that time is running out. “At some point, we’re gonna have to really prioritize what’s important for the state,” Brandt said. “Some bills will not be heard — but that happens every year.”

Majority Leader Peter Wirth, D-Santa Fe, said the Senate is expected to reconvene on the floor Wednesday and Thursday before taking a three-day weekend. But starting March 1, he said, the Senate likely will have daily floor sessions.

In the House, where rancor between Democrats and Republicans has dotted the first month of business, outnumbered GOP lawmakers complain their bills are not getting hearings and important matters such as reopening business and public schools are being neglected or ignored.

“I’m hopeful the last half of our session [is] more productive, that it results in our constituents being afforded opportunities to flourish, to embrace the businesses they have invested in,” said House Minority Leader Jim Townsend, R-Artesia.

However, some remain concerned about the pace of passing a budget. They include Gov. Michelle Lujan Grisham, who said she is “disappointed” it hasn’t quite come together yet.

Egolf and Rep. Patty Lundstrom, a Gallup Democrat who serves as chairwoman of the House Appropriations and Finance Committee, said they are working on getting the budget together and plan to have that legislation on the House floor for debate and a vote Wednesday.

Rodriguez said there’s still plenty of time to give the budget a full examination.

“We’ll see it soon, it’s coming across, we’ll be making tweaks and lining it up,” Wirth said. “In no way have we lost sight of that. That’s right on track where we want it to be.”

He said, however, that waiting to tackle the budget near the end of the session is not smart because of “a potential filibuster that could shut the whole process down.”