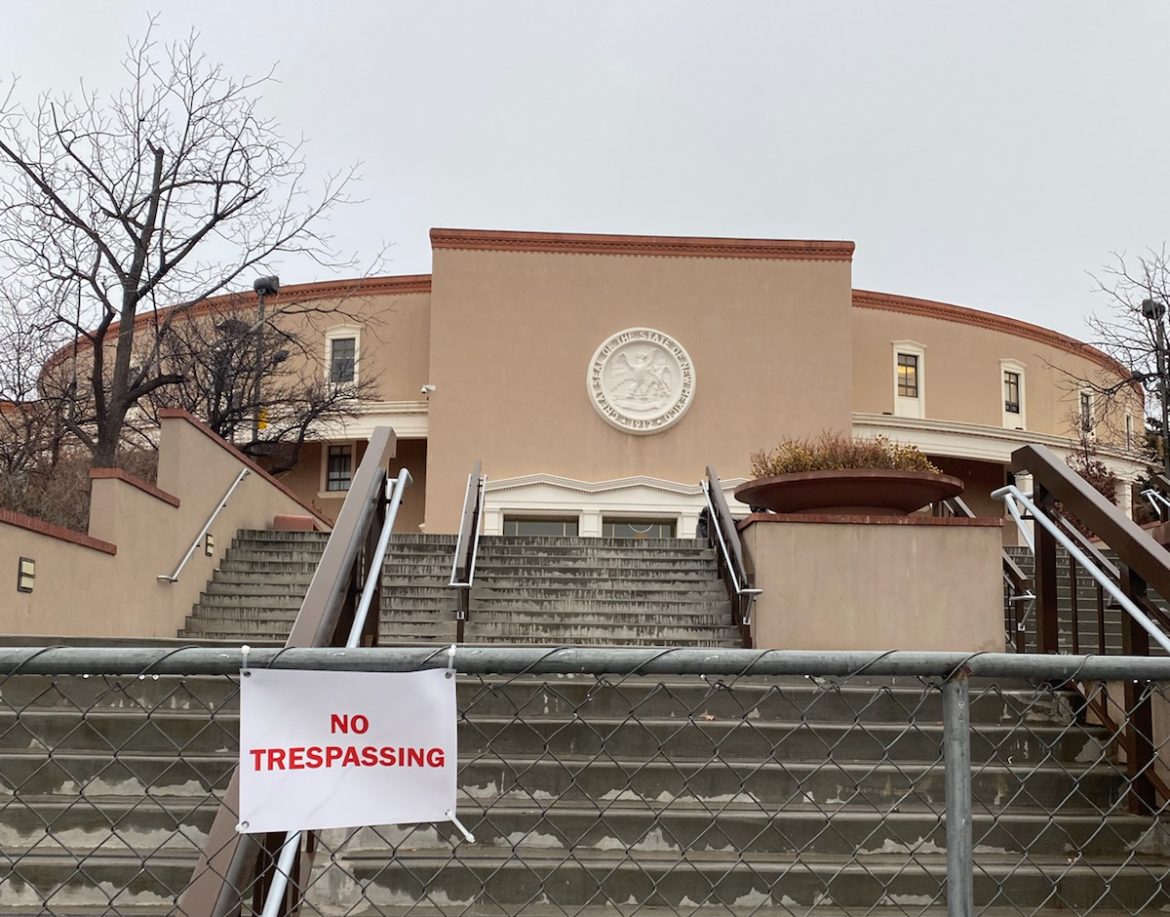 The state capital building with a fence surrounding it.

Republicans in the Legislature, contending “the threat has not materialized” against the Roundhouse in the seven weeks since protesters stormed the U.S. Capitol, asked the Legislative Council on Tuesday to remove the layers of protective barriers around the facility.

The council, an interim committee made up of legislators from both parties in the House of Representatives and Senate, voted early this year to direct the Legislative Council Service to pursue safety precautions before the session began. Chain-link fencing as well as some concrete barriers were installed to deter potential threats.

Republican lawmakers have argued such precautions are unnecessary and deter public participation and peaceful protests.

In a letter addressed Tuesday to Sen. Mimi Stewart, D-Albuquerque and president pro tem of the Senate, and House Speaker Brian Egolf, D-Santa Fe, six Republican leaders in the House and Senate wrote the fencing “creates the perception that our government leaders are afraid of the state’s citizens and there is a division between those who govern and the general public.”

The letter was signed by Republican Sens. Greg Baca of Belen, Mark Moores of Albuquerque and Craig Brandt of Rio Rancho and Reps. Jim Townsend of Artesia, Rod Montoya of Farmington and Rebecca Dow of Truth or Consequences.

Raúl Burciaga, director of the Legislative Council Service, said Tuesday afternoon he was reviewing the letter and planned to meet with Democratic leaders to talk about security and discuss the issue. A spokesman for House Democrats declined to comment.

The council usually does not meet during legislative sessions, which could slow efforts to garner its support for the proposal.

Since the session began Jan. 19, state police officers and members of the New Mexico National Guard have been patrolling the Capitol and checking the identification of those entering the building, which is closed to the general public because of the coronavirus pandemic.

Republicans who signed the letter said they are agreeable to maintaining that security presence but said it is “imperative” the fence come down immediately.

They said the security initiatives are costing up to $33,000 per day.

At the outset of the session, Burciaga told members of the House Appropriations and Revenue Committee the estimated cost of Capitol security personnel would be about $2 million — somewhere between $33,000 and $34,000 per day.

In an email, Nora Meyers Sackett, spokeswoman for Gov. Michelle Lujan Grisham, wrote the security measures for the building are a matter for the Legislature, though she noted those decisions “would certainly be subject to whatever threat analysis and intelligence law enforcement partners have conducted.”

In the weeks between the presidential election and the attack on the U.S. Capitol, supporters of then-President Donald Trump held several mostly peaceful demonstrations on the weekends, though some protesters were armed and there were occasional fights near the building.

The last day of the session is March 20.