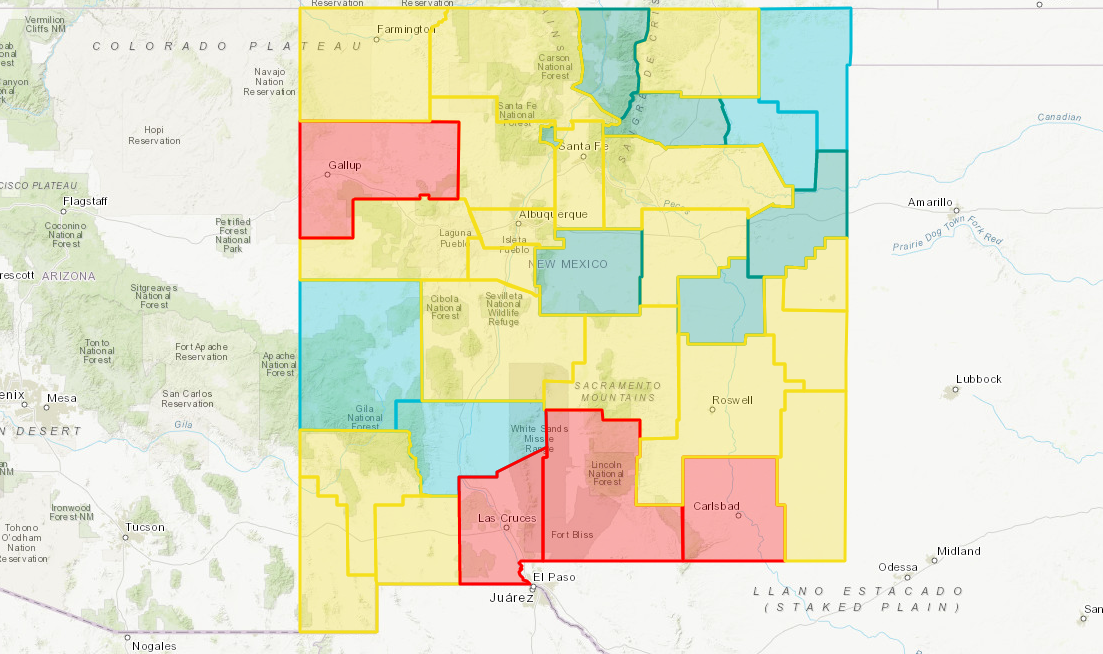 Screenshot of the state's red to green map as of the Feb. 24 update.

As part of the state’s ever-evolving COVID-19 restrictions, the state’s red-to-green, county-by-county reopening framework will add a “turquoise” level above green.

In addition, the state provided more modifications that would include the return of further expanded indoor businesses, like concert venues, movie theaters, performance venues and bars.

This all comes as the number of COVID-19 cases, hospitalizations and deaths decrease dramatically while the number of vaccinations continues to grow.

For a county to reach the turquoise level, it would need to remain at the green level (no more than 8 cases per 100,000 residents and a COVID-19 test positivity rate of 5 percent or lower) for two consecutive updates. The state updates the restrictions in each county every two weeks.

Among the state’s most populous counties, Santa Fe, San Juan, Sandoval and Bernalillo Counties were at yellow and Doña Ana was at red. Santa Fe narrowly missed the mark to reach green.

This means these counties will need at least another month to reach turquoise level.

But the state also announced changes at other levels, which are all outlined at the state’s red to green framework website.

“Large entertainment venues” like racetracks, concert venues, movie theaters, professional sports venues and more will be able to operate in counties that are not in the red level.

At the yellow level (in which the county reaches either the cases per capita or positivity rate criteria), they would be able to operate at 25 percent capacity in outdoor spaces, but with no operations indoors. Patrons would only be allowed indoors to use the restroom, while employees would be able to be indoors at the capacity needed to operate the outdoor portion.

At the green level, venues would be able to operate at 25 percent of maximum indoor capacity and 50 percent maximum capacity in outdoor spaces.

Places of lodging who have completed the state’s NM Safe Certified COVID-19 training would be able to operate with no occupancy limits at the turquoise level, 75 percent of capacity at the green level, 60 percent at the yellow level and 40 percent at the red level. Those that did not complete the training would be able to operate at lower occupancy limits in each level.