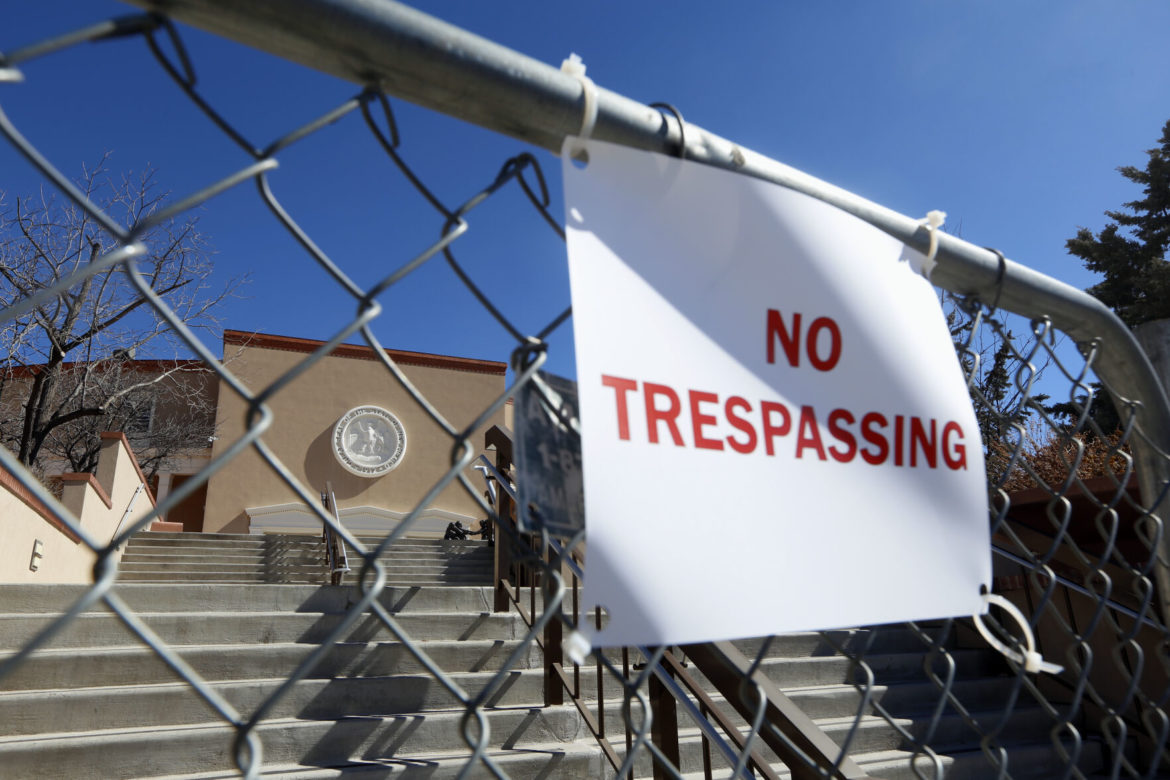 The fence around the state Capitol, shown Wednesday, will remain in place until at least March 20 — the end of the legislative session.

The fence around the state Capitol is staying put — for now.

But some Republicans are not happy with the decision, announced Wednesday by Legislative Council Service Director Raúl Burciaga.

Burciaga, who is in charge of operations at the building, said he met Tuesday night with state police officials, plus Democratic and Republican legislative leaders, to discuss whether the fence remains necessary.

“I recommended that the security fence remain in place through at least the end of session while options are being considered to ensure the safety and security of the Capitol occupants,” Burciaga said by phone.

He said state police officials agreed with him. As a result, the fence “will stay up probably until the end of the session [March 20] but at least until we feel the building is safe.”

House Minority Leader Jim Townsend, R-Artesia, one of the Republican lawmakers calling for the removal of the fence, said he is “disappointed we have to keep the fence up. It’s an eyesore that doesn’t speak well of our trust of New Mexicans.”

Sen. Mimi Stewart, D-Albuquerque, who also took part in Tuesday evening’s discussion, said she will be glad “when we can take the fence down. I don’t like the look of it.”

She added security experts want to keep the barrier in place while they work on other options.

“I’m not an expert in security,” Stewart said. “But there are reasons for us to continue with the security procedures we have now.”

The fence has become a point of contention between many Republicans and Democrats during this year’s 60-day legislative session. Republican lawmakers have argued such precautions are unnecessary and deter public participation and peaceful protests.

Democrats have countered the fence and other protective measures are necessary in the wake of the uprising at the U.S. Capitol on Jan. 6. The area near the Roundhouse had been the scene of mostly peaceful protests in the weeks after the November presidential election, though some were armed and occasional fights broke out.

Republican legislative leaders sent a letter Tuesday to leading Democrats asking the Legislative Council — an interim committee made up of leaders in both parties in the Senate and House of Representatives — to order the removal of the fence. Republicans contended any potential for threat has diminished, making it “imperative” the barrier come down as soon as possible.

Since the session began Jan. 19, state police officers and members of the New Mexico National Guard have been patrolling the Capitol and checking the identification of those entering the building, which is closed to the general public because of the coronavirus pandemic.

Some Republicans in both legislative bodies have complained the measures are overkill and members of the public are being kept out of the discussions on the many bills being discussed.

On the Senate floor Wednesday, Sen. Bill Sharer, R-Farmington, alluded to that concern when he claimed he sat in on one committee hearing in which only proponents of a bill were allowed to voice their opinions via Zoom. No opponents were given the chance to speak, he said.

“Let’s take down the damn fence and let people in here,” he said.

Townsend said he’d like to see members of the public at least allowed to get “up close” to the Capitol for peaceful protests, if nothing else.

He said 99 percent of protesters have been peaceful and shown respect to police officers and security officials at the Capitol.

“I’ll be happy when they’re back in it, personally,” he said of the public.