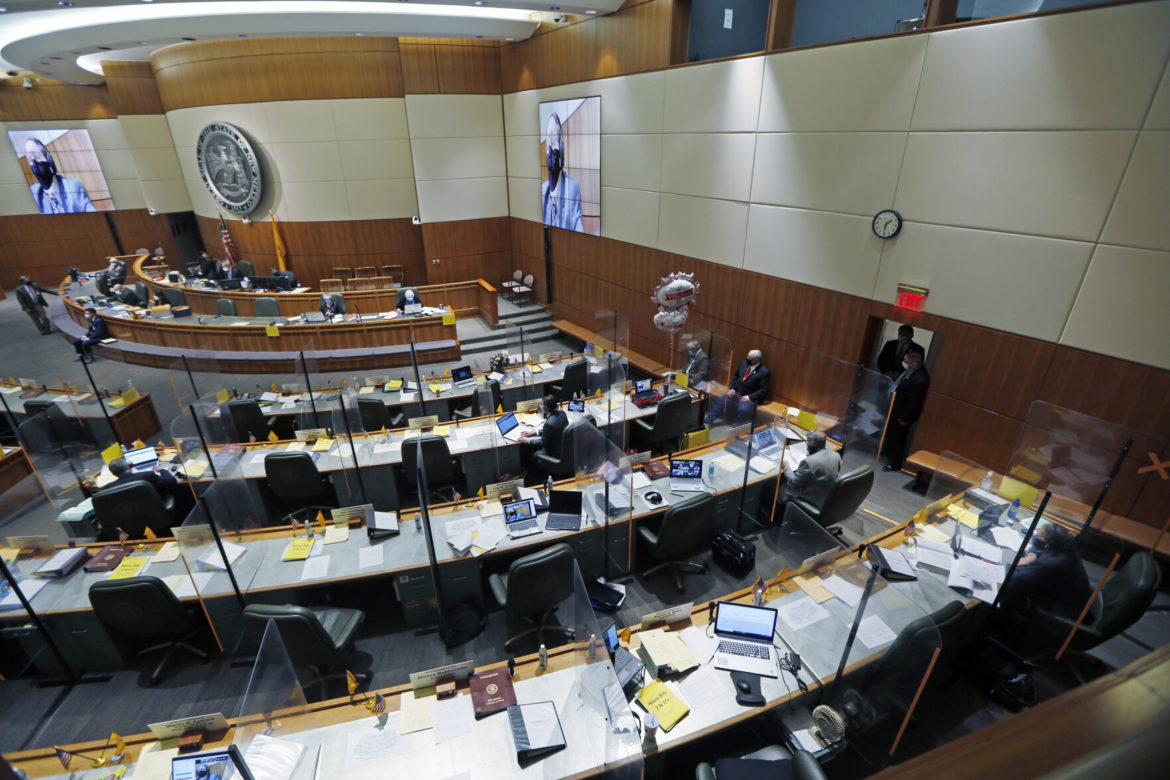 Rep. Randal S. Crowder, R-Clovis, bottom right and also on the big screens, speaks in favor of the budget bill, HB 2, during a floor session of the House on Wednesday.

The state House of Representatives approved what one lawmaker called a logical $7.39 billion spending plan for the upcoming fiscal year in a bipartisan 60-10 vote Wednesday.

“This is a very important piece of work that the New Mexico Legislature is involved with,” Rep. Patty Lundstrom, who chairs the House Appropriations and Finance Committee, said after a nearly two and a half-hour discussion and debate on the proposed budget. “Certainly, under our New Mexico Constitution, it’s our No. 1 responsibility.”

The proposed budget, which will be considered next by the Senate Finance Committee, represents a 4.6 percent increase in spending over the current fiscal year — a huge turnaround after initial revenue estimates had cast a dark cloud over state government last year amid the financial uncertainty stemming from the novel coronavirus pandemic.

The spending plan calls for a 5.5 percent increase in public education, or a total appropriation of $3.39 billion. That includes $110 million for two extended learning programs that would add an extra 25 days of teaching time for at-risk elementary schools and 10 days for all K-12 public schools.

“We know that having lost this last year of in-person learning time that making that up is going to be key for New Mexico’s children, our families and our future,” said Rep. Nathan Small, D-Las Cruces.

The proposal also includes about $64 million for a 1.5 percent cost-of-living adjustment for all state government, public school and higher education employees.

The spending plan increases the general fund appropriation for Medicaid by $64 million, which would support a temporary increase in enrollment of about 10 percent. The overall growth is tied to an increase in enrollment, as well as two additional quarters of funding of $75 million each from the federal government “that we hadn’t originally calculated,” said Lundstrom, D-Gallup.

The proposed budget takes into account several economic relief bills, as well as a plan to replenish the Unemployment Trust Fund, a move lauded by Rep. Susan Herrera, D-Embudo.

“I had many, many small businesses worried … that they would be left holding the bag on this pandemic,” she said. “That is a critical issue for small business.”

General fund reserves would be around 22 percent or 23 percent under the proposed budget.

“I would prefer to see it closer to 30 [percent] just with the volatility, but more than 20 percent is definitely a good place,” said Rep. Jason Harper, R-Albuquerque.

Lundstrom said earlier this week she probably put in at least eight hours a day, including weekends, to help develop the proposed budget.

“It’s very important for all of us to remember, this has all been done during a pandemic, and we can proudly say that we’ve completed our constitutional responsibility of preparing a state budget during one of the most trying times the state of New Mexico has ever faced,” she told lawmakers Wednesday. “The pandemic, as well as economic volatility, is the challenge for any budget makers. But we pushed through.”

Though the budget bill had bipartisan support, Republican lawmakers cast all 10 dissenting votes.

“The only good thing about this budget is that it is less bad than the previous two years, in which the governor wasted $2 billion in surplus funds,” House Minority Leader Jim Townsend, R-Artesia, said in a statement after the vote.

Townsend was among the Republican lawmakers who voted in support of the bill.

“If the minority leader does not support funding public education, early childhood education, higher education; creating workforce pathways; rebuilding statewide infrastructure; supporting job-creation programs all across the state; and protecting the public health and safety of New Mexicans, he should have enough courage in his conviction to simply say so, instead of making a pointless partisan swipe,” she wrote.