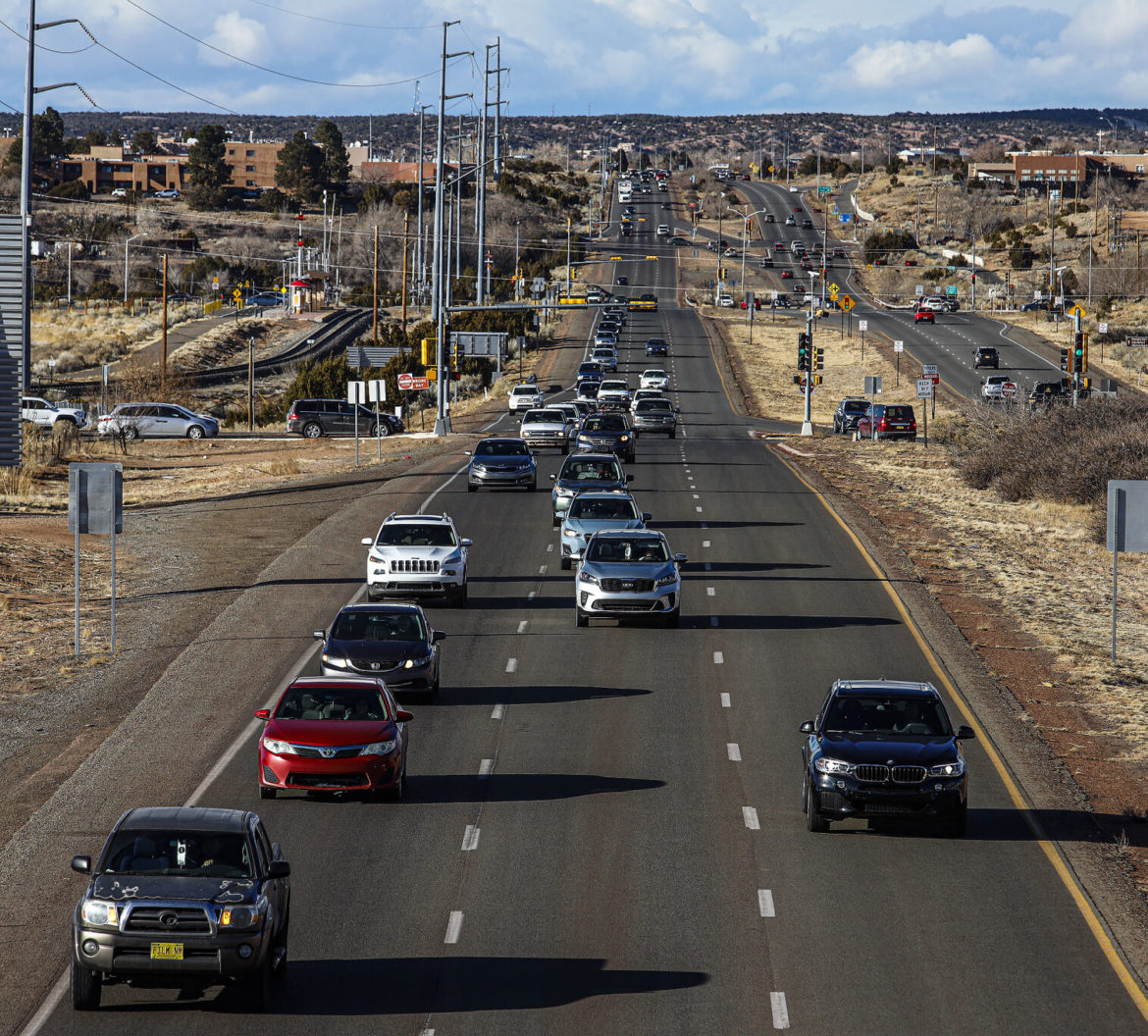 Cutline: Drivers in Santa Fe make their way down St. Francis Drive on Thursday afternoon. In the Santa Fe area, 34 percent of major locally and state-maintained roads are in poor condition, and another 18 percent are in mediocre condition, according to a new report.

New Mexico’s roadways are in terrible shape, and they’re costing the average driver $767 annually in additional vehicle operating costs, according to a new report.

But motorists don’t need to read a narrative to understand the condition of New Mexico’s interstates, highways and roads.

“All you have to do is hop in your vehicle and drive a couple of miles,” Sen. Michael Padilla, D-Albuquerque, said Thursday during a virtual news conference.

“Our roads at the moment are a complete disaster, and we do need to take it seriously,” added Padilla, vice chairman of the Senate Tax, Business and Transportation Committee.

The report by TRIP, a national transportation research nonprofit based in Washington, D.C., found 56 percent of major roads and highways in New Mexico are in poor or mediocre condition due to inadequate state and local funding.

In the Santa Fe area, 34 percent of major locally and state-maintained roads are in poor condition, and another 18 percent are in mediocre condition, according to the report.

“The health and future growth of New Mexico’s economy is riding on its transportation system,” the report states. “Each year, $123 billion in goods are shipped to and from sites in New Mexico, mostly by trucks. Increases in passenger and freight movement will place further burdens on the state’s already deteriorated and congested network of roads and bridges.”

The sobering findings come as lawmakers consider a bill that would increase the gasoline excise tax from 17 cents to 22 cents per gallon.

“We have some of the lowest gas taxes in the region, and they’ve been that way since the 1980s,” Padilla said. “As a result, we’re taking a serious look at what we do with gas tax because that is where this large chunk of money can come from.”

The last time New Mexico raised the gas tax was in 1993, when it was increased from 16 cents to 22 cents per gallon. The tax has been reduced twice since then to the current rate of 17 cents per gallon.

The measure lawmakers are considering this year also would increase the special fuel excise tax by 5 cents per gallon over five years, from 21 cents to 26 cents.

“The bill does not change the percentage distributions of either tax, therefore all gasoline and special fuel tax recipients will benefit from the increase,” according to a fiscal impact report on the measure. “The primary beneficiaries are state and local road funds.”

Rep. Rebecca Dow, R-Truth or Consequences, said people would be willing to pay a higher tax on their gas only if they were certain the money would go directly to improving and repairing roads.

“Assuring that that’s where those dollars go will be key in passing a gas tax if that is what happens,” said Dow, a member of the House Commerce and Economic Development Committee.

Dow said the state also has an opportunity to leverage federal dollars with a state match.

“We’re hearing that there [are] COVID relief and economic recovery dollars that are coming to the state in the tune of close to a billion dollars,” she said. “Jobs are created when we repair roads and through the construction process and through the commerce that’s allowed to occur. So, if we can dedicate some of those dollars and we can leverage those with private partnerships, we don’t have to pass all the burden off to the taxpayers and the folks who call New Mexico home.”

Asked about the likelihood of a gas tax increase passing during this year’s legislative session, Padilla said it’s “very good.”

“I think that the different composition of the Legislature at this point is going to lend itself to getting that through,” he said, adding the poor condition of the state’s roads may help propel the measure forward.

Before the coronavirus pandemic hit, New Mexico had some of the fastest-growing usage in the country, with an increase of 22 percent in travel on the state’s roads and highways, said Rocky Moretti, director of policy and research for the nonprofit that wrote the report.

While travel fell 41 percent across the state in April, “ultimately, we’ll see vehicle travel returning to previous levels,” he said.

At the same time travel is expected to continue to grow, Moretti said the state Department of Transportation reports it has $2.8 billion in critically needed transportation projects.

“These are projects to improve safety on the state’s transportation system, to relieve traffic congestion or expand mobility to help support economic development opportunities or to improve road and bridge conditions across the state,” he said. “But currently, they don’t have adequate funding for these needed projects to move forward.”

Investing in the state’s deteriorating transportation system will require more money that ultimately will come from the public, he said.

“Motorists in the state annually are paying $2.7 billion in the cost of driving on roads that are deteriorated, that are beating up their vehicles due to traffic congestion, which costs more time and wasted fuel — and then the economic cost of traffic crashes where the lack of adequate roadway safety features, while not the primary cause, are a contributing factor,” he said.

“The rate of traffic fatalities compared against the amount of travel in New Mexico is the third-highest rate in the country, so clearly a significant challenge in improving traffic safety,” Moretti said. “We know that when you make roadway safety improvements, they can result in significant improvements in safety.”

The report found, on average, 150 people die annually in the Albuquerque area in traffic crashes. In the Santa Fe area, the average is 29 fatalities annually.

“We can have a significant positive impact on safety,” Moretti said, “with the resources in place to make those improvements.”