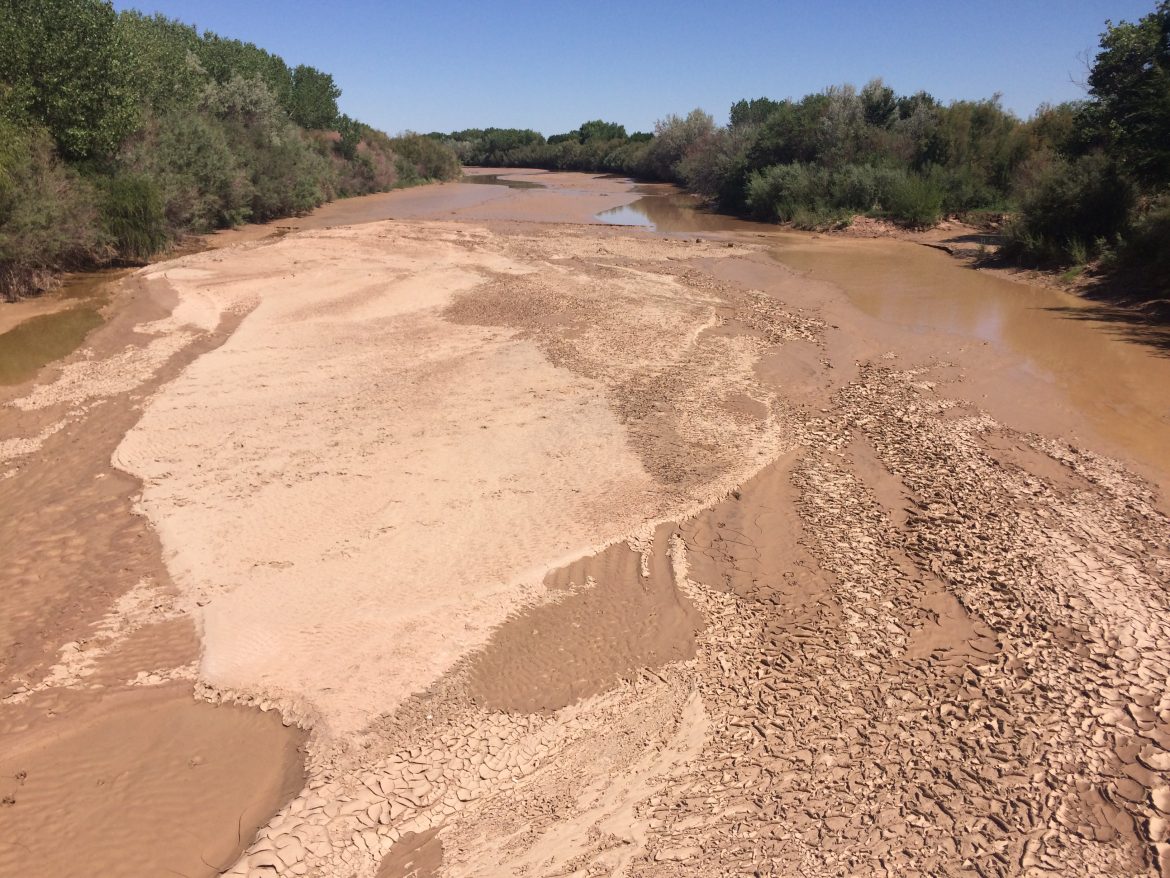 High above south-central New Mexico, satellite imagery shows a brown sea in arid Socorro County, broken up only by the Rio Grande, which splits the county and the state down the middle. Here in the northern reaches of the Chihuahuan Desert, it rains maybe 10 inches annually and the sun shines brightly 280 days a year.

Zoom in a little closer near a town called San Antonio and the scene remains barren. Seventy-six years ago the U.S. government decided to test its first nuclear bomb here at the Trinity Site, about an hour’s drive from downtown.

New Mexico’s yearly snowpack is trending down, along with overall precipitation, as the climate gets more trying for farmers.

However, alongside the Rio just south of town, patches of green break up the sandy dirt — farmland.

One of those farm sites is where Travis Harris has tended the land for most of his life. Now 55, he grew up farming here with his dad and grandpa. Today, Harris does the bulk of the work on 250 acres where he grows alfalfa and winter wheat. He also runs about 30 cows on another 75-acre plot of grass.

For irrigation, Harris gets about three acre feet of water for each acre of his land in a good year, his full allotment from the Middle Rio Grande Conservancy District. But water is growing ever scarcer in this part of the country. Available water is becoming costlier and worse in quality. In southern New Mexico, Chihuahuan grasslands, like those that cattle graze, are dying as the climate gets hotter and drier.

On the Rio Grande, one of the Southwest’s major lifelines, this year is expected to be among the driest in recent history. New Mexico officials project drought conditions to be worse than they’ve been since the 1970s. The upcoming season highlights a difficult reality in this state: Farming and ranching to pay the bills could become an unsustainable way of life in New Mexico, as the water supply dwindles and farms resort to pumping more groundwater to irrigate.

And while state lawmakers and regulators have a wealth of information on the current and future water crises, there has been little interest in radical changes to water policy.

In an attempt to address the immediate water challenges, hydrologists with the New Mexico Interstate Stream Commission are taking the rare step of asking farmers along the river, as well as a major tributary, the Rio Chama, to either cut back their farming this year or brace for a short irrigation season.

The state’s top crop, pecans, and its highest-grossing agricultural sectors, dairy and cattle, all command mass quantities of water.

“The outlook across the state is pretty bleak,” said Chad Smith, CEO of the New Mexico Farm and Livestock Bureau. “The impact will be felt from the job loss to the commodity markets. Farmers can ultimately be put out of business.”

State officials didn’t intend to give farmers the message that they can’t do their jobs this season, said Page Pegram, a hydrogeologist with the Stream Commission. Rather, she said, the directive was meant for the hobbyist ranchers, those who run cattle for enjoyment and tradition rather than their primary income.

“If they have an option to not farm, they should consider that option,” she said.

While the state may not have been targeting full-time farmers like Harris, its message still caught some off guard. “I thought, ‘What’re you talking about? This is how I put food on the table,’” Harris said.

It’s fairly common for farmers not to get their full water appropriations, which has caused some to grow less and, at worst, forced some out of the industry entirely.

Agriculture’s economic impact doesn’t even come close to the percentage of water resources it commands. It’s a $3 billion annual industry in New Mexico and it supports more than 23,000 jobs, according to the state. That accounts for some 3% or less of the GDP, though that amount varies each year.

There haven’t been any major legislative efforts to cap or reduce agriculture’s demand on the water, despite the fact that over 600,000 people live in New Mexico’s two largest cities.

While agriculture’s economic impact in New Mexico is usually just a few percent a year, it’s by far the largest consumer of water — irrigation accounted for 76% of water withdrawals in 2015, according to the latest available state engineer report.

New Mexico’s richest crop, pecans, as well as its highest-grossing agricultural sectors, dairy and cattle, all command mass quantities of water. For example, each cow can command up to 30 gallons of water every day, plus many more to irrigate the fields they graze. A single pecan tree needs up to 200 gallons of water daily in the warmer months.

The disparity between agriculture’s economic impact and water usage is common throughout the West, and Pegram said water law has perpetuated this trend.

“From a water rights law point of view, all beneficial uses are equal,” she said. “If you’ve been using water for 100 years, it doesn’t matter what you’re using it on — the law says that you have a right to continue to use that water.”

There haven’t been any major legislative efforts to cap or reduce agriculture’s demand on the water, despite the fact that over 600,000 people living in the state’s two largest cities, Albuquerque and Las Cruces, depend on water from the Rio Grande, too. Most New Mexicans live within the river basin.

If conditions this summer are as dire as predicted, Pegram said, some New Mexicans living in cities could face restrictions on their water use. However, Albuquerque, as well as Santa Fe, purchase water from the Colorado River Basin, she said, which could help stave off shortages in those cities.

Farmers in the Chihuahuan and high deserts are no strangers to raising crops with limited water. But it’s impossible for them to get their entitlements when the water just isn’t there.

“If we didn’t have that water, things would be even much worse,” Pegram said.

Historic heavy usage of Rio Grande water has left New Mexico in a particularly difficult position ahead of the impending drought.

Right now, Pegram said, the state is unable to store any more water from the river due to restrictions under the Rio Grande Compact, which governs water apportioning among Colorado, New Mexico and Texas.

Even if the state got out of those restrictions, she said, it owes a debt of 100,000 acre feet of water — enough to flood about that many football fields a foot deep — downstream to Texas. Climatic trends don’t bode well for New Mexico.

“If we don’t get some above average years, it’s going to get harder and harder to dig ourselves out,” Pegram said. “We’re kind of in a circular pattern here in that streamflow and snowpack has been lower than average for 20 years now.”

Farmers in the Chihuahuan and high deserts of New Mexico are no strangers to raising crops with limited water.

“We’ve had to grow more with less for a long time now,” Smith said. “When you are only delivered so much water, you have to make tough decisions about what to grow and what not to grow.”

But even when farmers own water rights, it’s impossible for them to get their entitlements when the water just isn’t there.

Harris is all too familiar with this. He said he didn’t get his full water allotment in 2020. Last fall, he said, his water got shut off a month early. He keeps a close eye on the conditions high in the mountains, too, knowing how deeply they affect him.

“There’s no snowpack. There’s no water in storage up north,” Harris said. “It’s very scary going into this season.”

February snowstorms offered some hope for this year’s Rio Grande levels to be better than projected earlier in the year, but long-term trends are far gloomier. Yearly snowpack is trending down, along with overall precipitation, as the climate gets more trying for farmers.

Still, Harris tries to be optimistic, relying on his faith for a better vision of the future. His son recently moved back home, and Harris wants to pass the farm down to his kin, just like his own dad had done.

“I’m a man of faith,” he said, “and I believe that God provides for us, and that’s how we continue to keep pushing forward.”