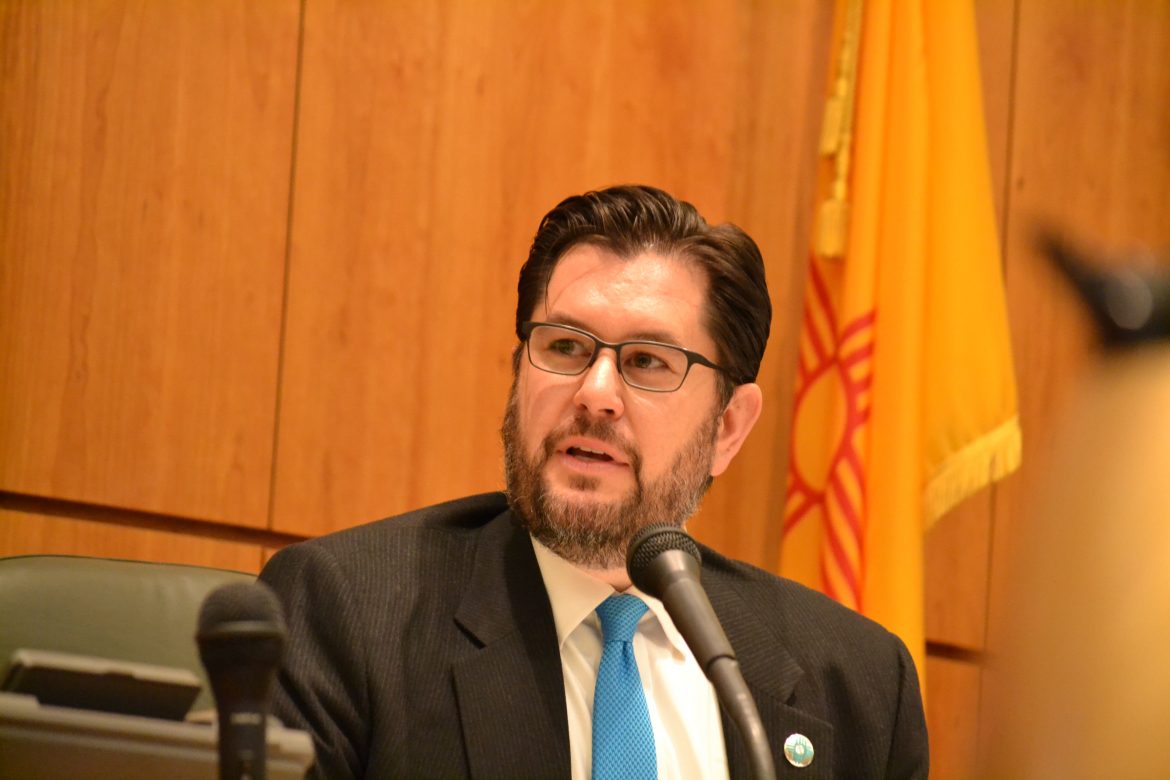 Speaker of the House Brian Egolf

The New Mexico State Ethics Commission will “likely” dismiss two of three complaints filed by a retired judge against House Speaker Brian Egolf, according to a letter the commission sent to the complainant Friday.

But the third charge — that Egolf failed to communicate a potential conflict of interest — is still under review by the commission, according to the letter, signed by Jeremy D. Farris, the ethics commission’s executive director.

The third complaint will be sent to the ethics commission’s general counsel for review. But, Farris wrote, the commission has no jurisdiction over the other two charges — that Egolf used his legislative office for personal gain and that he failed to discharge his legislative duties in an ethical manner.

As a result, he wrote, those two complaints will probably be dismissed during the commission’s next meeting in April.

The legislation would allow people to file complaints in state District Court over government violations of the state Bill of Rights. Currently, such cases are filed in federal court and cite violations of the U.S. Constitution.

Price claimed Egolf, an attorney, should have disclosed civil rights cases are among those his Santa Fe firm handles.

Egolf has denied any wrongdoing, and his attorney, Andrew Schultz, has asked the ethics commission to dismiss the charge.

In his letter to Price, Farris said the commission had no jurisdiction over the other complaints because of a provision in the New Mexico Constitution that says legislators cannot be questioned outside the Roundhouse for “any speech or debate or for any vote” they cast.

As such, it provides legislators a level of immunity from administrative, civil and even criminal charges for their legislative actions. He cites similar language in federal statutes regarding members of Congress to back up his opinion.

The “any other places” clause, Farris writes, includes the State Ethics Commission.

Speaking by phone Friday, Price said that interpretation means those lawmakers can “fail to disclose conflicts. You can pass legislation that might impact your financial gain. You can vote on bills that may lead to financial gain for you or others in your group. Or you can, if in debate, misinform or even lie about information.”

If that were the case, he said, “think of what the legislative session would be like. Every single committee hearing wouldn’t be filled with testimony from concerned citizens. It would not be filled with experts testifying. The entire meeting would be taken up with every single legislator standing up and saying, ‘Here are the 87 conceivable ways I may be benefited from this possible legislation.’ “

It wouldn’t stop there, he said. That same action would play out on every floor session of the House and the Senate.

“That’s no way to run a Legislature,” he said.

Still, Farris wrote in his letter that a lawmaker “keeping quiet about a financial interest” is not a legislative act. He said it may be exempt from state and federal guidelines on the issue, which is why the commission referred the complaint to its general counsel.

Of the remaining complaint, Schultz said, “We continue to feel very confident that when they review the merits of our motion in regards to the remaining claim, it will be dismissed.”

Price said she is “pleased” the commission is still looking into one of her claims and glad the letter did not define her complaint as frivolous or lacking merit.

But she said she finds a sad irony in the situation.

“What I find maddening,” she said, “is that here they are pushing House Bill 4, which takes away any kind of immunity for the backbones of our community — teachers, social workers, firefighters, county commissioners, school counselors, law enforcement, huge groups of government workers who would have no claim of qualified immunity — and here the Legislature has absolute immunity.”