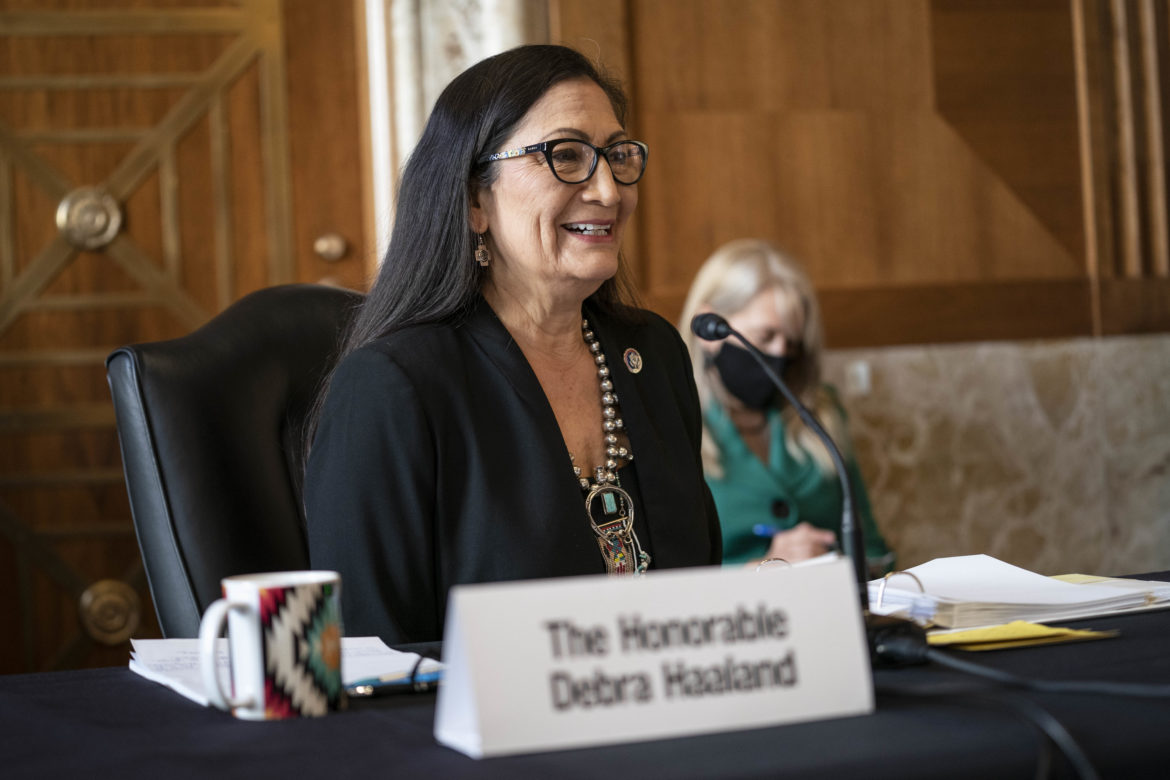 WASHINGTON, DC - FEBRUARY 24: Rep. Deb Haaland (D-NM), nominee for Secretary of the Interior, testifies at her confirmation hearing before the Senate Energy and Natural Resources Committee February 24, 2021 on Capitol Hill in Washington, DC.

The U.S. Senate voted to confirm Deb Haaland as Secretary of the Interior on a 51-40 vote Monday afternoon.

With the vote, Haaland, an enrolled member of the Laguna Pueblo, became the first Native American cabinet-level official in U.S. history and put her in charge of a sprawling department with key interactions with sovereign tribal governments. The Interior Department is the parent agency of the Bureau of Indian Affairs.

“Thank you to the U.S. Senate for your confirmation vote today,” Haaland said on Twitter after the vote. “As Secretary of @Interior, I look forward to collaborating with all of you. I am ready to serve.”

All 50 Democrats voted in favor of Haaland’s nomination.

“It creates a government that more embodies the full richness and diversity of this country,” Schumer said. “We know for so long, the Native American community was treated badly. And we have a long way to go.”

New Mexico U.S. Sen. Ben Ray Luján presided over the Senate when the vote took place and just before the vote, gave a short speech where he praised Haaland.

“As a Pueblo woman and 35th generation New Mexican, Deb Haaland has a long-overdue perspective to contribute to the Department of Interior’s mission of protecting our natural resources and public lands and honoring America’s trust responsibilities to tribal nations,” Luján said.

The Interior Department is also responsible for the management and protection of a large swath of public lands in the country, especially in the Western United States.

It was the Interior Department’s role on oil and gas exploration that prompted the most criticism from Republicans. Haaland has expressed support for the Green New Deal, a set of guidelines that—among other things—would move the country to a future with more renewable energy.

During her confirmation hearing, Haaland said that she would support Biden’s energy policies.

Two Republicans, Steve Daines of Montana and Cynthia Lummis of Wyoming, placed a hold on Haaland’s nomination, which delayed the confirmation vote.

But Haaland received the support of four Republicans. Confirmations are not subject to the Senate’s filibuster and only require a majority vote from the chamber to pass. If only 50 Senators voted for a confirmation, Vice President Kamala Harris would be able to break the tie.

Haaland won two elections in the 1st Congressional District. The opening in the seat will now be filled through a special election. Democrats have won seven consecutive elections in the district, which previously had only been held by Republicans.

Luján said that Haaland’s life experience would inform her tenure as Interior Secretary.

“Of all the qualifications and accomplishments that Deb Haaland will bring to the Department of Interior, there’s one that stands out to those who know her best: her empathy,” Luján said. “Deb’s experience as a single mother struggling to keep a roof over her family’s head allows her to connect with her compassion to her constituents and informs every aspect of her work.”

“I am confident that soon-to-be Secretary Haaland will use the best available science to restore our landscapes, open up new outdoor recreation opportunities for everyone, put our public lands to work in confronting the climate crisis, and help Indian Country recover and rebuild from the COVID-19 pandemic,” Heinrich said in a statement. “She will be a true partner for Western states like New Mexico as we diversify our economy, invest in our communities, and remain a global leader in producing and exporting energy.”

Haaland is not the first New Mexican to serve in the position. In fact, she isn’t even the first member of Congress from the First Congressional District. Former congressman Manuel Lujan Jr. (of no close relation to either Ben Ray Luján or Gov. Michelle Lujan Grisham) served as Interior Secretary under George H.W. Bush from 1989 to 1993 after two decades in Congress.

Lujan Grisham called it “a proud and historic day for indigenous peoples everywhere, for New Mexico and for the United States of America.”

Environmental groups praised the decision, while Republicans and others criticized her confirmation.

Republican Party of New Mexico chairman Steve Pearce called it a “bittersweet moment” in a statement.

“While Rep. Haaland’s elevation to the Biden Cabinet is a proud moment for our state, her radical position on energy will be devastating to New Mexico,” he said.

“This is a historic moment for New Mexicans and for Native communities across the nation,” said party chair Marg Elliston. “We’re thrilled to see a strong New Mexican leader like Representative Haaland break down barriers and make history on the national stage.”

Schumer said it would be a big change for the direction of the country.

“She represents a turnaround because the Trump administration did more to undermine the relationship between the federal government and tribes than had been done in a long time,” Schumer said. “Deb Haaland will reverse that and move much further along.”