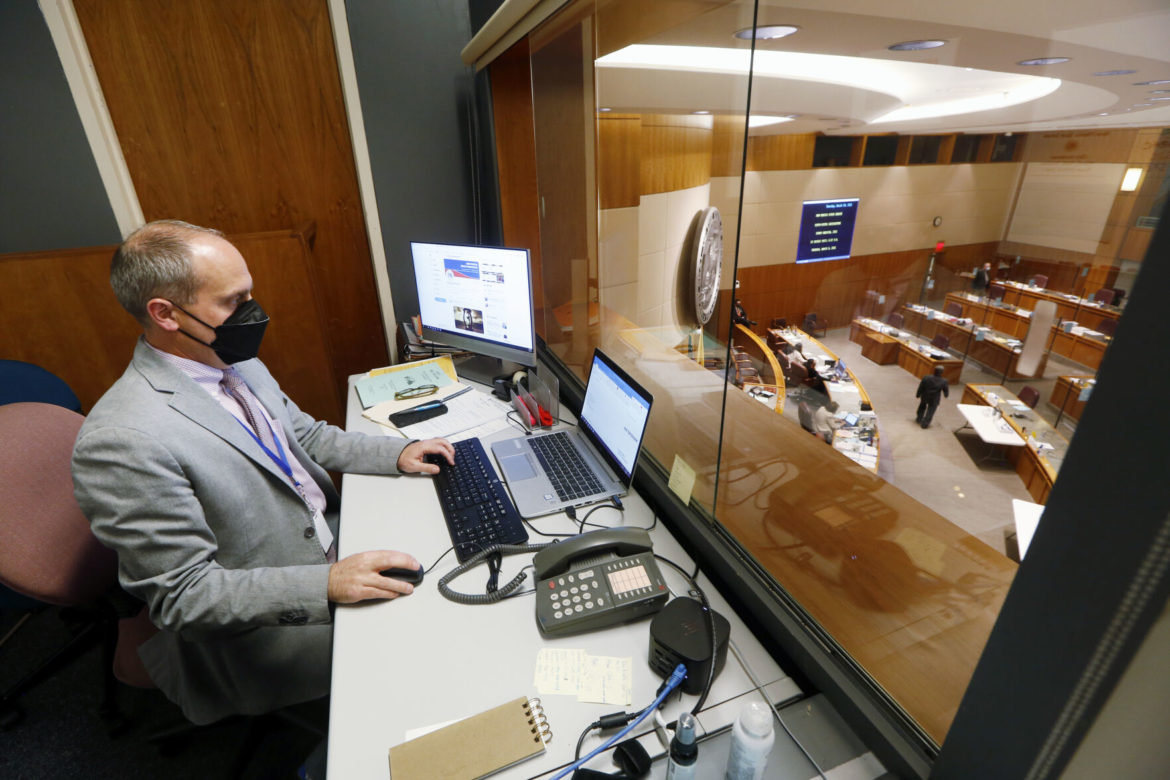 Chris Nordstrum, the Senate Democrats' communications director, works Tuesday in his office at the State Capitol. 'I really do see my job as to provide that conduit to everyone in the media to get everything they need,' he says.

Chris Nordstrum was in third or fourth grade when he was called to the Governor’s Office for the first time.

He wasn’t in trouble. He had won a school poster contest through the Secretary of State’s Office and went to the Roundhouse to claim his award.

“I remember being in complete awe of this place and the grandeur of that office,” said Nordstrum, a 50-year-old Santa Fe native who serves as communications director for the New Mexico Senate Democrats.

His office is located behind a nondescript door off one of the main hallways on the ground floor of the Capitol. A long window panel allows him to look down at the Senate floor while a couple of computer screens give him access to Senate committee hearings.

You may see him walking through the building, but he does not have the high-profile physical presence of a lawmaker. He — like his counterpart in the Senate Republican caucus — is one of those people who helps drive the inner engine of the machine known as the state Legislature.

As communication directors, their jobs go beyond just coordinating interviews with the press and making sure websites are updated and brimming with fresh news about legislative successes.

They are messengers who have a story to tell.

Nordstrum’s background includes 20 years in marketing and advertising for Cisco Systems in the San Francisco Bay Area and some work in linguistics, which is what he majored in at Pomona College. He didn’t have any experience in media relations when he took the legislative job four years ago. But after interviewing for the position with Senate Majority Leader Peter Wirth, D-Santa Fe, something told Nordstrum it was going to be a good fit.

A lifelong registered Democrat, Nordstrum didn’t consider himself political — although he always paid attention to New Mexico politics, even when he lived in California. “Being raised with the same values held by the [Democratic] Party definitely played a part in me wanting to serve in this organization and in this capacity,” he said. Wirth, he said, sets a “forthright tone” that in turn defines how Nordstrum conducts his work.

“I’m here to represent the caucus,” Nordstrum said during a recent masked interview in one of the hallways of the Capitol. “But they’re really on their own for most of the year in terms of staffing and communication. I really do see my job as to provide that conduit to everyone in the media to get everything they need.”

He works with a staff of two — both of whom are working remotely during the pandemic — and gets out the caucus’s message via a number of social media platforms including Twitter and Facebook.

That message is straightforward, to-the-point, almost Jack Webb-like in its “just the facts” presentation —  a reflection, perhaps, of Nordstrum’s calm, laid-back demeanor. “I’m not a big fan of the ugly side of politics,” he said.

“The less ugly you make it, the more everybody can relate to and understand what you are doing without looking like it’s partisan,” he said.

But he admits it’s easier to take that route when you are representing the majority party. Democrats outnumber Republicans 27-15 in the 42-member Senate.

On the flip-side of that equation, Joaquin Romero, 22, communications director for Senate Republicans, also has a personal relationship with the Roundhouse. As a high school teen participating in the New Mexico Youth and Government program, he found himself sitting in a chair on the Senate floor debating issues and learning about the difference political leaders can make.

He still recalls one of those mock bills being about prohibiting discrimination against high school students for their hair or headdress styles — an issue that became a legislative reality this year as Democratic sponsors of bills to support that measure work their way toward the finish line.

He met his wife in that program. She’s a Democrat and a U.S. Army veteran. They just had a baby, born Jan. 25, shortly after this year’s session began.

“Usually, the session is a no-sleep situation, but having a new baby as well … there’s really no sleep,” he said during a masked interview in one of the media rooms in the Roundhouse.

The Albuquerque native’s father worked as a budget officer for the city of Albuquerque for years. As a result, the younger Romero accompanied his father to City Council meetings. He wasn’t bored.

“That’s where I cut my teeth in politics,” he recalled. “I got a real taste of what it’s like to be in government. I learned about the things people care about — potholes in the street, construction, crime, obviously. A lot of that happens on the local level, and I was always mystified that more people were not paying attention.”

His parents are Republicans, and he shares their political values. It’s OK that his wife, Sofia Hoskins, is a Democrat. It helps him relate to what happens in the Legislature during the session.

“We can have disagreements and find out we care about some of the same [things],” he said of his relationship with his wife. “We may not have voted for the same people, we might not always agree on how to get to the future we want for our daughter, but we do want the same things for her — better schools, less crime, more economic growth. We want less job loss, less brain drain in the state.

“How we get there is sometimes different, but a lot of times we agree, and that’s not unlike what goes on in this building.”

Still, Romero’s job representing the minority in the Senate is targeted toward one message: Letting people know that Senate Republicans stand for certain issues, that they will make their voices heard even if they are outnumbered and that there is a reason to support them come election time.

He said Senate Minority Leader Greg Baca, R-Belen, made it clear during their interview that a more concentrated media effort was needed to “define ourselves as Republicans in the Senate,” Romero said. They don’t want to be “overlooked, forgotten or just seen as a minority party.”

“I think for too long the tone had been set that Republicans — although bipartisanship is an important part of what happens in the Senate — were very amenable to the whims of the Democrat majority. I don’t think voters in the last election fully understood why they should support Republican candidates over Democrat candidates when there was no defining message of what a Republican majority or increased vote share would mean for the state.”

And so, Romero’s email blasts and social media posts play up the differences between the two parties and showcase Republican victories, even those of a bipartisan nature, and express dismay or disappointment at Democratic success stories that go against the Republican grain.

If Nordstrum’s releases are “here’s what happened” reports with quotes about those legislative successes from Democrats — such as one promoting the Senate’s passage of a statewide broadband expansion and analysis act — Romero’s give Republican senators a voice on almost every point they take issue with, like the one from Republican Senate leaders lamenting the one-year anniversary of COVID-19 in the state.

“In retrospect, it is now clear that the governor kept our state under her thumb until it was no longer politically expedient to do so,” according to that release, attributed to Republican leadership in the Senate. “She executed, renewed, and expanded public health orders unilaterally with no input from the Legislature or the people of our state. While she interviewed for a job in the Biden cabinet, gave her staff five-figure raises, and lived lavishly on the taxpayer dime, our students, small business owners, and hardworking New Mexicans suffered.”

Yet Romero says that while some may see politics as a “dirty business,” it is important for Republicans to work with Democrats, and vice versa, to “navigate getting our priorities through because we see it is what is best for New Mexico. But maintaining a working relationship with the other side of the aisle is an amazing experience.”

One of the best parts of the job, he said, is “learning that real work can be done in this state that doesn’t have to be the roadblock that Congress is, that we can work for a better New Mexico in this chamber.” He said Democratic senators often come into Republican offices to talk policies, politics and life.

Both Nordstrum and Romero think the best part of their jobs is the ever-changing nature of the session, where bills, issues and unexpected breaking news items flow through the event like a raging river, making them adapt to new challenges. Both likened it to being back in school, being tested and learning new things.

But Nordstrum, now working his fourth session, has more of a veteran’s perspective on the biggest challenge facing them, lawmakers and the public at large.

“The super-duper, highly concentrated nature of the session really impedes the state’s ability to move forward and make progress,” Nordstrum said. “It takes longer. It makes my job difficult. It makes everybody’s job difficult, I guess.

“It leaves a lot of frustration both from the citizens and the legislators. It seems like hardly anything gets done. You introduce bills thinking nothing will be done with them — but it could take three, four, five years for them to get anywhere. That’s the nature of our session.”