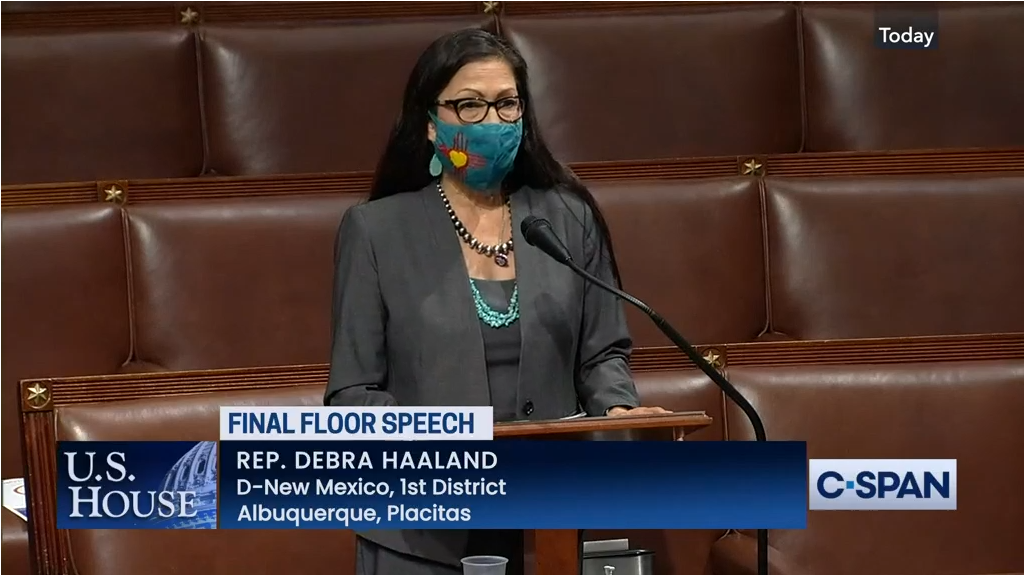 Deb Haaland delivered her final speech in Congress on Tuesday.

Haaland resigned from her congressional seat a day after her confirmation as Secretary of the Department of the Interior.

“I thought I would have more time here, but we are called to service in different ways. Though I’m excited to become the first Native American cabinet secretary in history,” she said. “I’m also sad to leave this chamber.”

She won her second reelection in the 1st Congressional District last November, then President Joe Biden picked her to head the Secretary of the Interior. Haaland is the first cabinet-level secretary at the federal level.

In her farewell speech, Haaland praised her colleagues and reflected on her time in Congress.

“I’m humbled to have spent the last two years in this chamber, where I proudly served New Mexico alongside my colleagues, past and present in the New Mexico delegation,” she said. “I’m thankful to senators Martin Heinrich and Ben Ray Lujan, in particular, for helping to build support for my confirmation, and to former Senator Tom Udall, for his years of friendship and mentorship.”

Haaland also reflected on her life experiences and her heritage, as an enrolled member of the Laguna Pueblo, that brought her to where she is now.

“Growing up, Native women rarely held federal leadership positions,” Haaland said. “And now little girls everywhere will know that they can run for Congress and win, and that this country holds promise for everyone.”

Haaland was one of the first two Native American women to be elected to Congress, along with fellow Democrat Sharice Davids of Kansas, in 2018.

She mentioned several pieces of legislation that she sponsored that became law, largely as parts of larger omnibus bills as most legislation is passed in modern times, including the Not Invisible Act, the Progress for Indian Tribes Act and more.

Haaland also thanked her staff, both in Albuquerque and in Washington D.C., as well as congressional staff.

Haaland’s replacement will be chosen in a special election later this year. Secretary of State Maggie Toulouse Oliver will announce an election date within ten days to start the process.