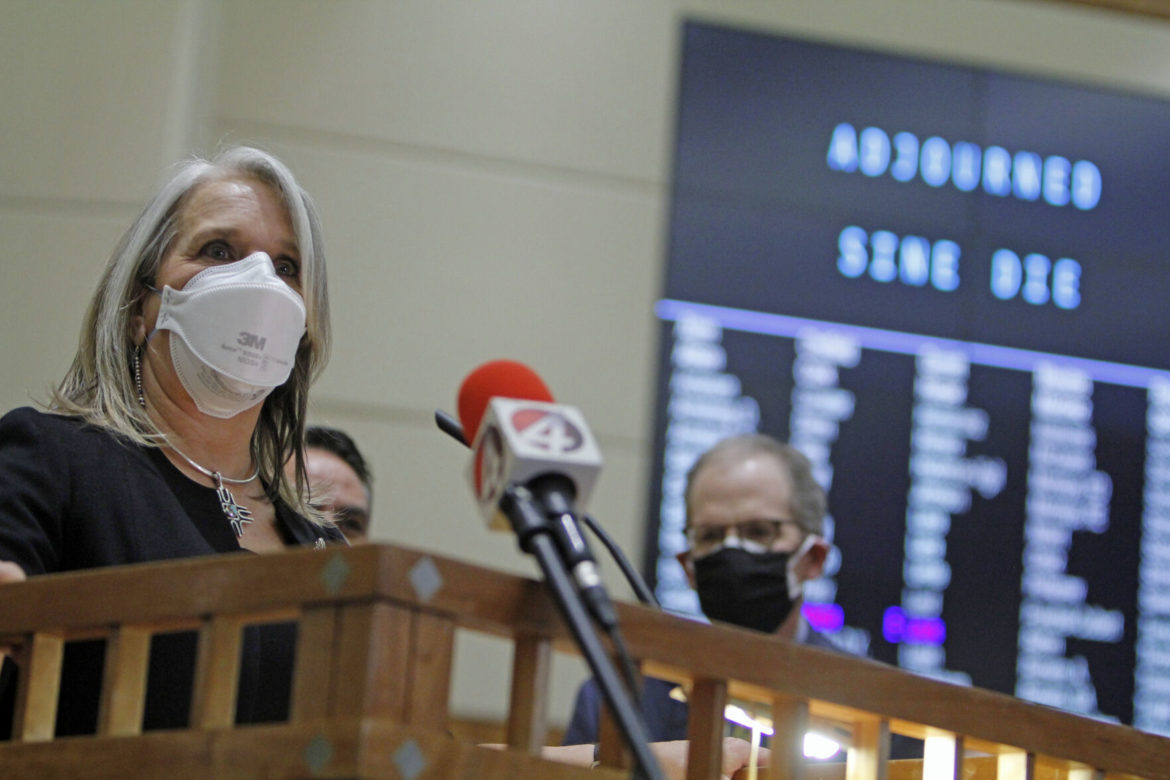 Gov. Michelle Lujan Grisham announces during a news conference Saturday that there will be a special session to vote on the cannabis bill.

New Mexico’s 2021 legislative session had ended only about an hour before the governor said she plans to bring lawmakers back to the Capitol in coming days.

Talk of a special session to wrap up a cannabis bill — a high priority for Gov. Michelle Lujan Grisham and many Democratic lawmakers — was just the pinnacle of a dramatic end to a legislative session like no other amid the coronavirus pandemic.

There was last-minute maneuvering by House Republicans to jam up Democrats’ bills, allegations of bullying in the Senate and complaints of power players obstructing bills in the final days and hours of a session held mostly via online Zoom meetings, with a security fence around a Capitol surrounded by New Mexico State Police officers and National Guard members.

The building was closed to the public during the 60-day session due the pandemic and concerns of violent protests in the wake of the Jan. 6 attacks on the U.S. Capitol. Those who were allowed inside — lawmakers, members of the media and staff — lined up at least once a week for COVID-19 tests.

There were calls by Republicans to tear down the fence.

There were COVID-19 infections. At least one unnamed GOP lawmaker was among those in the Capitol who contracted the virus.

There were other surprises, too, as lawmakers tried to conduct business as usual in a sometimes tense cybersession that was anything but usual:

“I hope we never have another session like this in anyone’s lifetime,” Lujan Grisham said in a news conference Saturday after the clock ran out on the session.

Several high-profile issues — legalizing adult use of cannabis, creating an independent redistricting commission, letting voters decide if the state can draw money from a multibillion-dollar investment fund for prekindergarten programs — moved forward slowly, raising questions about whether they would cross the finish line by Saturday’s deadline.

Amid the last-minute drama, Republican House members, far outnumbered by Democrats and unhappy with legislation they could not stop with votes, turned to a delaying tactic Friday.

They began debating every measure for three hours — the chamber’s limit.

“One of the issues that you have in the process of the Legislature is the consumption of time,” said House Minority Leader Jim Townsend, an Artesia Republican, after the session ended Saturday. “And in the minority, sometimes we have to utilize it.”

Egolf announced late Friday the House would work through the night, with a short recess, to get as many bills approved as possible as debates dragged on.

And then at one point, lawmakers began hustling bills through the chamber — with no debate and few “no” votes.

Townsend said House Democrats and Republicans had brokered a deal — a “gentleman’s agreement,” as he put it — to move a slew of bills forward quickly. He said the arrangement hinged on an agreement that if the GOP had issues with one particular piece of legislation, “we would respect each other’s opinion and work forward.”

Egolf confirmed at a news conference Saturday that a bill creating a path toward redistricting was “at the core” of the deal worked out behind the scenes. He said it was a “shared priority” of both parties.

Redistricting, designed to ensure the number of people in each voting district remains fairly equal as populations shift, is required in every state once a decade, based on national census data. The process is often controversial because voting districts can be redrawn to benefit the political party in power.

The measure approved by House members early Saturday — a combination of proposals — creates an independent commission to draw possible district maps for legislative and congressional seats.

Kathleen Burke, project director of Fair Districts for New Mexico, an Albuquerque advocacy group, said she was “jubilant” about how the issue worked out. She tried to stay awake late Friday night and into Saturday morning to see what would happen with the measure. She fell asleep twice, she said, but caught the roughly 10-minute debate on the bill around 12:15 a.m. The House gave the legislation a unanimous “do pass.”

“It was very much a surprise,” Burke said Saturday afternoon. “The way in which it came together, the amendments that were made were a surprise to our team altogether.”

Friday wasn’t the only late night for legislators last week. On Saturday, many showed signs of fatigue.

Moments after mixing up two senators’ names during a floor session, Lt. Gov. Howie Morales, the Senate president, made a procedural error, calling on a bill reader instead of Majority Leader Peter Wirth.

“It’s Day 60, Senator,” Morales told the Santa Fe Democrat. “Hopefully, you can give me just a little bit of slack.”

Wirth turned to Sen. Craig Brandt, a Rio Rancho Republican who had requested a full reading of the 222-page state budget bill last week. “I thought Sen. Brandt had another issue for the reader to read, so I was a little worried there,” Wirth joked.

As the minute hand on the clock approached noon, many lawmakers began to put aside their political differences. They praised one another and vowed to continue working together.

Rep. Sheryl Williams Stapleton, D-Albuquerque, spoke about their commonalities in a culminating speech and prayer in the House.

“God does not see us as Republicans and Democrats,” she said.