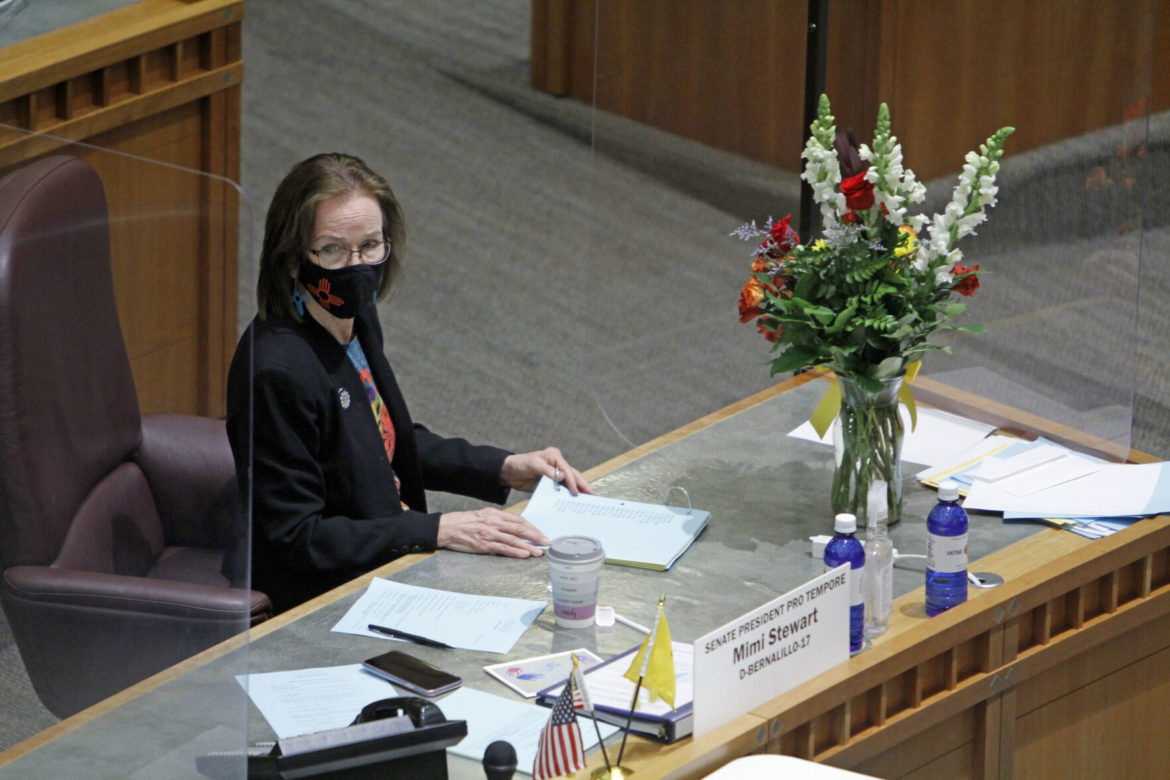 Sen. Mimi Stewart, D-Albuquerque, sits Friday next to a bouquet of flowers on the Senate floor. Sen. Daniel Ivey-Soto, D-Albuquerque, was accused of bullying Stewart on during a floor debate Thursday night. Stewart on Saturday said she plans to develop sensitivity training for senators.

After a floor confrontation in the final days of the legislative session that some lawmakers described as “abusive” and “demeaning,” Senate President Pro Tem Mimi Stewart said Saturday members of the typically civil chamber will have to undergo sensitivity training from now on.

“We’ve all seen what’s happened when we devolve. It’s ugly,” Stewart, D-Albuquerque, told senators at the conclusion of the 60-day session. “No one [wants] to see that. We can all improve in this regard, and I want to help lead this effort for our chamber.”

Stewart said she’ll be working with Sen. Linda Lopez, also an Albuquerque Democrat, and freshman senators “to provide some training for everybody so they can understand their actions.”

During a highly charged Thursday night debate over a controversial paid sick leave bill, Stewart accused Sen. Daniel Ivey-Soto, D-Albuquerque, of being “abusive” in his line of questioning.

After senators took a nearly 30-minute recess to quell the confrontation, Sen. Michael Padilla, D-Albuquerque, said he was “disgusted” by Ivey-Soto’s treatment of Stewart, calling it “bullying.”

Ivey-Soto later apologized to the chamber “if my passion came off as anger.”

Ivey-Soto, who has been much more reserved in the chamber since the incident, could not be reached for comment Saturday afternoon.

During a news conference with Gov. Michelle Lujan Grisham, Stewart repeated her plans to develop sensitivity training for senators “so they don’t have to look in the mirror and think, ‘Wow. Did I really say that? Did I really do that.’ ”

The governor said abusive behavior would not be tolerated.

“We just have to stand up and stop creating environments where it is just too easy to be hostile, angry, sexist, racist and inappropriate,” she said.

If it occurs once, “it is once too many,” she said.

“That will stop in the state of New Mexico, and it will stop right here,” she said. “Every single one of us is going to work hard to make sure that when we expect that out in the world, that New Mexicans should expect that we won’t tolerate it here either.”

Lujan Grisham said part of the solution is dealing with the problem openly.

“It can’t be under the table somewhere, and it no longer is,” she said. “We have a real opportunity, and I expect both chambers will do everything to make sure that that never happens again.”