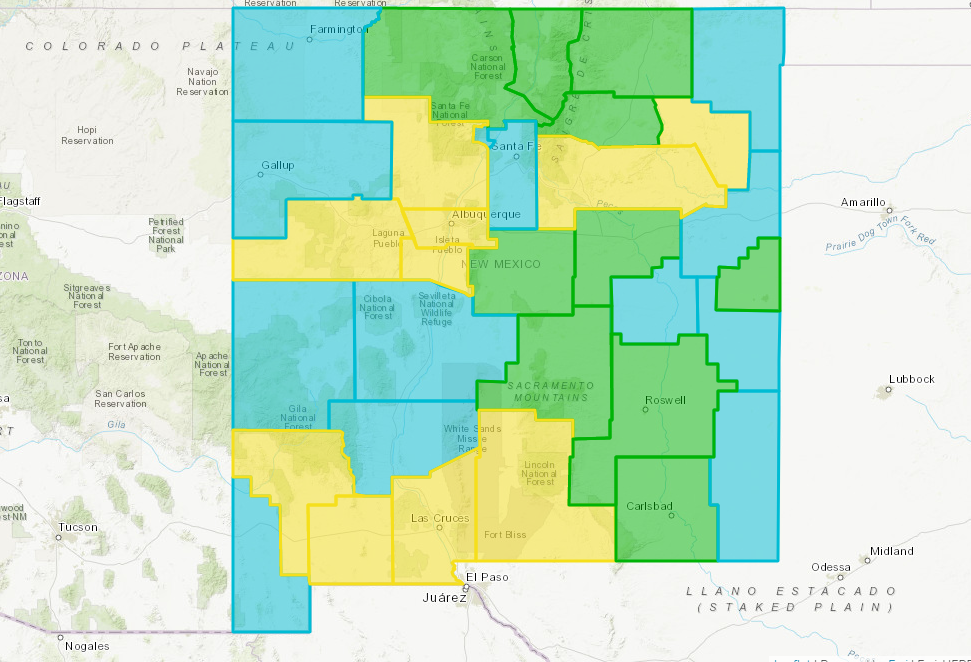 Screenshot of the state's red to green map as of the March. 24 update.

New Mexico hit a new milestone during the COVID-19 pandemic: No counties are currently in the “red” tier of restrictions, the most restrictive conditions.

With Wednesday’s updates, which uses data from the previous two weeks to show which level of restrictions each county sits in, 13 counties are in the “turquoise” level, ten are in green and ten are in yellow.

Counties in the “turquoise” level are those which have been in the green level for two consecutive two-week terms.

Among the high population counties in the state, San Juan and Santa Fe counties reached the turquoise level, while Bernalillo County, Sandoval County and Doña Ana County each are at the yellow level.

The state measures whether, in the previous two week period, counties have 8 or more cases per 100,000 residents or an average percent of positive COVID-19 tests results greater than 5 percent.

Human Services Department Secretary Dr. David Scrase said in a press conference on Wednesday that the state was evaluating its use of positive test percentage, as that continues to remain at very low levels throughout much of the state.

Counties at the less-restrictive tiers are able to have more businesses open, including more indoor dining, retail spaces and recreational facilities.

One reason there are no current red counties is because of an adjustment, potentially temporary, made for low population counties. Harding County was previously in the turquoise level, but would have been in the red level because of an increase in both positivity rate and daily average cases.

The state opted to treat all counties with populations smaller than 6,250 as having that population when it came to cases per 100,000 in regards of gating criteria to avoid swings in those counties from one level to another. This number was chosen because it would allow seven cases in a two week period before breaking the 8 cases per 100,000 mark.

“The two week period is designed because it is the shortest period we can use and still have the data be stable,” Scrase said. “We didn’t want restaurants and churches and other places of worship and all sorts of other gatherings to change back and forth every two weeks.”