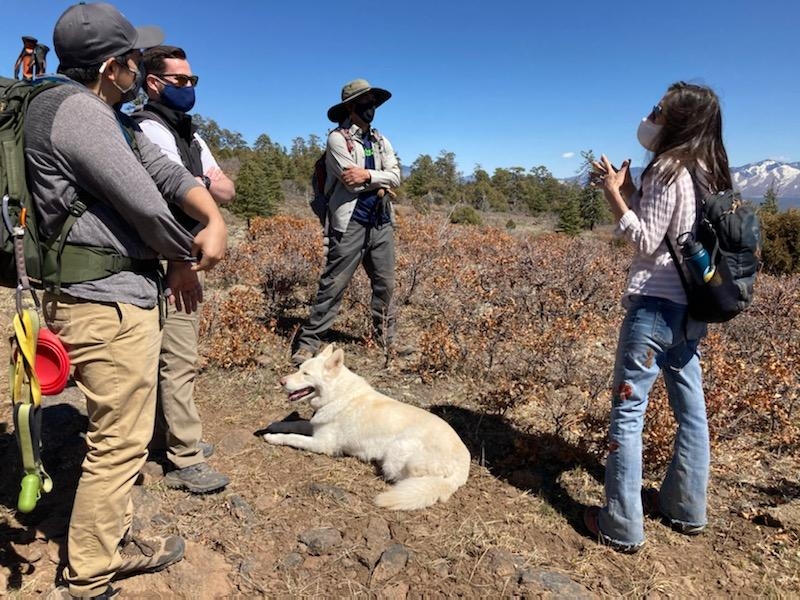 Courtesy of the office of U.S. Rep. Teresa Leger Fernandez

Some places are so special that they deserve the highest level of protection, said U.S. Rep. Teresa Leger Fernandez, a Democrat who represents northern New Mexico.

Cerro de la Olla is one of those places, she said. The dome-shaped caldera already has some protections as part of the Rio Grande del Norte National Monument, however Leger Fernandez is hoping to get it classified as a wilderness area to provide that additional level of protection.

She visited Cerro de la Olla for the first time as a congresswoman this week, where she met with stakeholders including members of Taos Pueblo, county leaders and ranchers. After hearing from them, she climbed up the volcano.

The volcano features grasslands that support wildlife grazing. Leger Fernandez said she saw deer loping along the top and pronghorn near the base. In addition to supporting wildlife populations, Cerro de la Olla is a culturally important place for the people of Taos Pueblo.

Wilderness areas have stronger protections than national monuments, including prohibitions on motorized and non-motorized vehicle traffic.

She said the scars from motorized vehicle traffic were visible on the mountain.

“There’s a desire to allow that scar to recover and to heal,” she said.

The wilderness designation would only apply to Cerro de la Olla and would not include the rest of Rio Grande del Norte National Monument.

Leger Fernandez said existing uses such as gathering of firewood or hunting will continue even if it becomes a wilderness area, however people will not be able to drive their vehicles in the wilderness.

Leger Fernandez, as well as Senators Martin Heinrich and Ben Ray Luján, are calling for protection of Cerro de la Olla as a wilderness area as part of a larger land protection package. The wilderness area would encompass a little more than 13,000 acres within the larger national monument.

She expressed optimism that Congress will be able to get the legislation passed and signed into law.

Leger Fernandez encourages people to explore Rio Grande del Norte National Monument. She said people wanting to visit Cerro de la Olla can park their vehicles near the base of the mountain and hike up to the summit.

She described the hike as “absolutely spectacular” and said people who climb to the top will “understand clearly why it must be protected.”

View all US Congress articles →